MORONI, Comoros – As a midwife, Hadjira Oumouri, 49, spent years advocating for the health and rights of women. Today, she is the second-ever woman Member of Parliament in the Comoros, and currently the only female MP.

Her experience has informed her leadership. Since taking office, she has introduced multiple bills to promote gender equality, and she has worked hard – with success – to gain the support of her male colleagues.

“I think the fight of the woman is every day,” she said. “Politics is also a fight you have to keep fighting.”

Gender inequality remains a significant concern in the Comoros.

In a 2012 survey, about three in 10 women reported they had been child brides. Fourteen per cent of women had experienced physical violence since reaching age 15.

Women also have lower levels of literacy and labour force participation than men, and they face barriers in accessing health care.

Lack of empowerment and access to health care can even be deadly.

According to 2015 United Nations data, some 335 Comorian women die of pregnancy-related causes out of every 100,000 live births. By comparison, in more developed regions, this number is 12. 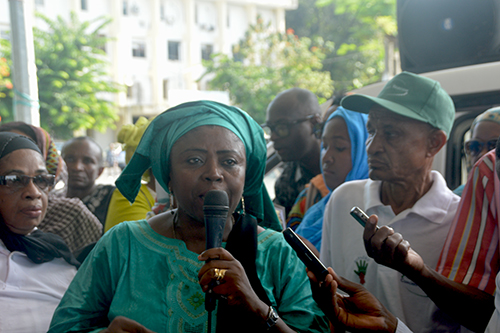 From midwife to leader

As a midwife, Ms. Oumouri witnessed many of these issues first-hand.

In 1995, she began working with UNFPA to raise awareness of family planning in her home region, the remote Mbadjini area. She immediately confronted the challenges women face – particularly lack of information about women’s health and contraceptives.

"It was necessary to go to sensitize the population," Ms. Oumouri said.

She was also an outspoken women’s activist, even creating a women’s association to represent women and girls in Mbadjini.

Eventually, she was appointed mayor of Itsahidi Commune. And in 2015, she ran for a seat in the country’s parliamentary elections.

“What motivated me was that I saw there were a lot of inequalities with women,” she said.

Today, she is the only woman out of 33 members in the National Assembly.

“Even in the nominative positions, you see that there is only one woman minister in the government. Is that enough? I do not believe so,” she said.

Ms. Oumouri sponsored a law requiring gender diversity in appointments made by governors and heads of state. It also calls for political parties’ nominations to include both men and women.

“I thought if we could have a law that can support women, it would be a big step forward. It is also a way of motivating women, of waking up to go and campaign in political parties,” she said.

The law was passed with unanimous support.

Ms. Oumouri has also proposed legislation to combat sexual harassment in the workplace and classroom.

Recognition for work on behalf of women

Today, Ms. Oumouri works closely with women’s associations and gender and reproductive health experts – including UNFPA – to address the needs of women and girls.

In recognition for her work , Ms. Oumouri was nominated for the Pan African Parliament Humanitarian Award for Excellence in Gender Leadership and Advocacy last year.