N’DJAMENA, Chad — About 30 young women gaze with rapt attention as another recounts the story of a rural girl cast out of her family’s home after becoming pregnant. Colourful picture cards help illustrate the dramatic tale and lead the way into a lively discussion on AIDS and family planning. 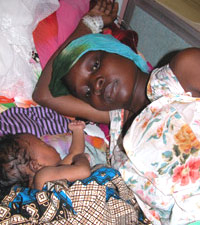 Preventing HIV in Chadian women and their children is a high priority.

Sylvie Minandi travelled three hours over bad roads from her village in Moulkou to attend the gathering, part of a microcredit and reproductive health programme supported by the Ministry of Social Action and the Family and UNFPA, the United Nations Population Fund. She is one of a number of young women volunteers working with the youth of her village to teach them about HIV prevention and other reproductive health issues.

“Before they don’t talk about these subjects, but after they want to speak out. In that way, we can change behaviour,” Sylvie said. “If young people are left with the adults they are ashamed to talk in front of them. If they’re with friends, they can speak together without any problem.”

"If young people are left with the adults they are ashamed to talk in front of them. If they’re with friends, they can speak together without any problem."

About 4.8 per cent of the population of Chad are living with HIV, according to 2004 estimates by UNAIDS. As in many societies in sub-Saharan Africa, girls are disproportionately affected: Within the region as a whole, 76 per cent of the young people (aged 15-24 years) living with HIV are female. UNFPA is working with the Government of Chad to teach girls and women how to protect themselves against the deadly disease.

The girls and women, dressed in vividly patterned robes and head scarves, are eager to show off their wares to visitors, from hand-made soap to embroidered fabrics to spices and fruit syrups that perfume the hot air with their sweet aroma.

Money generated by their homemade goods is being used to finance their children’s education and buy clothes and medicine for their families. Improved economic status translates into improved social status within their villages, and participants are more likely to take an active role in defending their interests at the community level. 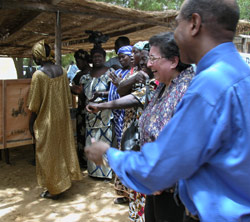 “Rural women weren’t organized before,” Ms. Golo said. “We help them manage their resources and transform their villages.”

Women make up 52 per cent of the total population. But like many African countries, Chad has its share of gender inequities. Approximately 46 per cent of girls attend school compared to 68 per cent of boys, and many women remain illiterate. Traditionally, women have limited say in the decision-making process and how household resources are allocated. They may also be subject to violence and abuse.

UNFPA’s gender programme in Chad is dedicated to reinforcing the technical capacity of government institutions in charge of promoting women’s rights and improving women’s access to resources, particularly for rural women. Approximately 79 per cent of Chad’s population is rural.

“I was impressed by the spirit of these women – they are strong and sure of themselves,” said Ms. Obaid. “This project follows the international trend: when women have access to resources, it ultimately goes back to the family. We can always argue that educating women and providing income generation helps not only women, but also their families and ultimately their community.”

UNFPA is working with the government to promote the improved status of women in society through education on reproductive health, including birth spacing and sexual education for young people, microcredit, girls’ education and the promotion of youth leaders. To date, more than 500 rural villages have been targeted through the microcredit and reproductive health programme.

“We see many cases of women dying. We have many cases of infanticide – if the girl has the baby she throws it away. We have to fight this,” said Toubaro. “These women are illiterate, so we use images to convey our messages. This way, we can work to stop abortions and teach them to space their children.”