Meeting reproductive health needs in the wake of Cyclone Pam

PORT VILA, Vanuatu – “We lost everything. All the clothes – gone,” Anna Naual said at an aid post in Fresh Wind Ohlem, a settlement near Vanuatu’s capital, Port Vila. The single mother, who works in a hotel in the city, says the roof of her house was blown off when Cyclone Pam struck the island nation two weeks ago. She and her sons, ages five years and five months, lost the bulk of their possessions to flooding.

Ms. Naual and her sons were waiting at an aid post set up by the Ministry of Health, UNFPA, and other partners. There, an outreach team of health workers was providing reproductive health services for disaster-affected women and girls, including dignity kits containing essential hygiene supplies. 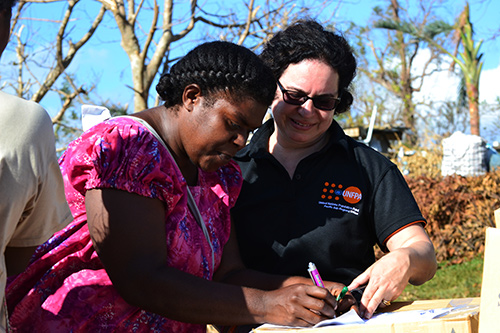 Maha Muna, a UNFPA gender adviser, with a woman at the dignity kit distribution in Fresh Wind Ohlem. © UNFPA/Ariela Zibiah

The team expected around 40 pregnant women and new mothers, but more than 100 women and their children arrived, nearly overwhelming the outreach personnel.

Cyclone Pam is thought to have been one of the worst natural disasters in Vanuatu’s history. Some 166,000 people on 22 islands have been affected, according to the most recent UN reports, and an estimated 15,000 homes have been damaged or destroyed.

Food, water and other necessities are urgent priorities, and the need for sexual and reproductive health services is increasing.

In its initial response, UNFPA worked with the Vanuatu Ministry of Health to deploy staff and 400 prepositioned dignity kits. UNFPA is also partnering with the Vanuatu Association of NGOs, a local body of community-based organizations, to help provide maternal health services, adolescent reproductive health programmes, and gender-based violence prevention and response initiatives. 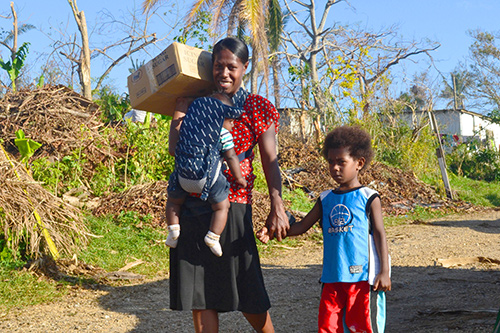 Anne Naual carries home a dignity kit, which is packed in a donated box. © UNFPA/Ariela Zibiah

The reproductive health kits will also provide supplies for post-rape care, as gender-based violence often increases in the aftermath of emergencies.

A lengthy queue formed at the aid post in Fresh Wind Ohlem, winding down the dirt road and blocking traffic. Dozens of families waited patiently in the shade of brightly coloured umbrellas.

Many had come for UNFPA’s dignity kits, which include sanitary pads, soap and other essential supplies for women and girls of reproductive age. The kits also contain a flashlight, an important addition as the community is still without electricity.

"This area has not received power since the cyclone," said Betty Iman, 34, who is pregnant with her third child. She received antenatal care and a dignity kit from the outreach team.

“We… saw a lot of women and children who were given supplements, multi-vitamins and deworming tablets," said Apisai Tokon, head of the reproductive health and family planning unit at the Department of Public Health. 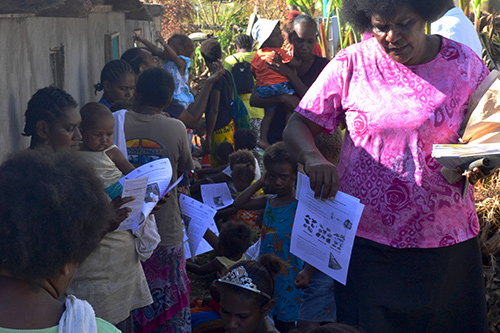 Despite the crowds and scorching heat, people were in good spirits.

"The people of Vanuatu are proving once again how resilient they are after Cyclone Pam practically destroyed five of the six island provinces in the archipelago," said Maha Muna, a UNFPA gender adviser on the outreach team.

As they closed down the post, the team reflected on the unexpected volume of need they had encountered – but also the strength and goodwill of the people they had met.