SANA'A, Yemen – Bushra was only 14 years old when her family arranged a child marriage to an older man, and a year later she became pregnant. She was a mother of six when her husband lost his job.

Suddenly the family could not make ends meet in war-torn Yemen, where the economy had collapsed.

At first she had to pull her kids out of school and teach them at home. Bushra worried about how to buy school supplies like books.

Months went by without her husband finding any work. The lack of income put severe stress on Bushra's household. They could not afford anymore to pay for rent, water or electricity, as well as essential items such as food and clothing.

"I could not bear my life. We had nothing," she said. "So I started to look for a solution for my family."

During her search, Bushra came across books on the private security business, and on the origins of successful women entrepreneurs. She did more research online, and asked people with experience for advice.

Bushra then learned about Springboard, a UNFPA-supported programme funded by the governments of the Netherlands, Sweden and Switzerland that aims to empower women by helping them create livelihoods for themselves in 30 countries, including Yemen.

She visited the office and pitched her idea for a women-run private security firm. Bushra was delighted when the organization agreed to provide her with a grant to start her business and training to help run it. Springboard trainers help women identify their personal and professional goals, and support them to develop the skills they need to achieve those goals.

She spent the money on buying uniforms and other supplies like electronic metal detectors to equip five women with the best available gear for the job, and prepare them to become guards.

But she still had doubts.

“At first I hesitated. There was an internal frustrated voice telling that me I would fail, that I should give up, that I would lose this money. That I would not succeed," Bushra said. "However, I pressed on. I challenged myself. I told myself that I had to become something. I had to prove to the whole world that yes, I can.”

With the grant she received, Bushra managed to launch the first ever women-run security business in Yemen. Her team now helps protect women at weddings, big exhibitions and bazaars in a country where this job was until then only performed by men.

Launching the firm was no easy feat for Bushra, who had to fight to convince her own family about her plan.

Her family argued that women should stay at home; women should not wear a military uniform, nor carry the same weapons used by men. Bushra's family objected to her running her business while being a mother and housewife.

"The challenge was really big in terms of how I would be able to distribute my time between my family and my work," she said.

Despite facing criticism from members of her community, Bushra insisted on opening her security office – and proved them all wrong.

Thanks to the private security business, Bushra enjoys a steady income and provides her family with clothing, food and drink. Helping women protect women in the end helped protect her own kids, too.

“Their lives have become better than before," says Bushra. "Now my children live like the rest despite the general bad situation in Yemen."

"When I finish my work and go to my house, everyone welcomes me with great joy. After I have succeeded, everyone is courting me and trying to be closer to me.” 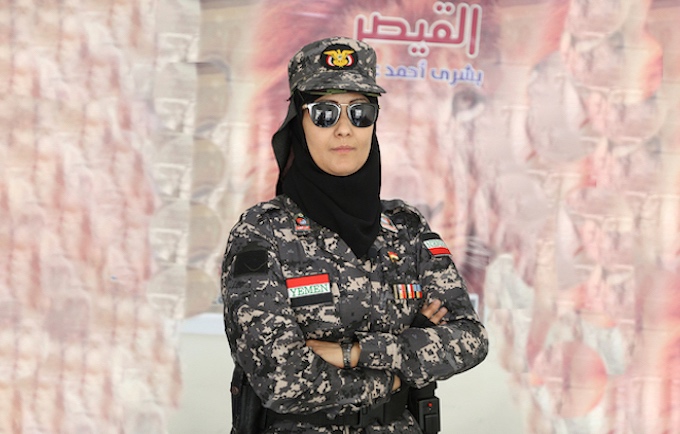