Nearly 800 women continue to die every day from pregnancy and childbirth. Not enough is being done to prevent adolescent pregnancies, sexually transmitted infections, HIV and gender-based violence, all of which endanger the lives of women and girls.

“Relatively simple and well-known interventions, like midwifery services and gender-based violence prevention and response, can make a huge difference if scaled up and coupled with investments in innovations, especially in the area of contraceptives,” said Kate Gilmore, Deputy Executive Director of UNFPA, the UN Population Fund.

The new data, published in Trends in maternal mortality estimates 1990 to 2013 , comes from an inter-agency group that includes UNFPA, the World Health Organization (WHO), the United Nations Children’s Fund (UNICEF), the United Nations Population Division (UNPD) and the World Bank Group. The figures were produced through an academic collaboration with the National University of Singapore and the University of California, Berkeley. 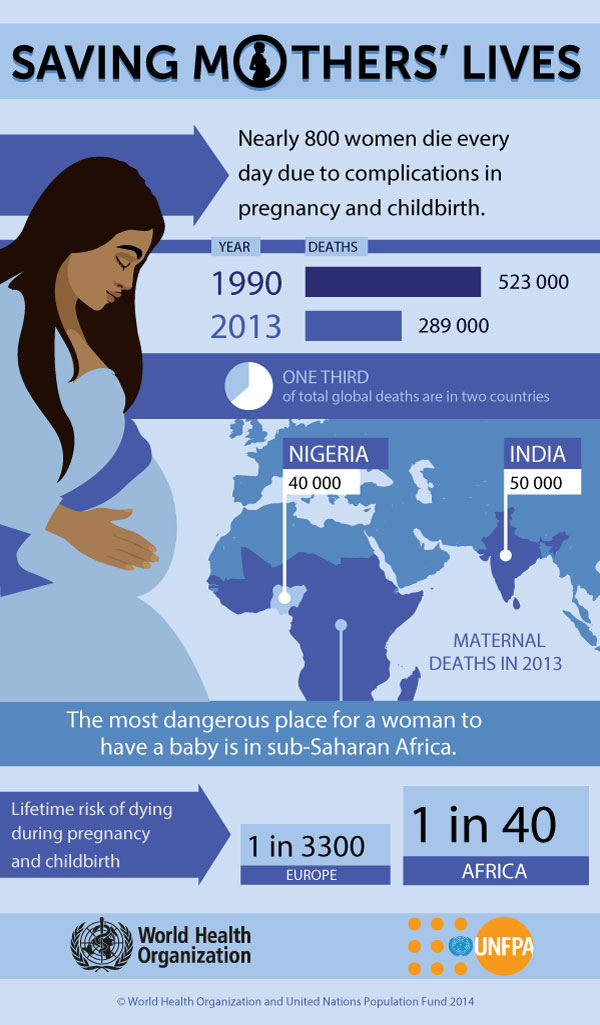 The data, which come from dozens of studies and improved methods of estimating births and deaths, are considered more reliable than previous assessments.

It also shows that sub-Saharan Africa is still the riskiest region in the world to give birth. Chad and Somalia have the highest lifetime risk of maternal death – 1 in 15 and 1 in 18, respectively.

Still, there are bright spots in the report.

What more can be done?

Health systems must be strengthened, with quality facilities, personnel, equipment and medicine made accessible to all women. Comprehensive sexuality education and services for young people must also be made available.

But healthcare solutions are not enough. The human rights of women and girls must also be prioritized.

“More than 15 million girls aged 15 to 19 years give birth every year – one in five girls before they turn 18 – and many of these pregnancies result from non-consensual sex,” Ms. Gilmore stressed. Adolescent pregnancy carries a heightened risk of injury and death.

More accurate data are also needed; it is believed that only one third of all deaths around the world are recorded.

Still, with the release of this new data, more is known about how many women are dying, and more is also known about the reasons behind their deaths. This will help policymakers and public health officials design better interventions.

"Thirty-three maternal deaths per hour is 33 too many," said Tim Evans, a health director at the World Bank Group. "We need to document every one of these tragic events, determine their cause and initiate corrective actions urgently."