It is off the grid and lacks running water, and it is cut off from the outside world for four months each year, when heavy rains turn roads into rivers of mud.

Yet there are signs of progress. Solar panels are popping up around town. And Agnod – who, like many people in this rural area, goes by only one name – is helping families to have fewer children.

“Now most families are having no more than four," he said. 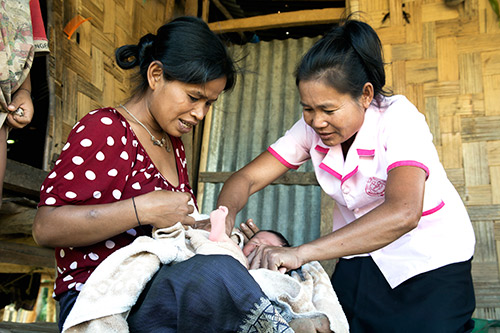 Agnod is a family planning volunteer, trained by the health ministry and UNFPA to counsel men and women on their sexual and reproductive health. He also provides contraceptive pills and condoms, and, when needed, refers people to health facilities for further care.

He is one part of a nationwide effort that has dramatically reduced maternal death rates in the country – from the ground up.

Pregnant women in the country face significant risks. A woman’s risk of dying from pregnancy-related causes is 1 in 150, according to a recent UN publication. By comparison, a woman in Europe has a 1 in 3,400 risk of dying from maternal causes.

Yet these risks used to be much greater: the Lao People's Democratic Republic reduced its maternal death rate by 78 per cent between 1990 and 2015, according to the UN report.

"We're in third place worldwide in terms of bringing down the maternal mortality rate," said Eksavang Vongvichit, the country’s former health minister. "Since 2005, we've brought down the number of maternal deaths from 450 out of 100,000 live births down to 220."

Helping women adequately space their births – so they can fully recover before becoming pregnant again – also improves women’s health. And by helping families plan for their futures, these services can help them escape poverty.

Agnod is one of 32 volunteers trained to distribute contraceptives in Savanakhet Province. "Each one covers three to five villages, so they reach the most remote areas," said Bongsouvanh Phanthavongsa, Savanakhet’s deputy health director.

Agnod serves his village and four nearby communities. "I've helped over 300 families so far," he told UNFPA.

Twenty-year-old Du was counselled by Agnod. She lives in Labangkhok with her two young sons. "I didn't use family planning before he started this," she said, pointing at Agnod. "But I decided to get a [contraceptive] injection for three years. I want my sons to grow up a bit before I have another one." 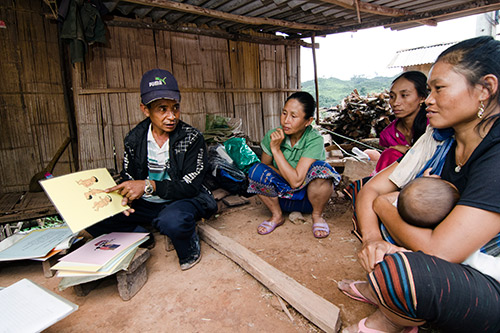 UNFPA is also helping to train midwives to international standards.

"Just a few years ago, there were no midwives or midwifery teachers in Laos," explained Anna af Ugglas, a UNFPA midwifery specialist. "Obviously, that had a serious impact on the safety and quality of the care given to mothers and newborns around the country."

Keeping the momentum up

Health experts now want to make sure the country keeps up its momentum.

"We're boosting standards of health care and improving hospitals at both the central and district levels," Dr. Eksavang said. "Governance is a big issue in health-care reform, so we're also looking at administration, financing and managing our resources better."

The difference is apparent even in rural Savanakhet. There, 30-year-old A-Daeng has just delivered her fourth child in a clinic near Labangkhok.

"The care got better each time," she says. "When I gave birth to my third and fourth children, they cared for me before birth, helped clean my body and visited us at home after delivery. They also told me to eat well, breastfeed and gave me advice on birth spacing."