As Many Afghans Head Home, UN Assists Refugees Who Remain in Pakistan

SHALMAN REFUGEE CAMP, Khyber Agency, Pakistan -- Tens of thousands of displaced Afghans are returning home on the road from Peshawar to Jalabad. But in this desolate place not far from the border, thousands more are settling in. 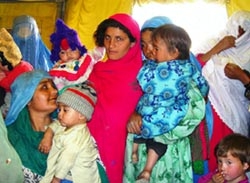 Inside a large tent, the only form of shelter available here against the relentless sun and chilly nights of this remote and barren mountain region, a weary refugee complains of discomfort in her swollen abdomen. It is stomach pain; for once, she is not pregnant. The woman has borne nine children, four of them stillborn. She is 30 years old.

A female gynaecologist is examining the woman. A dozen others are waiting to see the doctor, most carrying small children.

More waiting mothers, wrapped in blue burkhas, are sitting with their children outside the medical tent. Inside, they will receive pre- and post-natal exams, kits for safe childbirth inside their own tents, family planning advice and, if they want them, contraceptive pills or injections. The United Nations Population Fund (UNFPA) provides the delivery kits and family planning supplies to the UN refugee agency, UNHCR. 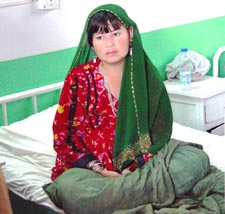 Available medical care is one of the few amenities in this orderly but austere tent city, currently home to 20,000 refugees. The nearest town is many kilometres away, over the mountains. There are 3,576 tents, 865 latrines and 373 washrooms. Each tent houses up to eight people.

The camp has three basic health units, two dispensaries, five doctors, three "lady health visitors" who attend deliveries inside tents, and an ambulance that can take emergency cases to a hospital two hours away. Five primary schools-four for boys and one for girls-opened recently.

Most residents were resettled here in January, when the notorious Jalozai camp was closed. But new arrivals, who have come voluntarily to escape squalid living conditions in Peshawar and other Pakistani cities, sit on the ground awaiting registration. Some came to Pakistan late last year, but others have been refugees for much longer.

Each arriving family is assigned a tent, and given a UNHCR relief package containing kitchen ware, bread pans, water cans, a stove, blankets, floor sheets, quilts, and kerosene for cooking and heating. The World Food Programme regularly delivers flour, cooking oil, tea and other food supplies. There is a supplementary feeding centre for pregnant women, people with tuberculosis and other hardship cases.

"Water is a major problem," says UNHCR field officer José Belleza. "We dug a well but it came up dry." Tankers deliver water pumped from a river seven kilometres from the camp. Nature can also deliver the unexpected; a freak snowstorm a few weeks after the camp opened cut off food and water supplies for several days.

Conditions are a bit better and the landscape is not quite so harsh at the new Shamshatoo camp near Peshawar, which opened in 2000. Refugee families have built mud and brick huts, and there is a six-room health centre where women can give birth. Family planning options include IUDs as well as pills and injectables.

Emergency obstetric cases are sent to the 100-bed Jihad Hospital (named by the anti-Soviet mujahedin who started it in the 1980s), which is supported by UNHCR and Ibn Sina, a non-governmental relief agency. UNFPA provides reproductive health supplies and equipment for the delivery room.

The Population Fund is also supporting the Afghan Institute for Learning, which provides literacy classes and health services to women in another refugee settlement outside Peshawar.

There are some 2 million Afghan refugees in Pakistan, a tremendous burden for this poor country. Some left Afghanistan last fall; others fled the factional fighting of the 1990s or the Soviet invasion before that. But after 20 years of war, the migration tide has finally started to reverse. 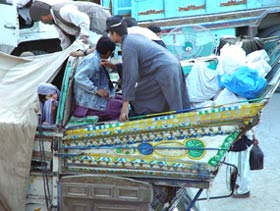 In Torkham, a few kilometres up the hill from the Shalman camp, a steady procession of brightly decorated trucks and buses, packed with returning refugee families and their possessions, rolls through the spectacular Khyber Pass and down the winding road to the Afghan border.

Up to 10,000 people a day are returning to Afghanistan despite continued political and military uncertainty, and drought in much of the country. UNHCR and Pakistani authorities are collaborating in the repatriation effort, advising the returnees about safety conditions in their home regions and providing $100 for each family of five.

Many of the returning refugees are headed for war-ravaged Kabul, where housing is scarce and services, particularly health facilities for women, are stretched. UNFPA is working with Afghanistan's Ministry for Public Health to expand women's access to lifesaving reproductive health care (see article).

Abdelamid, 32, a former Kabul schoolteacher, is going home with his wife and two young children after eight hard years in exile. Waiting with hundreds of other families at a repatriation centre outside Peshawar, he voices hope that Afghanistan's fragile peace will hold and that the loya jirga due to convene in June will lead to a stable government.

"It is time," he tells a visitor. "Life as a refugee is too hard. I want my children to grow up in Afghanistan"--he wants four children, eventually. "And I want to help rebuild my country."