DEDZA, Malawi — Faustina, aged 40, lies swaddled in a thick blanket in the maternity ward of Dedza District Hospital, in Malawi. Although she has just lost a baby, delivered through Cesarean section, she considers herself lucky to be alive.

This was Faustina’s twelfth pregnancy. Although she has borne 9 children and endured two abortions, she prayed for this delivery to be normal. So, as soon as felt labour pangs, she reported to the Bembeke Catholic Health Centre. Because she was bleeding heavily, she was immediately referred to the Dedza District Hospital for expert attention. That decision saved her life. 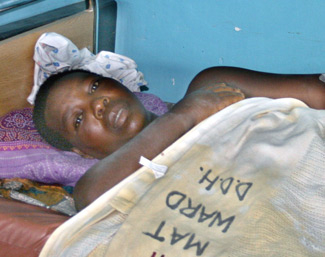 Even though her baby died, Faustina is fortunate that she did not become another statistic in Malawi’s ongoing maternal mortality tragedy. In Chichewa, Malawi’s principle language, the words for pregnancy -- “pakati” and “matenda”-- translate into “between life and death” and “sick”, respectively.

"Not very long ago, pregnancy and childbirth were a death sentence. That is long gone now. And we plan to keep it that way."
--Mr. Dzoole

The maternal mortality rate in Malawi currently stands at a staggering 1120 deaths per 100,000 live births, according to Dr.Chisale Mhango, Director of the Reproductive Health Unit in Malawi’s Ministry of Health. That’s almost twice as high as the rate in 1992 – 620 per 100,000. Some 6000 Malawi women are dying each year from preventable or treatable complications of pregnancy.

Dying to give life

Early and frequent childbearing leaves women vulnerable to complications. The mean age at first childbearing in Malawi is 19 years and the total fertility rate is 6.3 children. Even so, skilled care at deliveries and timely high quality emergency obstetric care could prevent most maternal deaths.

But Malawi is one of the world’s least developed countries – it ranks 164 out of 177 countries surveyed on UNDP’s Human Development Index – and its healthcare system is not functioning well. Health care workers are overstretched and underpaid. The AIDs epidemic has strained services and claimed trained personnel. Equipment, medication and other supplies are inadequate or lacking. Referrals do not work smoothly.

The Dedza District with an estimated population of 624,000 has 31 health centres and only one government referral hospital staffed by two UN Volunteers medical doctors, seven clinical officers and 48 nurse/midwives. Eleven nurse midwives struggle to provide 24-hour care in the maternity unit.

These problems are compounded by cultural practices that inform a woman’s decision to seek care. In some communities in Malawi, a woman in labour must seek a man’s authorization before going to the health centre. 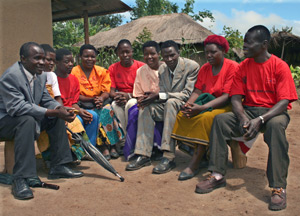 Some members of the Magwaza Village Health Committee during a strategy meeting. Photo: George Ngwa/UNFPA

Of crucial importance to strengthening healthcare delivery and rolling back maternal deaths in Malawi is the role of village communities. “Taking healthcare to the communities is one of the most effective ways of reducing maternal and infant mortality,” explains Juliana Lunguzi, a programme officer for UNFPA, the United Nations Population Fund, in Malawi. “The idea is to empower village communities, including men, women and young people to take care of their own healthcare. Since this is an inclusive process involving collective decision making, it ensures that appropriate and timely actions are taken when there are complications in pregnancy and childbirth.”

In Magwaza village, Dedza District, the Village Health Committee supported by UNFPA, has established various task forces – such as family planning, safe motherhood and sanitation. The community has adopted by-laws that set limits on the role that traditional birth attendants should play. For example, they prohibit birth attendants with no formal training from actually delivering babies and encourage them to adhere to government-set criteria about when to call for skilled attendance. 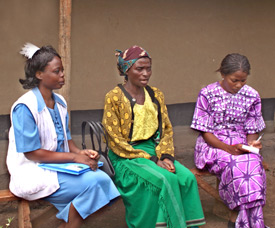 Some of the rules and messages are written on walls of homes in the village. The committee monitors adherence to the rules and any transgressor is fined a goat for attending a home birth.

Mawandiwe Mtchauya, is a traditional birth attendant who has been trained by UNFPA to identify pregnancy-related, complications that could threaten a woman’s life. She no longer delivers babies, but she does monitor the progress of pregnancies and refers women in labour to the nearest clinic in Chitowo village or to the District hospital. She now makes a living by counselling women on contraception, child spacing, and HIV prevention. She does not regret the change of profession and proudly points out that no pregnant woman has died during her watch. Mr. Dzoole, the village headman concurs: “Not very long ago, pregnancy and childbirth were a death sentence. That is long gone now. And we plan to keep it that way.”

Her assertion is corroborated by figures from the Chitowo Health Centre which covers 110 villages with a population of 37,000. According to nurse Elimase Kamanga no maternal deaths were registered in the catchment area in 2006 and only one in 2007. At the district level, Ms. Julie Chirwa, Deputy District Health Officer of Dedza District Hospital points to a steady decline in maternal deaths from 33 in 2005, to 18 in 2006 and 7 in 2007. She lauds the community initiative for timely referrals and the decline in maternal deaths.

Juliana Lunguzi of the UNFPA is elated by the overall results of the initiative. According to her, “in a society steeped in traditional and cultural beliefs and practices, success in health service delivery is dependent on strong community involvement. Use of existing community systems and structures enhances acceptability of new ideas and promotes unity of purpose.”

Mapping out a road to better maternal and newborn health

Eager to stem the maternal mortality crisis, the Malawi government has partnered with UNFPA, WHO and UNICEF, to develop a country-wide Road Map to accelerate the attainment of Millennium Development Goals related to maternal and newborn health. One key objective is to increase the availability, accessibility, use and quality of skilled obstetric care to ensure safe pregnancies and healthy newborns. The other is to strengthen the capacity of individuals, families, communities, civil society and government to improve maternal and neonatal health.

These objectives are translated more concretely into specific strategies and interventions, including improving the availability of, access to and demand for quality maternal and neonatal healthcare; preventing mother-to-child transmission of HIV during pregnancy and nursing; providing family planning services; strengthening human resources to provide quality skilled care; improving the referral system; empowering communities to ensure the continuum of care between the household and the healthcare facility; and addressing adolescents’ sexual and reproductive health.