OGAN KOMERING ILIR, South Sumatra, Indonesia—When Kawit’s third childbirth did not go smoothly, Yuniar, the midwife in Sukapulit village, realized the problem was obstructed labour and knew what to do.

Yuniar took 150,000 rupiahs ($15) from her emergency funds and hired a truck to take the patient to the nearest hospital for a Caesarean section. On the way, she used a mobile phone to alert hospital staff. A village volunteer, previously identified as having the same blood type, accompanied them to the hospital in case Kawit needed a transfusion. Both mother and infant survived. 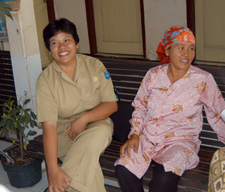 Kawit’s rescue was due to the Mother Friendly Movement, a national initiative that has significantly reduced maternal death and injury in Indonesia over the past 15 years. In the late 1990s, the campaign put trained midwives in tens of thousands of remote villages like Sukapulit. More recently, it has provided 'mini-grants' to villages that are 20 kilometres or two hours distant from obstetric delivery facilities. A portion of the money is managed by the midwife to arrange emergency transport.

Yuniar used the funds 13 times between last October and June this year. “This programme is very helpful,” she says, “because the village has many poor couples.”

A safe motherhood committee conducts monthly educational activities. Midwives say the education of husbands since 2001 has resulted in earlier action to get help when complications arise.

The effort is supported by UNFPA, the United Nations Population Fund, which has given assistance to improve reproductive health care in the district. UNFPA has funded the Mother Friendly Movement since 1997, upgrading health facilities in four pilot provinces, training midwives to diagnose and manage complications of pregnancy and labour, and helping make communities and families aware of the need for rapid action in such cases to save women’s lives.

In 2003, Ogan Komering Ilir was selected as a model district for UNFPA funding to improve maternal health and develop a more integrated approach to reproductive health services.

Maternal mortality remains a serious problem in Indonesia, estimated variously at 230 or 307 deaths per 100,000 live births nationwide and even higher in some places. But progress has taken place. In 1990, there were an estimated 650 maternal deaths per 100,000 births in Indonesia. The Millennium Development Goals (MDGs), the international community’s targets for alleviating extreme poverty, call for reducing the maternal mortality ratio by three quarters between 1990 and 2015.

Under the Mother Friendly Movement, coordinated by the Ministry of Women’s Empowerment, half a dozen ministries collaborate with grass-roots groups to make childbirth safer. The Movement has used mass media and other channels to raise public awareness of the deadly 'three delays' that threaten women giving birth: delay in identifying the signs of obstetric emergency, delay in reaching service delivery facilities, and delay in receiving assistance at the delivery points.

Mini-grants are provided just once to a village, as seed money to create a system for responding to obstetric emergencies. To sustain the effort, villagers are expected to develop credit schemes, such as encouraging savings by families of pregnant women. This has worked in some villages but not all, and in the poorest ones transport may not be available for women experiencing delivery complications.

And despite past success in increasing the number of midwives working in villages, nearly one third of Indonesian women still give birth without skilled assistance. Health care was decentralized in 2000, and the availability and quality of services vary considerably throughout the country.

Integrating safe motherhood with family planning and other reproductive health services is a top priority for UNFPA in Indonesia. 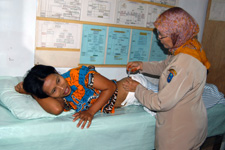 Health centre nurse gives a contraceptive injection to mother of three who wants to avoid another pregnancy. Photo: William A. Ryan/UNFPA

Besides ensuring that all women have access to skilled delivery assistance and to emergency obstetric care when needed, countries like Indonesia can reduce maternal mortality and morbidity by increasing the availability of family planning and birth spacing services. Providing such services to those who want to delay their next pregnancy but are not currently using a contraceptive method – some 200 million women worldwide – could cut maternal deaths by 25 per cent.

In Kawit’s case, she was offered different family planning options after giving birth. She opted to take oral contraceptives because her first choice, an implant, was not available.

At an integrated health post, or puskesmas, in the district, midwives examine pregnant women and those who have delivered recently, offer confidential counselling about family planning, and provide services when desired.

The midwives can attend deliveries in the puskesmas, which has an ambulance for cases that need to be referred to a hospital.

The puskesmas offer various other reproductive health services including pap smears and, in a separate clinic room, confidential care for adolescents, who learn about the programme in a school outreach effort.

As a result of the district’s success in providing quality, integrated reproductive health care, it will continue to serve as a model in the new UNFPA country programme starting next year.

“Making motherhood safer and improving reproductive health services are serious challenges in Indonesia, due to gender-related issues, widespread poverty, weak infrastructure and the isolation of many rural areas,” notes UNFPA Assistant Representative Martha Ismail. “But we have seen real commitment to addressing these issues and are confident the country will continue to make progress.”