DOMIZ 2, Iraq – “I never thought I would have to start over,” Nermin* told UNFPA from Domiz 2 Camp in Iraq.

She was 21 when she was uprooted from her hometown in Qamishli by the horrors of the Syrian conflict. It was 2012, and she had been studying to become a teacher. “The war forced me to choose between my dream and my life,” she said.

She travelled with her parents and siblings to a refugee camp in Dohuk, a city in the Kurdistan region of Iraq. But she could not fully escape the violence she had witnessed.

“I had a difficult time adjusting to my new life. I would barely sleep during the night, and I would force myself to stay awake because the moment I closed my eyes, I would see the faces of all those who were killed in front of me,” she said. “It was haunting.”

But a year later, hope returned to her life: She fell in love.

“A few months later, we got married and settled in Domiz 2 Camp in Duhok,” Nermin said.

They made their tent into a home. Their first son, Salim, was born three years ago. A year later, Nermin was pregnant with their second son, Samer.

Still, life was not easy. Nermin did not receive regular antenatal care during either pregnancy.

When it came time to deliver her second baby, she visited a UNFPA-supported maternity ward in the camp.

“I get very emotional recalling that day,” Nermin explained recently. “Samer’s umbilical cord was wrapped around his neck. The doctor kept reassuring me that it wasn’t serious, but all I could think of was that I was losing my child.”

After all the trauma she had experienced, the fear was overwhelming.

“At that moment, I felt the world just stopped and the few minutes that passed felt like an eternity. I couldn’t feel my heart beating anymore and broke into heaving sobs while the medical team was asking me to breathe. I only felt alive again when I held Samer in my arms.”

She felt instant relief when she saw he was all right: “He was so small and beautiful,” she said.

Support for mothers and newborns

UNFPA is working with partners to ensure quality reproductive health services are available to those who need it – even in sprawling displacement camps.

In Domiz 2, UNFPA operates the maternity unit as well as a reproductive health clinic. The maternity ward where Samer was born is one of eight health facilities supported by the Government of Norway.

This reproductive health care includes not only antenatal care, safe delivery services and post-partum care but also family planning counselling and services. UNFPA also supports a youth centre and women’s social centre in Domiz 2, where a range of psychosocial care is available for survivors of violence and trauma.

Looking after body, mind and future

“After my delivery, I sat with the gynaecologist who explained to me the importance of regular visits to the health clinic during pregnancy,” Nermin said.

Doctors also encouraged her to visit the women’s social centre to learn about the available psychosocial services.

Today, she is again expecting.

“I am pregnant with my third child, who I hope is a girl,” she told UNFPA, cradling her belly.

She is working hard to take care of herself. “I conduct regular visits to the reproductive health clinic to anticipate any possible problems, and to improve the chances of having a healthy baby and safe delivery.”

She also knows that this is the family size she wants.

“This, however, will be my last child for now,” Nermin said. “After I give birth, my husband and I agreed to visit the clinic and receive family planning sessions. Life is complicated in the camp, in the tent, and this is not the environment where I wish to raise my children.” 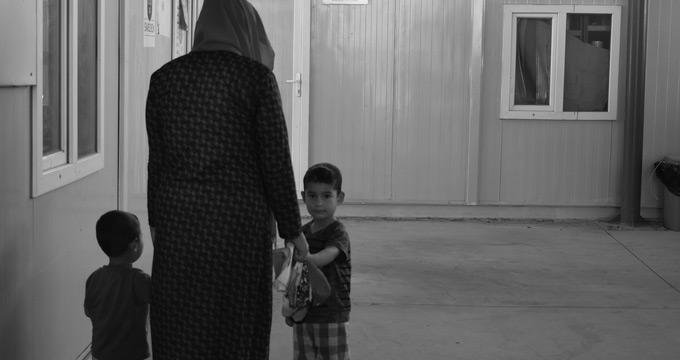