Afghan women from all walks of life must be part of designing the humanitarian response, and male leaders should encourage their inclusion, says relief worker Sippi Azerbaijani-Moghaddam of the Women’s Commission, an international NGO which works with refugee women and girls. 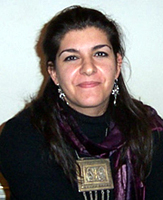 “When the white Land Cruisers with the UN logo emblazoned on the side roll into a refugee camp, they are greeted by the leaders of the community. The women and girls stay inside,” says Sippi Azerbaijani-Moghaddam, a relief worker with the Women’s Commission and a seven-year veteran of working with vulnerable women and girls in refugee camps in Asia, notably among Afghans in Afghanistan and Pakistan.

To most refugee communities, Ms. Moghaddam says, the United Nations stands for high-level talks and big money, neither of which fall into the roles traditionally associated with women and girls. For that reason, women and girls are often excluded by default in the assessment of emergency needs, as well as the planning and deployment of essential services intended to protect women’s health, security and human rights.

“Local women’s NGOs are more approachable to these women because they are rooted in their own communities. They are part of daily life in the camps, and often are able to immediately identify which groups of women are at risk, the type of risks the women face and what to do about them,” Ms. Moghaddam told a technical meeting on the Impact of Armed Conflict on Women and Girls organized by the United Nations Population Fund and held 13 – 15 November in Bratislava, Slovakia.

When Ms. Moghaddam visits Afghan refugee camps, she makes a point of leaving her car, radio and guards, if any, at least ten minutes’ walk away from the camps. She walks straight into the tents and talks to women and girls about life in the camps and what their needs and concerns are. Had she arrived by car, the perception of her visit would immediately change to one calling for the male leaders to approach her, not the women and girls. That, she says, would severely curtail her ability to have a frank and personal discussion with the refugee women and girls.

“Some community leaders and local relief staffers do not accurately reflect the sentiment of women and girls because they come from different social classes, regions and ethnic backgrounds than those of the refugees. Some will say that family planning and fertility cannot be discussed, while the first thing women ask for is how they can avoid unwanted pregnancies or how they can regain fertility lost to sexually transmitted infections,” Ms Moghaddam said.

In one camp, Ms. Moghaddam recounts, engineers wanted to place baths near the edge of the camp because the location offered ample space and easy access for water trucks. However, the engineers neglected to consider whether women and girls would use them in that location. A survey of the refugee women conducted by an Afghan women’s NGO showed that they were uncomfortable with the remote location, concerned for their safety during use and preferred a location near the middle of the camp.

“There is often a perception that if you talk to any Afghan, he or she can tell you everything about the culture and what needs to be considered in the programmes and reproductive health services for women and girls. That is not true. You have to talk to many women of different backgrounds and closely monitor what goes on in the community to accurately assess the situation, their needs and concerns.”

If the women and girls are approached at this level, information can flow back and forth between the refugees and international organizations providing relief services, which is crucial to achieve the objective of the well-being and security of the refugees, says Ms. Moghaddam.

“Even though measures to protect women and girls are envisioned in the planning and execution of relief projects, that information is rarely available to the women on the ground, including local women’s NGOs. When they don’t know, they don’t ask for protection. Also, if security services are offered, standards must be applied fairly and consistently.”

To ensure that relief services, including reproductive health and counselling, reflect the needs and concerns of women, it is especially important “male leaders of Afghan communities must insist that women, representing a variety of views and backgrounds, are part of the decision-making process at all levels. Without the participation of these women in the design of services, as well as community rehabilitation and peace building, lasting, positive results are very likely to prove elusive”.

UNFPA is the world's largest multilateral source of population assistance. Since it became operational in 1969, it has provided more than $5 billion to developing countries to meet reproductive health needs and support sustainable development efforts.