Leaders around the world commit support for voluntary family planning

APAC, Uganda/LONDON, United Kingdom – Kate Opio, 33, was buoyant, cuddling one of her newborn twins in the maternity ward at a health centre in Uganda’s Apac District. The other twin slept peacefully beside them. But this lovely moment almost didn’t happen, Ms. Opio’s midwife explained. All three nearly died in childbirth.

“Ms. Opio experienced a cervical dystocia, a condition where the cervix stops enlarging, making it difficult for the baby to come out,” Margret Nabukenya said. “We had to make a quick decision to get her to [the operating] theatre for a Caesarean to save the life of mother and babies.”

Ms. Opio wanted to add something, so she summoned her husband, who speaks English, from outside the maternity ward. Samuel Opio arrived with a smile. “We thank God for the midwife, and I want her to help other women the way she has helped my wife,” he said.

Then he shared that the twins – while cherished – were not planned.

“After we had four children, my wife and I thought that was enough. We were using the natural family planning method,” Mr. Opio explained. “We were not prepared to have more babies, but it has happened.”

Though he is overjoyed that the twins arrived in good health, Mr. Opio is now worried about providing for all six of his children.

He and his wife requested a modern contraceptive method to prevent further unplanned pregnancies.

Modern, reliable contraceptives enable couples to choose whether and when to have children. It also helps to preserve the health of women and girls, empowers them to pursue education and work, and boosts the ability of families to save and invest in the health and educations of their children. 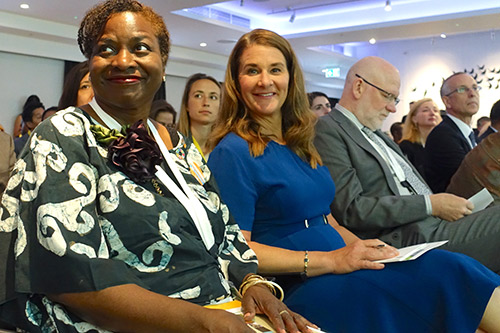 In 2012, at a summit in London, dozens of organizations and countries – including Uganda – agreed to support voluntary family planning, with the aim of reaching 120 million more women around the world.

If this goal were achieved, the world would see approximately 110 million fewer unintended pregnancies, nearly 3 million fewer babies dying in their first year of life, and 200,000 fewer women and girls dying in pregnancy and childbirth.

Progress has been made in the past five years.

“Over the past five years, contraceptive use among married women in Uganda has increased by almost 10 per cent,” said Alain Sibenaler, UNFPA’s Representative in the country.

But there is a long way to go: Thirty-three per cent of Ugandan women and girls who are in a relationship would like to stop or delay childbearing but are not using contraception, according to the 2016 State of World Population Report.

And these needs persist at the global level. An estimated 214 million women and girls in the developing world still have an unmet need for modern contraceptives.

On Tuesday, 11 July, another Family Planning Summit was convened in London to address these needs.

Attendees also reaffirmed the importance of contraceptives at both the international and individual level.

“Family planning is one of the smartest investments that countries can make for their futures,” UNFPA Acting Executive Director Dr. Natalia Kanem emphasized. “Empowering women and adolescent girls to choose whether and when to have children empowers them to make free and informed decisions in all aspects of their life. They can stay in school longer, earn a degree and enter the workforce; ultimately making families, communities and nations thrive.”