NUR-SULTAN, Kazakhstan – “When they first noticed I was pregnant, I said to my family that I would have an abortion, just like they wanted me to,” said Nadya*, 20. “Instead, I decided to keep the baby [...] Having a baby in a village for a woman without a husband is unthinkable."

When Nadya was 17, she met a man in his early 20s. A few months after they started dating, Nadya's mother died. Her boyfriend was helpful during that difficult time, she said, and she later provided for him when he didn't have a stable income.

But then everything changed. "As soon as he found out that I was pregnant, he left and married another girl,” Nadya said.

Her story is all too common in Kazakhstan.

Comprehensive sexuality education is currently not offered in Kazakhstan’s schools, although UNFPA is working to integrate components of this education into various school subjects. Nadya believes she could have avoided her unintended pregnancy if she had received such lessons.

"When I was a teenager, in my class a lot of students had already had sex. Quite a few faced problems of unprotected sexual relations," she explained. "Now I understand that teenagers just don't know any better. They may be making mistakes that they will regret later."

Contrary to popular beliefs in the country, timely and age-appropriate comprehensive sexuality education does not result in teenagers having sex earlier. In fact, test runs of sex education courses developed by UNFPA in Kazakhstan have shown that enrollees tend to postpone sexual debut. These students are equipped with better knowledge about sexually transmitted diseases, able to resist pressure to engage in unwanted sex, and empowered to cultivate positive behaviours  such as maintaining respecful relationships and negotiating safe sex.

“When a young girl has an unplanned pregnancy or a young guy contracts a sexually transmitted disease, it means that adults have failed these teenagers. They are basically children who, if they could, would have loved to turn to adults for advice and help,” said Dina Teltayeva from UNFPA’s office in Kazakhstan.

According to another UNFPA survey, 32 per cent of adolescents, aged 15 to 19, in Kazakhstan want to know more about contraception to avoid an unintended pregnancy.

“Why do we study geometry, algebra and loads of other lessons and not psychology and family planning? These could have given us more information that is more useful for real life,” said one of the surveyed adolescents.

Nadya thinks that parents should talk to their children about sexuality, and that children should learn about their bodies in class. "Besides, boys and girls should share the responsibility for the consequences of unprotected sex, such as an unintended pregnancy,” she said. “Currently, girls are paying a higher price.”

Nadya is a new resident of a Dom Mamy (“Mother’s Home”) in Nur-Sultan, which supports women who have been rejected by their families due to pregnancy. UNFPA partners with the Dom Mamy network, which has 25 facilities throughout Kazakhstan.

The facilities offer housing, meals and medical services to new mothers for up to six months. They can also access psychosocial and legal aid, as well as vocational training.

Nadya hopes to get back on her feet soon; a project coordinator has helped her get a job at a construction firm.

Despite the difficulties she has experienced, Nadya is glad she was able to choose to keep her child. “I am very happy I have a daughter now, [that] I have someone to go to, smell my little baby and feed her. I don’t have any regrets that I’ve chosen to give birth," she said. 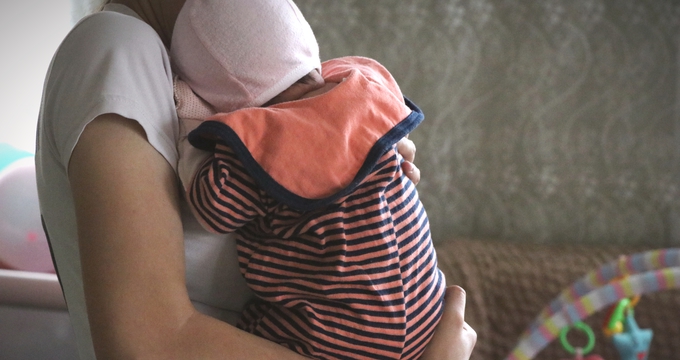