DUHOK, Iraq – The town of Duhok, in northern Iraq, is filled with survivors of conflict. More than 46,000 people are scattered across three displacement camps, and thousands more are living outside the camps, according to the UN Refugee Agency. All of them have endured terrible losses – and many have also endured horrific abuses.

The threat of gender-based violence escalates in all humanitarian emergencies, but the brutality and sexual violence documented in the conflict with the Islamic State of Iraq and the Levant (ISIL, also known as ISIS or Daesh) have shocked the international community.

Nagham Nawzat, a 38-year-old Iraqi gynaecologist, knows all too well what these survivors have undergone. And she has committed her life to helping them. 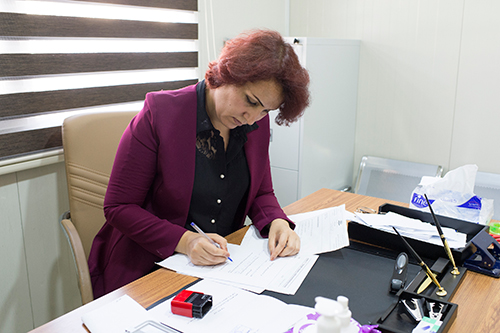 Dr. Nawzat works in her office at the survivors' centre. © UNFPA Iraq/Turchenkova

Dr. Nawzat is herself a displaced person. In 2014, she was forced to flee her home near the northern city of Sinjar as ISIL forces closed in. Her own experience was harrowing, but she quickly learned that many women and girls fared much worse.

Physical abuse, sexual violence and even slavery have been reported, particularly among members of the Yazidi minority.

Dr. Nawzat devoted herself to helping these women and girls, motivated “not only because it’s my duty as a doctor, but I also witnessed what the survivors go through while I was displaced from my town after ISIS took over Sinjar,” she explained.

“At the beginning, I used to visit the internally displaced persons’ camps to support survivors there.” But it was not easy. “It was a challenge to continue, and I could not obtain financial assistance at the beginning,” she said.

Last year, UNFPA and the Directorate General of Health established the Duhok Survivors’ Centre to meet the needs of women and girls fleeing ISIL. Dr. Nawzat and a number of other volunteers moved to the centre to provide care.

“Our interventions became more sustainable and accessible to women and girls in the camps,” Dr. Nawzat said. 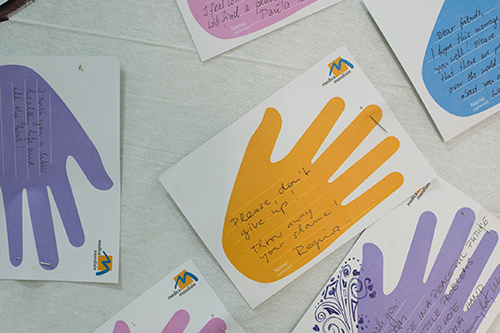 A "quotes wall" at the UNFPA-supported survivors' center in Dohuk shows messages of strength and support from psychosocial sessions. © UNFPA Iraq/Turchenkova

The centre provides specialized care to survivors of all forms of gender-based violence, including sexual abuse, exploitation and domestic violence. It is the only such specialized facility in Iraq.

Survivors receive medical treatment, counselling, as well as legal services and referrals to additional support. Staff at the centre provide culturally sensitive care that upholds the dignity of survivors and promotes long-term recovery.

Since its opening, the centre has handled over 850 cases of gender-based violence, ranging from women who have escaped slavery to cases of domestic abuse, and including both Iraqi women and Syrian refugees.

In March, Dr. Nawzat was one of 14 women to receive the International Women of Courage Award, presented by United States Secretary of State John Kerry.

“This award gave me the power to continue my mission, to support the survivors and revive their hopes in having a better life,” she said.

But more than that, she is inspired by the bravery and strength of the women she serves. “They make me more enthusiastic to go on,” she said.