PORT-AU-PRINCE --- The Champs de Mars in downtown Port-au-Prince used to be a stately plaza and a worthy setting for Haiti’s Presidential Palace. After the 12 January earthquake, the square has become a temporary camp for people who have lost their homes. Instead of the backdrop of the majestic, neo-Romantic building, the square is now dominated by a mosaic of makeshift tents and the crumbled remains of government buildings.

Lafleur Clermite and her husband, Wilkison Meda, along with their four children, sought refuge among the crowds on the plaza after their house was destroyed in the disaster. Lafleur was nearly nine months pregnant with her fifth child when the powerful quake devastated Haiti’s capital.

A week later, on Monday night, she and her husband made their way on foot to the city’s University Hospital, L’Hopital General, as she sensed that the birth of their baby boy was approaching quickly.

Hospitals short on staff and supplies

They found a maternity ward with few patients and equally few staff members. “They [staff] all live near here, and they are 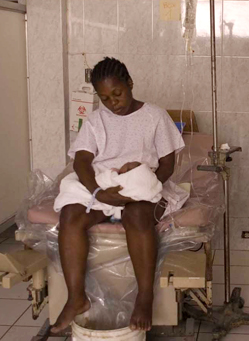 Lafleur Cleremit, who lost her house in the earthquake, delivered her baby, Makenson, at the Hopital General on Tuesday. Photo: Carina Wint/UNFPA

all on the street, so they are not motivated to work in the hospital,” explains Marlene Dejean Gaudert, Chief Nurse at the Hopital General’s maternity ward. Diegue Chimene, a nurse, said she sleeps in the street, but had been coming to the hospital every day--though today was the first day she had been able to go back to work.

At 12:15 p.m. on Tuesday, Lafleur gave birth to a baby boy, Makenson. Francois Clauden Maxcene, a volunteer obstetrician from a private clinic across the street helped deliver the baby, using safe delivery supplies from UNFPA, the United Nations Population Fund.

Medical supplies are still a scarce commodity in Port-au-Prince, though United Nations agencies and international non-governmental organizations are now shipping in significant amounts of supplies, both by air and by road from the Dominican Republic.

“The safe delivery equipment can be life-saving, especially under conditions like these,” said Agnes Jacobs, an international midwife adviser working for UNFPA.

Dr. Maxcene also pointed out that medical supplies are not the only things missing. There is no functioning system in place for registering new births. “We didn’t even have a pen,” he said.

Wilkinson, the baby’s father, seemed overwhelmed with the prospect of feeding a family of seven, especially under these circumstances. “I buy sweets and other things to eat and sell them on the street,” he explains. “I do everything I can to survive.”

Lafleur says that she is feeling a lot of emotions and worries. “We don’t know where to go or how to feed the baby.” 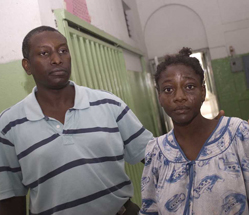 Rose Mirlande Veillard came to the Hopital General fearing that her baby would be stillborn due to the shock of the earthquake. Photo: Carina Wint/UNFPA

Rose Mirlande Veilard, a pregnant 22-year-old woman who also lives with her family on the street near the Champs de Mars, arrived at the Hopital General just as baby Makenson was born. Rose had stopped feeling her baby kicking, and was worried that the scare of the earthquake and her struggle to get out of the house as it came tumbling down had killed her baby.

Every night since the disaster, she has slept in a car parked near the St. Michel Church along with other family members. Her face torn with worry over the fate of her unborn child, and her body bearing witness to the narrow escape from her family’s crumbling home, she waited anxiously to see the doctor.

The verdict this time was encouraging; the baby was still alive, and Rose was asked to come back the next day for a more thorough examination.

“These children who are born today will have to struggle to make this a better country. I just hope that they don’t end up on the street,” said Maxcene.