HIV/AIDS a Time Bomb for Refugees and the Internally Displaced

UNITED NATIONS, New York - HIV/AIDS is a growing problem in camps for refugees and the internally displaced, especially in West Africa, according to a group of experts gathered in New York for a two-day conference organized by the United Nations Population Fund (UNFPA). The situation is on the verge of exploding, as the poverty, powerlessness, insecurity and social instability that refugees and internally displaced persons experience, fuel the spread of HIV infection.

"West Africa is standing on a time bomb when it comes to HIV/AIDS," warned Mustapha Bello Adeoye, a technical adviser for the Reproductive Health Consortium in Sierra Leone. "This silent epidemic does not wait," he continued. 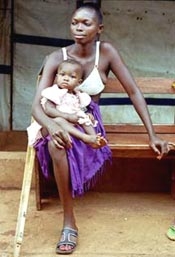 Mariana Kallon and her daughter in the camp for amputees and wounded civilians in Freetown, Sierra Leone. After she was shot in the foot by a rebel soldier, her leg had to be amputated.  Photo: © Teun Voeten 2002

Women and children uprooted from their families and protective mechanisms are extremely vulnerable to sexual violence during and after conflict, including the use of rape as a tool of war. As they move from place to place, refugee and internally displaced women and children are unable to rebuild their protective mechanisms and continue to face this violence, facilitating the spread of HIV.

Additionally, social norms regarding community, family life and sexual relations are often disrupted by conflict, making many refugees vulnerable to sexual exploitation and HIV infection. Facing extreme poverty and not enough food, many refugees often find themselves in a situation that forces them to barter sexual services in exchange for food and other necessities in order to survive.

When you have nothing, "you have your body to sell, or your daughter's body to sell," said Tamar Renaud of UNICEF, who works with children affected by armed conflict.

The hopelessness of the refugee setting also leads adolescents to take sexual risks, such as having sexual relations at an early age. "They know about HIV, but because of their situation, they compromise their future in order to live today," Mr. Adeoye said.

Peacekeeping forces, soldiers and other military or police forces also contribute to the spread of the epidemic. "Far away from their families and sexual partners, they engage in sex on a transactional basis with local women," Renaud said. "Because these troops move from place to place, the chance of spreading HIV is very high."

Although a consensus on the need to address the issue HIV/AIDS in refugee and internally displaced camps is growing within the humanitarian community, there are many factors that inhibit a proper response to the crisis. As Renaud explains, "schools are broken down, communication mechanisms are broken down, the health system is broken down, doctors and teachers have fled, there are high illiteracy rates because of the conflict. But ultimately, the humanitarian system is the way to go."

After addressing urgent needs such as testing blood before transfusion, treating sexually transmitted infections, distributing condoms and providing basic information, humanitarian action needs to be broadened in scope to address the risk factors that lead to high infection rates. "Giving information to refugees is not enough," adds Adeoye, "we need to widen the frame of our intervention to address the risks factors."

If these factors are not addressed immediately with a comprehensive effort, Deji Popoola, UNFPA Representative to Liberia, warns that more generations of young and old in Africa will be lost:

"We can not restart meaningful development during conflict; it is the primary impediment in the fight against AIDS. Even when peace comes, the scars left by conflict continue to impede progress: When infrastructure, hospitals and clinics are destroyed, communities suffer until they are rebuilt. Tragically, we are losing the generations that could rebuild them."