CHOUCHA CAMP, Tunisia — As widespread unrest shook Libya in early March 2011, around 1,000 people per hour were crossing the border into Tunisia. Tents quickly sprung in the desert as refugee camps formed near small towns. While international organizations deployed staff and supplies to respond to the crisis, many Tunisians also rushed to the border to offer their skills to help refugees.

With over 30 years of experience as a midwife, 54-year-old, Bochra Ben Teib found herself, for the first time, drawn to humanitarian work when she discovered an alarming situation a few miles from her hometown in Ben Guerdane, in Southern Tunisia. “My husband and I came to bring blankets and food to the first refugees who had fled Libya,” she recalls. “I noticed that there were many pregnant women among all the people. I immediately wanted to help them.”

On August 19th, the United Nations is celebrating World Humanitarian Day in recognition of aid workers who help millions of people around the world. Bochra’s dedication -- representative of the spirit of humanitarian workers everywhere -- is inspiring.

Caring for expecting mothers in emergencies 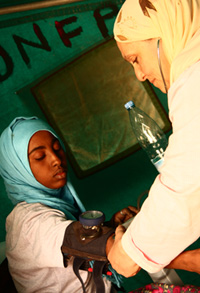 UNFPA works with partners to ensure that the specific needs of women are factored into the planning of all humanitarian assistance, by addressing reproductive health needs that are sometimes forgotten in the rush to provide food, shelter, water and other essentials.

At the onset of the refugee crisis in Tunisia, UNFPA sent emergency supplies and equipment to make childbirth safer and supported the deployment of midwives. Bochra who works at Ben Guarden’s reproductive health centre, was sent, in coordination with UNFPA, to work in Choucha refugee camp.

Gaining the trust of communities

As soon as she arrived in the camp, Bochra began visiting different tents with other UNFPA staff to distribute dignity kits, which consist of items to meet women’s hygiene needs such as underwear, soap and sanitary pads. These first visits allowed Bochra to have an initial contact with women in the camp, and gave her an opportunity to identify urgent cases. “During these first visits, I was able to identify at least 40 cases that needed an immediate medical or psychosocial intervention,” she says. “For more urgent cases, we accompany the patient to one of the two temporary hospital set up in the camp.”

Many of the women who needed immediate care were third-country nationals from Somalia and Eritrea who had been twice uprooted by war. Gaining the trust of this vulnerable population has been a challenge. Bochra had to explain to these women that midwives are there to ensure their health, before, during and after delivery. “Progressively, women started to trust us. Now they spontaneously come to us to get examined,” she says. “A young pregnant woman who had just arrived in the camp was immediately referred to us by women in the community. She was suffering from anaemia and could have lost her baby.”

Today, 70 per cent of the Libyans who crossed into Tunisia have returned to Libya as parts of the country have become more stable. Some third-country nationals were repatriated to their countries of origin while others have been granted asylum in other countries.

However, 3,000 refugees remain in Choucha camp as they await relocation or asylum. Bochra and other midwives in the camp are still assisting women. “They now come to us for gynaecological examinations or even to ask for advice about contraceptive methods or family planning,” explains Bochra. The United Nations expects that it will still take some time for refugees to be relocated. In the meantime, these affected communities will continue rely on the efforts of Bochra and other humanitarian workers to ensure their wellbeing.