To cover these gaps, UNFPA is supporting reproductive health camps, which bring life-saving health services to areas still reeling from the 25 April disaster.

"I and my baby might have died had there not been the camp in our village," said Shreejana BK, 16, who delivered her baby at a UNFPA-supported reproductive health camp in Rasuwa District.

Nearly 85 per cent of health facilities in Rasuwa District were damaged in the earthquake, including the health centre in Shreejana's village, Goljung. Her home was also destroyed in the disaster. 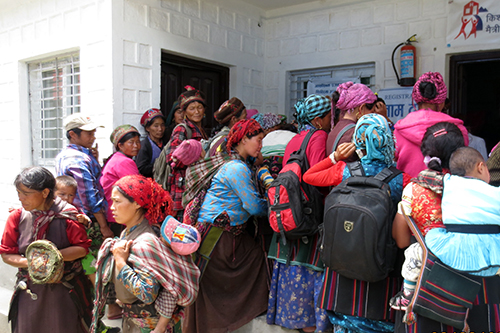 Shreejana, who was married at age 14, was pregnant and nearing her due date. Yet visiting the nearest health post was next to impossible.

She also found herself grappling with concerns about her health. As an adolescent, she faced heightened risks: complications of pregnancy and childbirth are the second leading cause of death among adolescent girls in developing countries.

“After the earthquake, the fear of losing my life and baby constantly haunted me, as I had already realized that I am just 16 and my body is not fully mature," she told UNFPA.

"I was almost nine months pregnant and started sweating profusely [thinking] about where I would go for my delivery."

Bringing life-saving care to those in need

Fortunately for Shreejana, UNFPA, together with the Manmohan Memorial Community Hospital, government health officials and the Adventist Development and Relief Agency, organized a reproductive health camp in her village on June 23 and 24.

It was one of more than 80 such camps that have been organized in remote areas since the earthquake struck. The camps bring doctors, nurses and midwives to provide health services, including antenatal care, safe delivery services and post-partum check-ups. The camps also supply reproductive health information and care for the wider community, including adolescents.

In addition to providing support through the camps, UNPFA provides local health facilities with supplies, such as reproductive health kits, to help them resume basic services.

"The camps held in our district, with the support of UNFPA and other partners, have helped save lives of mothers and their newborns," said district health officer Krishna Bahadur Mijar. So far, seven camps have been held in Rasuwa, with five more planned. 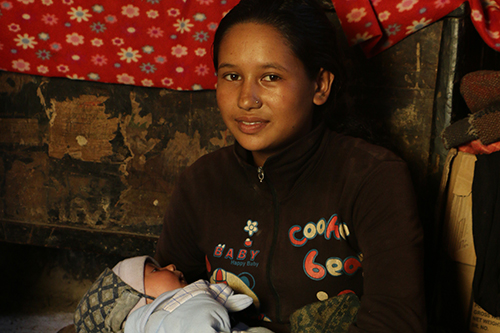 Shreejana and her baby inside their temporary shelter. © UNFPA Nepal/Santosh Chhetri

The reproductive health camp could not have arrived at a better time for Shreejana. Her husband was working far away in the capital, Kathmandu, and her mother, Hiramaya, feared they would not be able to find help in time for delivery.

"After we knew about the camp, we felt a bit more relaxed," Hiramaya said.

Shreejana went to the camp on the first day it opened. "A female community health volunteer took me there. After a check-up and tests, I returned home. The next day, I went into intense labour and was rushed off to the camp. Soon afterwards my baby was born safely there."

She was one of about 300 people, most of them women and girls, to receive reproductive health information and care.

Today, Shreejana says she wants to spare other girls the experience of early pregnancy. She has promised herself that she will become an advocate when her baby grows up.

"I married at an early age… and became an adolescent mother out of ignorance,” she said, holding her infant in her lap. “But now I realized that the consequences can be costly. I will reach out to other girls in my village so that we can prevent child marriages and adolescent pregnancy."