VIENTIANE, Lao People's Democratic Republic – “If only my wife and I knew early enough about family planning and could access services, we would have had four children – not 14, as we did,” said Bounthone Kongphongma, 56, in the remote village of Lao Luang. Six of those children died, and the other eight suffered “because life was so hard,” he said.

But in the Lao People's Democratic Republic, the unmet need for family planning is high. Up to 20 per cent of women who want to stop or delay childbearing are not using any method of contraception. 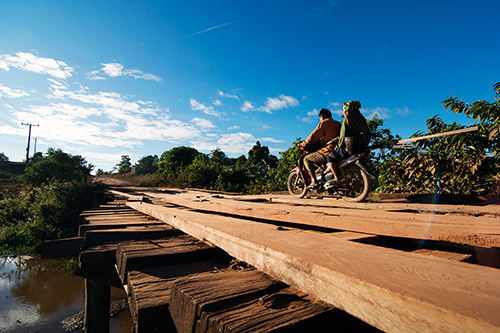 People travel by bicycle over a river crossing in the impoverished rural province of Savannakhet. © UNFPA/Micka Perier

Mr. Kongphongma, a retired military nurse, is trying to change this. He volunteers as a community health worker, providing family planning counselling and information to villages in the impoverished province of Savannakhet.

He hopes these services will improve life for the next generation – including his own children. “I also gave my daughters information and counselling,” he said. “As a result, my three daughters have only four children each, spaced.”

When family planning was introduced to the country, in the late 1980s, it was only available in the capital, Vientiane. Most people were not aware such services even existed.

“At first we focused only on married couples to provide them with contraceptives to space pregnancies,” said Kopkeo Souphantong, deputy director of the health ministry's mother and child health department. “But we realized that there was also a need among young people. Since 1995, services have been available for all couples and individuals.”

Today, most district health centres, with the support of UNFPA and other partners, are able to provide family planning services.  Better access to modern contraceptives, combined with improved maternal health services, has helped dramatically reduce maternal mortality. In 2000, 650 women died in pregnancy or childbirth for every 100,000 live births; in 2012, this number was 357.

But for isolated, rural villages like Mr. Kongphongma’s, these services are still hard to come by. 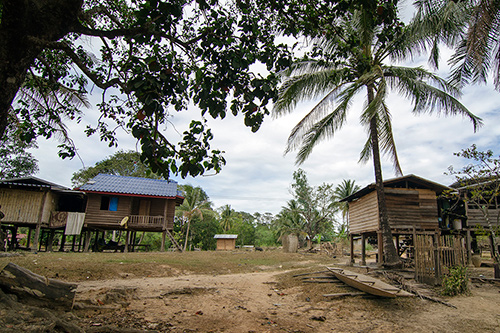 To meet the needs of rural populations, UNFPA supports the training of community volunteers who provide family planning counselling and distribute contraceptives. These volunteers also refer clients to health centres for additional contraceptive methods and information.

All contraceptives are dispensed free of charge; UNFPA is the leading provider of contraceptives in the country, mainly through its Global Programme to Enhance Reproductive Health Commodity Security.

Mr. Kongphongma is one of eight volunteers covering 72 villages – about 40,000 people – in Savannakhet. He spends five days a week, travelling to remote areas on his motorbike, advising people of their options.

Tongdam and Laipong Kongwan, 27 and 25, already have three children, and are relieved to be using family planning after receiving counselling from Mr. Kongphongma. “When my wife told me she wanted to stop having children, I accepted,” said Mr. Kongwan, a farmer. “It is better that way. We are poor, and I cannot feed too big a family.”

He added, “Both my wife and I come from big families. It was very difficult. There was not enough rice for all of us. Not having more than three children will allow us to raise them in better conditions, to feed them well and send them to school. This is very important. Neither my wife nor I got a chance to study because our families were too poor.” 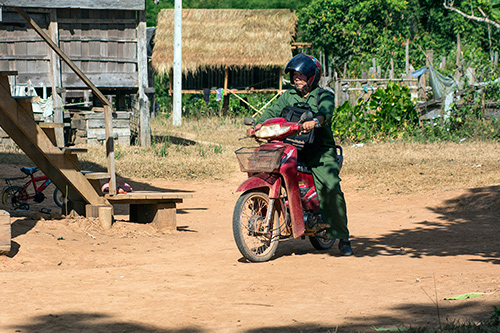 These efforts are working. According to national data, about 60 per cent of women in Savannakhet now have access to modern contraception, and can choose among several contraception methods.

Still, the government struggles to find female volunteers. Of the 74 community volunteers working in four provinces, only one is a woman.

“Men are still dominant in the society, and for many of them, women should stay at home,” said Ms. Souphantong.

UNFPA and partners are also working to train of midwives, who can provide family planning counselling in addition to antenatal and maternal health services. Since 2008, UNFPA has supported the training of more than 1,500 midwives, many of them women.

Change is taking place, said Mr. Kongphongma. “We used to see women having one child at the beginning of the year and another one at the end, but it is not the case anymore. More and more women have one child every two or five years,” he observed.

“More and more people realize that family planning is a way out of poverty.”