UNITED NATIONS, New York – In conflicts the world over, women’s bodies become battlegrounds and rape becomes a weapon of war. This week, government ministers and representatives from the United Nations and other organizations are joining legal, military and judicial experts to generate momentum towards ending the use of rape and sexual violence in conflict.

The Global Summit to End Sexual Violence in Conflict opened today in London. The four-day summit is being co-chaired by UK Foreign Secretary William Hague and Angelina Jolie, Special Envoy for the UN High Commissioner for Refugees. It is the largest gathering ever brought together on the subject.

Globally, 35 per cent of women have experienced either intimate partner or non-partner sexual violence. It is the most pervasive, yet least reported, human rights abuse worldwide.

“Gender-based violence does not discriminate according to nationality, ethnicity, education or class,” says Dr. Babatunde Osotimehin, Executive Director of UNFPA. “It happens everywhere. But we know too well that in conflict situations its occurrence increases because of insecurity.” 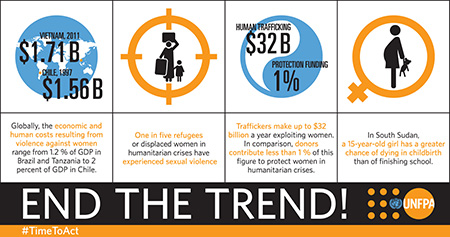 Attendees at the summit are calling for global leaders and policymakers to "end the trend". (Click to enlarge.)

Ahead of the summit, UNFPA warned that without immediate action, at least 20,000 women and girls – or two women every hour – will suffer sexual violence in the DRC this year alone.

According to data compiled by the Congolese Government, with technical and financial support from UNFPA, 18,795 cases of gender-based violence were reported in the DRC in 2012.

But the scale of the problem is likely much larger, according to Dr. Osotimehin.

“Even in normal situations, sexual violence often goes unreported,” he said. “In a conflict like in Eastern Congo, we know that cases are often not reported because of fear of retribution or shame.”

From the Democratic Republic of the Congo to Syria, from Bosnia and Herzegovina to South Sudan, UNFPA works with partners to respond to gender-based violence, early marriage, trafficking and other forms of sexual violence in conflict situations.

In response to the conflict in Syria, for example, UNFPA-supported safe spaces assist more than 2,000 refugee women and girls every week. These spaces offer gender-based violence case management, psychosocial support, educational initiatives and other activities.

In 2012, UNFPA worked with partners in 87 countries to help design, plan and implement programmes to address gender-based violence in all its forms.

Discussions at the summit are focused on addressing the needs of survivors of sexual violence in conflict. Attendees are also urging countries to strengthen laws against sexual violence and to create mechanisms enabling the prosecution of these crimes even when they occur conflict situations. Attendees are also stressing the need for measures to reduce the dangers to women in conflict zones.

UNFPA is also calling on for increased funding for programmes to prevent and address all forms of gender-based violence, including human trafficking and sexual exploitation.

Women’s and girls’ vulnerability to exploitation increases during crises. Between 700,000 and 2 million women and girls are trafficked across borders each year, generating as much as $32 billion in annual profits for traffickers. By comparison, donors contribute only 1 per cent of the same figure to the protection, human rights and rule of law sector in humanitarian crises.

Gender-based violence does not only exact an unconscionable toll on human lives; it also has far-reaching economic consequences. According to the World Bank, the lost productivity resulting from domestic violence ranges from 1.2 to 2 per cent of gross domestic product figures globally. In the UK, for example, total costs linked to domestic violence were evaluated at 10 per cent of GDP.

The summit is also the site of the launch of “Sound of Silence”, a book of photographs depicting the lives of survivors of conflict-related sexual violence in Bosnia and Herzegovina. The book is a part of the “SoS - Sound of Silence” campaign launched by UNFPA in 2010.

“For sustained change, gender equality must be upheld, the status of women and girls elevated, violence rendered socially unacceptable, and thus, the cycle of violence can be broken,” says Dr. Osotimehin.