ISTANBUL, Türkiye – “When we go to schools and shopping centres, we have to go to the bathroom in groups of three, so that gang members cannot abuse us. They can choose us to be their wives, and if we refuse, we could be killed, and our parents and family members could be killed as well,” says Victoria, a 20-year-old human rights activist from El Salvador – where escalating violence among gangs has reached the level of the armed conflicts that wracked the country in the 1980s.

“But what we want is to be free, free to go to school, free to walk and play without fear in the streets,” she adds. “We want to feel we truly have a future, and we want to be those who change that future.”

Globally, 50 per cent of the 1.4 billion people living in countries impacted by crises and fragility are under the age of 20. And many of these young people are among the first to step up to help their communities rebuild. However, too often, their unique needs are not specifically addressed in humanitarian responses, and their energy, leadership, knowledge and creativity is not tapped into to maximize the efforts’ impact.

But last week, during the World Humanitarian Summit in Istanbul, global government, civil society and private sector leaders, including UNFPA, signed the first-ever compact committing to not only specifically fund, research and address youth’s needs in crisis settings, but also, as Victoria demanded, to ensure they are part of designing and leading those responses. 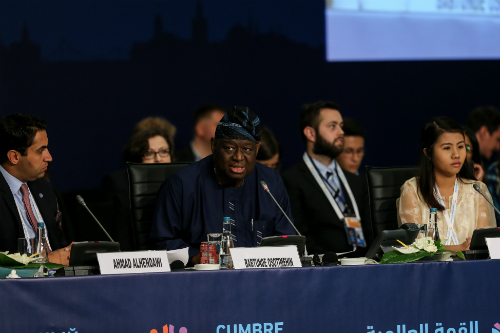 Due to widespread conflicts, persecution and natural disasters intensified by climate change, the world is currently facing levels of displacement and a need for humanitarian aid unseen since the Second World War. In these settings, as familial and social ties erode amidst the chaos, young people are left exposed to danger, often without any systems or adults available to help and protect them.

Young women are particularly at risk. In fact, during humanitarian crises, being young and female is one of the greatest risk factors for violence and death. In these settings, the chances that an adolescent girl will be forced into early marriage, trafficked, or subjected to sexual- and gender-based violence drastically increase. And around the world, adolescent girls have the highest risk of dying during pregnancy and childbirth – a risk that skyrockets in emergency settings.

Adequately responding to crises requires understanding and addressing the needs of young women and men.

“We can no longer afford to leave young people behind,” said UNFPA Executive Director, Dr. Babatunde Osotimehin, during his remarks before the signing of the compact. “It is time to make the humanitarian system work for young people by engaging them, addressing the risk factors they face and maximizing their ability to help rebuild and re-energize their communities and countries.”

Signing onto a better future

The compact outlines five key actions to ensure young people are no longer an afterthought in emergencies: One, increase services for youth. Two, include youth in all phases of humanitarian responses, from planning to disseminating information. Three, empower youth-led organizations. Four, ensure the resources needed to achieve goals one through three are available. And finally, five, generate the data critical to better understanding how humanitarian crises impact young people. 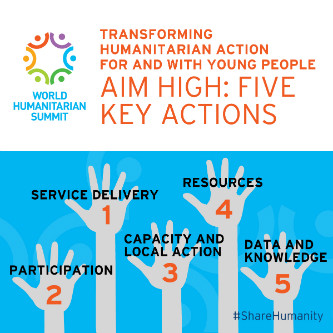 And the call to better support the world’s youth was not limited to the compact. Throughout the two-day summit, which drew 9,000 participants from 173 countries, numerous events focused on better engaging and protecting then.

In addition, 12 countries signed a joint statement committing to scaling-up investments in sexual and reproductive health in an effort to end all preventable maternal deaths in crises – a critical part of caring for adolescent girls. Now the attendees must translate these historic commitments into on-the-ground change.

But around the world, youth are already hard at work responding to their communities’ needs during and after crises – including, re-building their hope and resilience.

Chloe Reynaldo, a 16-year-old from the Philippines, became a peer educator in the aftermath of 2013’s Typhoon Haiyan, the deadliest storm to hit the country since 1881. “I was able to be at the forefront of [the response] in my community,” she says. “I engaged young people in discussions about risky sexual behaviour, and, young as I am, I learned that I could be a positive actor and an agent of change in humanitarian settings.”