Meheba, in northwest Zambia, is home to more than 50,000 refugees – mainly from Angola and the Democratic Republic of the Congo, with smaller numbers coming from Rwanda, Burundi and other countries in the region. YMCA, with support from UNFPA, has been providing reproductive health services in one of sub-Saharan Africa’s largest refugee settlements since 1999. 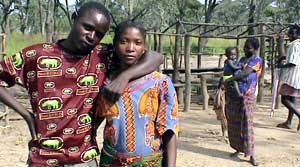 One of the project’s many components is the provision of reproductive health information and counselling to newly arrived refugees. UNFPA recently spoke with Joe Makano, Director of Programmes and Development for YMCA Zambia, Ngoza Masiwa, the Project Coordinator, and Godfrida Changala, the Project Assistant, about some of the special issues faced by refugee women.

" Many women are sexually abused all the way here. "

What is the most common reproductive health problem facing new arrivals to the settlement?

Godfrida: Yes. Many women are sexually abused all the way here. At the beginning it’s with soldiers in their countries as they try to run away. On the way, they’re often forced to trade sexual favors for food or protection for themselves and their children. And this is on top of traumas they’ve been through already. Many saw their family members killed right in front of them.

Ngoza: And in some cases, they even continue to be abused after they arrive.

Godfrida: Yes, rape is fairly common among new arrivals. They don’t usually report it and people keep quiet about it.

Ngoza: But when we start educating these people, in a group, and tell them that it’s wrong, and that they can get an STI [sexually transmitted infection] or even HIV, they’ll come up to us individually and say that this has been happening to them, that they’ve been subjected to sexual abuse. And they ask for help. They begin to understand. They take steps to try to keep it from happening again.

What are some of the special issues affecting newly arrived refugees in terms of family planning?

Ngoza: And they talk about replacing those who died. So they have lots and lots of children, even though they can’t always provide for them and despite the effect it has on their health.

Godfrida: And on the health of the rest of the family.

Ngoza: That’s right. Sometimes they have eight babies in ten years. And only four of those live and the rest are malnourished. No one in her right mind would want to get pregnant every year for ten years.

What do you tell these women and their partners? From an emotional point of view, at least, it’s understandable that these women might think of having lots of children as a way to replace the families they’ve lost.

Ngoza: These women need counseling. That’s where the counseling comes in.

Ngoza: Yes. “At least space the births,” we tell them. And after they receive counseling, they usually ask us how they can do that.

How high is the level of HIV awareness among newly arrived refugees?

Godfrida: They are definitely less aware than the general population, particularly the ones coming from very rural areas or places that have been in conflict for a long time. Some of them haven’t even heard that you can get HIV by sleeping with someone. There’s a lot of ignorance.

Ngoza: Some of them have never seen a condom. We spend a lot of time on this, not only educating them about the risks of infection, but showing them how to use a condom, how to put one on. Some of the women really don’t know how. We show them, and we explain the dual protection that a condom provides – against HIV and unwanted pregnancy.

What are some of the issues that tend to affect adolescent refugees in particular, besides abuse?

Joe: Loneliness and homesickness. And just general uncertainty about the future.

Ngoza: And that often makes them more prone to risky behavior, to having sex with people they don’t know very well, and usually without any protection.

Godfrida: Yes, they’re looking for something to occupy themselves. Or just affection, for someone to touch them after they’ve been walking for such a long time to get here, to get close to someone. They’ve been through so much. These kids have seen so much, have been separated from people they love or even seen them murdered. Some of them arrive here with no one. So naturally they reach out to other young people in similar circumstances.

Joe: That’s a big part of it. But I think one of the biggest issues, even among refugees who have been living here for a while, is the lack of recreation. Having more activities would make a big difference in the lives of these kids. I mean, they have been traveling for the last year or six months, escaping from the hell of war to this promised land called Zambia. And then they get here. And then what?

Ngoza: And some of them, many of them, are coming from big cities, with a lot of things going on, but because of war they had to leave everything there. And they had social lives there. They would see movies, they would go to discos … and then all of a sudden they are dumped in a place like this, where there is practically nothing to do.

Joe: We need to find more regular activities for these kids, not only to keep them out of trouble but to replace part of what’s been lost to them.

Ngoza: You see what a difference this could make on Refugee Day, for example, when we have games and sketches and prizes, and people even perform dances and demonstrate other things from home, from their cultures. The young people come to life, they spend weeks preparing for it.

Joe: And it would take very little to give them days like that all year round, to give them something to look forward to, something to occupy themselves with besides sex. Some of the kids here have already formed soccer teams, for example – they’ve even beat Division II teams outside the camps – but they don’t even have enough soccer balls. There’s no equipment. So a group of them, with boys and girls from each zone, are working on a proposal right now for funding to get a league going.

Godfrida: Two leagues! For girls as well as boys. And that way, you can get everyone involved – clearing land for the fields, cutting wood for the goalposts …

Ngoza: Even teaching some of them to sew, to make the jerseys, and so on. So they learn a skill. And eventually to raise funds themselves to keep it going, so it becomes sustainable after the first couple of years.

Godfrida: It really would make such an enormous difference in their lives. It would build their self-esteem, they’d learn skills … but most of all, they’d just have something positive to focus on.

Joe: These kids’ lives are like a jigsaw puzzle. You pull out one piece and you have to replace it with another.