AYACUCHO, Peru – In Vilcashuamán, a Peruvian town perched thousands of metres high in the Andes, there is a surprise waiting at the health centre: A notice for expectant mothers declares, “You decide your birthing position.”

But today, attitudes are changing. With UNFPA’s support, the health ministry and a women’s advocacy group have devised a way to make childbirth both safe and culturally sensitive. 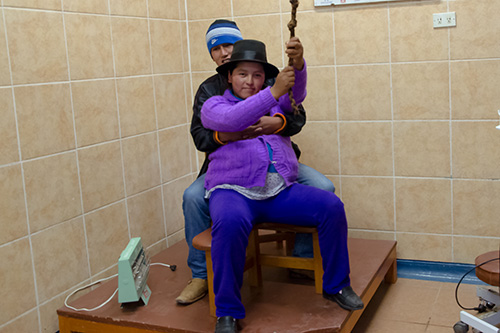 A young couple demonstrate the new equipment available to support vertical deliveries at a clinic in Vilcashuamán. © Panorama/Carlos Gomez

“I was not taught this technique at school,” said Dr. Marlene Saira, an obstetrician at the Vilcashuamán health centre. “It was a shock when the protocol for culturally appropriate births came out, but I gradually began to understand and undergo training.”

She has since assisted in more than 700 upright deliveries.

Indigenous women had long found their treatment by the health system to be unwelcoming and undignified.

“When a woman went into labour, she was told to take off her clothes. But for an indigenous or rural woman, it is not easy to get undressed in front of strangers,” said Clelia Rivera, leader of the Ayacucho Women’s Federation, in the nearby city of Ayacucho.

“Then the woman was put on a stretcher, with her legs spread so anyone passing by could see everything. To boot, she was scolded in Spanish, a language she spoke poorly or not at all. She was not allowed to walk around [to ease labour pains], and she could not drink her maté beverage.”

Summing up the situation, Ms. Rivera said, “Health personnel do not understand their customs or their philosophy of life.”

But it was difficult to convince health officials to reconsider their procedures. The injuries and deaths of indigenous women who delivered at home seemed unconnected to the health centres’ protocols. 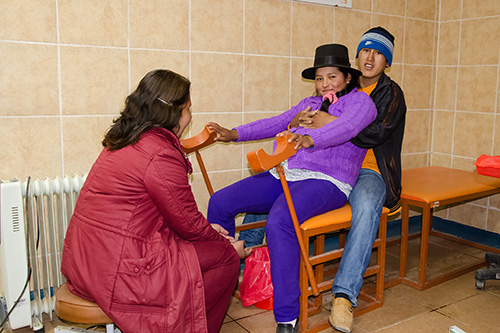 So the Ayacucho Women’s Federation set out to make the connection clear.

“We continuously monitored the women’s health. We followed up on deaths in childbirth, and we documented everything, so we were able to provide proof when we presented our case,” Ms. Rivera said.

The group then approached UNFPA for assistance. UNFPA convened a dialogue with health officials and community leaders, which resulted in a totally new approach to maternal health care.

Health experts agreed to a number of changes that not only ensure indigenous women access to better care, but also assure their comfort, protect their dignity and support their rights.

For instance, health officials agreed that women should be able to decide if they want to receive care in Spanish or the local Quechua language.

Women should also be able to bring a loved one to support them during labour, and they should be able to receive information about their reproductive health and rights.

Now, “some health centres attend 93 per cent of births in an upright position, and there are Quechua-speaking personnel,” said Auacucho regional health director Dr. Ilianov Fernández. “These factors have made it possible to repair the social fabric and regain the trust of women, so that now 90 per cent of births take place in institutions.” 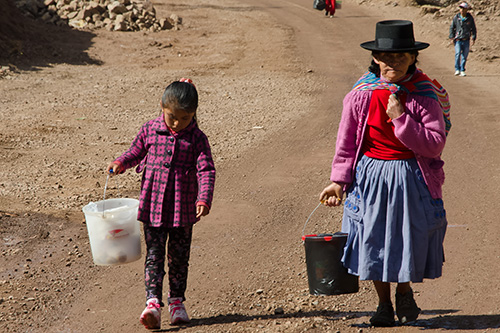 Before, idigenous women often chose to delivery at home, out of the reach of skilled health personnel. © Panorama/Carlos Gomez

Back in Vilcashuamán, midwives seek out pregnant women and convince them to deliver at the health facility. Their wishes will be respected, they explain.

A new maternity room has been equipped for many types of delivery. There is a modified stretcher, a special stool and ropes to hold onto.

When women choose to give birth in the traditional position, it can even have health benefits. “Everything is easier in an upright position. The infant does not suffer. It is faster, safer, less painful and more humane,” Dr. Saira said.

“The mother can be accompanied by others who will help with the birth, like her husband, her mother,” she noted. They can even drink  controlled amounts of maté.

A young couple is staying at a local maternity house – a residence for rural women who live too far from the health facility to make the trip when they are already in labour. Florinda and her husband will be there for a month, receiving meals provided by the health ministry.

“When I had my first child six years ago, they did not ask me about anything,” Florinda said. “Now it is different, and I plan to give birth squatting, just like my grandmother did.”