KHARTOUM/GEZIRA, Sudan – Massive flooding in Sudan – the worst in 30 years – has created an ongoing humanitarian crisis, on top of the country’s existing COVID-19 health crisis.

The flooding has affected 17 of Sudan’s 18 States, prompting the government to declare a three-month state of emergency. As of 1 October, more than 92,000 houses have been damaged and 79,000 destroyed. More than 560 schools and 3,200 health centres have been damaged, and some 30,000 latrines have collapsed, according to recent United Nations reports.

An estimated 206,000 women of reproductive age are living in temporary flood shelters with minimal protection. UNFPA estimates that some 20,000 pregnant women are among the affected. Of them, an estimated 3,000 will experience pregnancy complications, requiring life-saving sexual and reproductive health services. More than 2,000 women will give birth in the coming month.

UNFPA has been responding to the crisis from its earliest moments.

Reproductive health kits were pre-positioned in advance of the flooding. And UNFPA had supported the rehabilitation of 16 emergency obstetric and newborn care facilities in seven states as part of its contingency planning.

“This rapid response has maintained the supplies and services in maternal hospitals and health facilities,” said Fatma Alfaky, a reproductive health officer for the health ministry in Gezira State.

This support can mean the difference between life and death.

“I am eight months pregnant and received a clean delivery bag from the midwife in the mobile clinic,” Maraiam Musa, in Gezira State, told UNFPA. “I lost everything in the floods. Giving birth safely is the one thing that I will not worry about now.”

“The mobile clinics were there in a time when the community needed them,” said Khalil Adam of the Sudan Family Planning Association in North Dafur. “They were a necessity in North Darfur, where there was significant damage due to this unexpected rainy season.”

Today, referral services for women in need of emergency obstetrics services are functioning in 12 states.

“During these situations, this highly rapid and effective response would be key to prevent many long-term health complications, especially for pregnant women,” said Dr. Louay Abdalhafeez, a medical doctor from the CAFA Association.

UNFPA has also supported the distribution of more than 20,000 dignity kits, which contain hygiene supplies including soap and sanitary napkins, as well as information about where to find essential support.

The rising threat of violence against women and girls

In addition to urgent health needs, displaced women face increased risk of gender-based violence and limited services to prevent or respond to such violence.

Though protection needs are rising, services to support survivors of gender-based violence are minimal. In more than 90 per cent of the country’s localities, these services are absent.

UNFPA and partners have activated networks to provide community protection and referrals to services for survivors of violence in North, South and West Dafur, as well as in Blue Nile, Khartoum and Kassala.

Despite efforts, addressing gender-based violence in Sudan remains a challenge. Access to affected populations and areas has been disrupted and the ongoing economic crisis has raised operation costs. 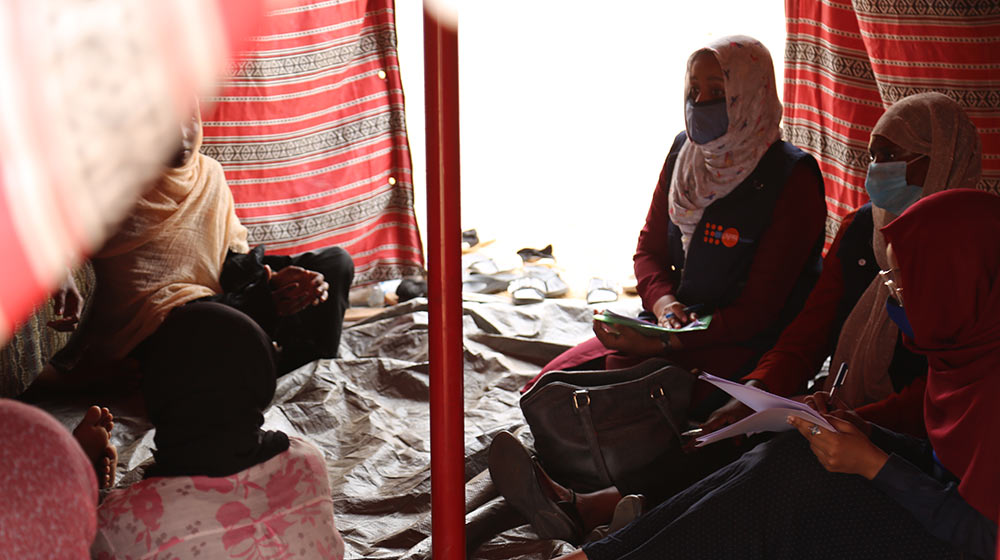