Flight from Syria: The story of one child bride

NABATIEH, Lebanon – In late 2013, Haneen, now 14, fled Syria with her parents and 10 siblings. As her family made its way to the Turkish border, her father sustained injuries that left him paralyzed. Fearing he could no longer feed his 11 children or protect his daughters, he married Haneen, then 13, off to a middle-aged Turkish man. The family didn’t even know his name.

“When we left Syria, we had nothing to eat. We ate hunger, and we used to hear about kidnapping and rape all the time,” said Haneen’s father. “I thought Haneen would be safe if she got married.”

He soon found out that he was wrong.

Shortly after Haneen’s marriage, the family received a small sum of money, and decided they might fare better in Lebanon. They soon departed Türkiye, leaving Haneen behind with her new husband. Three months later, her mother received a call.

Through her tears, Haneen reported that she had tried to commit suicide twice and that her husband regularly beat and mistreated her. Also, barely 14, she said that she was pregnant. “Haneen was scared, and she didn’t know anyone in Türkiye,” says her mother. “She was all alone.”

Confronting a dangerous lack of services

Today, after five years of conflict, over five million Syrian women and adolescent girls of reproductive age have been forced to flee their homes – and 430,000 of them are pregnant and in need of care. However, for these women moving through the conflict zones of Syria and across vast expanses of land and sea throughout the region and on into Northern and Western Europe, sexual and reproductive health services are scarce – and sexual and gender-based violence is common. 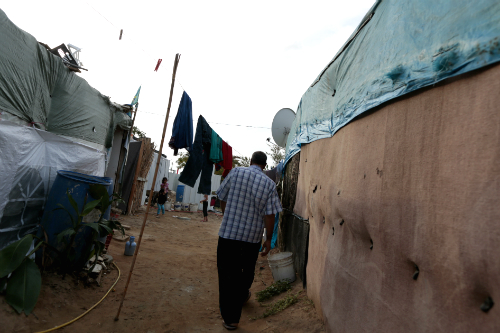 A community leader makes his way through the temporary settlement to Haneen's tent. © UNFPA/David Brunetti

Focus groups and interviews conducted by UNFPA in the last quarter of 2015 reveal that child marriage is now common throughout Syria and that, as the situation continues to deteriorate, the girls are marrying at younger and younger ages. According to early data from a survey currently being completed by UNICEF, 25 per cent of Syrian girls in Lebanon are married before the age of 16.

Adolescents are at an increased risk of complications in pregnancy or childbirth, and these complications are a leading cause of death among older adolescents in developing countries worldwide.

“For an adolescent girl like Haneen who is about to deliver, or a woman who went through an ordeal such as sexual violence, life-saving services such as being able to deliver in a clean medical environment or finding support after a violent incident are as vital as water, food and shelter,” said UNFPA’s Executive Director, Dr. Babatunde Osotimehin. “Yet these services are rarely a priority for donors or prime stories for the media, and they unfortunately remain underfunded and underreported.”

Reaching women and girls in need

Eight months pregnant herself when she received her daughter’s distraught call, Haneen’s mother waited to give birth, then left her infant and 10 other children – all under the age of 13 – with their paralyzed father to return to Türkiye and to Haneen. It took three months, but eventually she managed to make her way back to the camp, collect Haneen and return to her family.

But that was not the end of their challenges.

Because Haneen had been her husband’s second wife and was underage, their marriage was not legal under Turkish law and had never been registered, which made it difficult for Haneen to register her pregnancy and receive health care.

The UNFPA is supporting 148 women’s centres and safe spaces in Syria, Jordan, Lebanon, Iraq, Türkiye and Egypt where women can access sexual and reproductive health care, as well as counselling and gender-based violence services, including clinical management of rape. In Jordan’s Zaatari camp for refugees alone, nearly 5,000 babies have been delivered in a UNFPA centre without a single maternal death.

In Greece and the Balkans, where hundreds of thousands of refugees have stopped along their route to the rest of Europe, the UNFPA is distributing dignity kits, which provide women with critical hygiene and health items, and supporting numerous mobile clinics that offer reproductive health services.

Eventually, Haneen and her parents found one such UNFPA-supported health centre in Lebanon.

“I am worried about the delivery, as Haneen is too young to have a baby, and she is scared,” says Haneen’s father. “However, I would not have been able to afford to take Haneen to a doctor, and am glad antenatal care is available here.”