DHAKA, Bangladesh — Thoraya Ahmed Obaid, the Executive Director of UNFPA, the United Nations Population Fund, today visited the Fistula Centre in the Dhaka Medical College Hospital and praised its staff for working to restore dignity to the suffering women and girls. She also pledged continued UNFPA support to the Centre as part of the global Campaign to End Fistula. 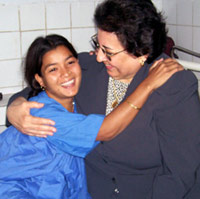 During her visit, she was moved to tears by the stories of the girls, some as young as 15, who spoke of abandonment, infertility, and loneliness. She was also touched by the restoration of hope that some young women experienced through a successful surgery.

Since 2003, when the Fistula Centre was established in Dhaka, more than 500 women have been treated through corrective surgery, and 50 doctors and 36 nurses have been trained to treat others.

UNFPA is assisting the Government of Bangladesh in strengthening services for safe motherhood and fistula, a devastating condition that results from lack of medical care during delivery.

Plans are underway to build a new wing in the hospital. The aim is to create a centre of excellence in fistula treatment and training, the first of its kind in South Asia. This would benefit neighbouring Afghanistan, India, Nepal and Pakistan, where tens of thousands of women suffer from the condition.

In addition to treatment, the hospital in Dhaka offers rehabilitation and livelihood training in literacy and sewing. Oftentimes, women with fistula are abandoned by their husbands and their own families because the condition results in the constant leaking of urine and/or faeces.

Fistula tends to affect the most powerless members of society—young, poor, illiterate women and girls living in rural areas or urban slums. It is aggravated by poverty, gender discrimination, early marriage and pregnancy, and poor health services.

Fistula remains a challenge in Bangladesh, where only 13 per cent of births are attended by a skilled medical worker and the average age of marriage for girls is only 15. Some girls are promised in marriage early in life and are expected to fulfill their marital duties at the age of 10 or 11.

The Government has responded with policies and programmes to expand schooling and reproductive health services, including skilled birth attendants. As a result, enrollment rates for girls are rising and maternal death rates have declined.

Dr. Sayeba Akhter, who started the Fistula Centre in Bangladesh, said that enormous resources are still needed to train more doctors and nurses in fistula repair and to provide services to the estimated 400,000 women and girls in the country who are suffering from this terrible condition.

In 2003, UNFPA initiated a global Campaign to End Fistula, which now covers more than 30 countries in South Asia, sub-Saharan Africa and the Arab world. Its primary goal is to make fistula as rare in developing countries as it is today in the industrialized world.

Once common throughout the world, fistula disappeared nearly a century ago in North America and Europe thanks to improvements in obstetric care. But it persists in developing countries where at least 2 million women are estimated to be afflicted.

Keeping girls in secondary school, which delays their age at marriage and pregnancy and gives them confidence and skills to negotiate and participate in the labour force, and increasing their access to reproductive health services, including family planning, are key to preventing fistula.