AFAMBO, Ethiopia – Fatuma was married off five years ago, when she was just 13. Like most girls from the remote Afar Region of Ethiopia, she had undergone female genital mutilation (FGM) when she was only a baby, and it was expected that her scars would open up during the wedding night.

But, unusually, her wounds did not open, even when she became pregnant. Instead, the scar tissue had to be cut open when she delivered her baby – an excruciating experience that continues to haunt her.

Fatuma also suffered complications after the childbirth, a dangerous time for new mothers, especially for girls who endure pregnancy before their bodies are ready. To make matters worse, her husband deserted her.

Yet Fatuma refused to despair. 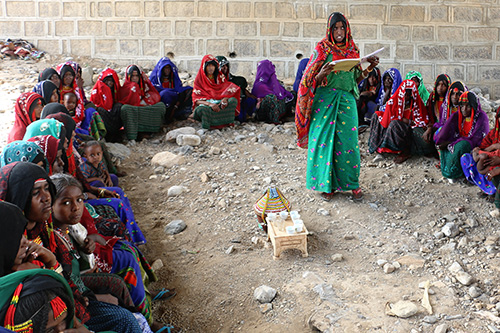 A married girls' club in session in the Afar Region of Ethiopia. © UNFPA/Abraham Gelaw

She raised her daughter as a single mom and, with the support of her parents, continued her education.  She has now completed the eighth grade, not an easy feat in her situation.

And for the past three years, Fatuma has participated in a “married girls’ club,” part of a UNFPA-supported programme fighting child marriage and FGM in seven localities in the Afambo District.

“The programme has given me the chance to interact with married girls, many of whom passed through an experience similar to mine,” Fatuma said.

“We discuss how we could contribute to ending these harmful practices.”

The Afar Region has one of the highest FGM prevalence rates in Ethiopia. Girls in Afar, and especially in the Afambo area, where Fatuma is from, may be cut as early as the seventh day of life.

The type of FGM commonly performed, infibulation, is the most extensive. It involves the removal of the clitoris and the labia, after which the wounds are sealed, leaving only a small hole for urination and menstruation. The practice can lead to a lifetime of health complications, affecting women through marriage, pregnancy and childbirth.

Child marriage is also too common in Ethiopia. According to the most recent demographic and health survey, the median age of marriage for women is 16.

In 2006, regional government officials, religious leaders and community leaders pledged to abandon FGM. They soon also took up the fight against child marriage. In the decade that followed, a programme to end both child marriage and FGM was launched in Afar, raising awareness of the harms caused by these practices, and empowering girls to stand up for their rights.

The programme Fatuma joined teaches girls about their human rights. Implemented by the Afar Region Women’s and Children’s Affairs Bureau, with funding from the UN Association in Sweden, it gives girls a safe space to share their personal experiences. It also empowers them to become advocates in their communities.

Today, Fatuma is married to a young man whom she loves. He is a student in the eleventh grade, and he supports her goal of continuing her education.

Unfortunately, she has had to take a break from school. Her second child was born only two months ago, making the 20 km commute to the nearest school impossible. Still, she remains active in the married girls’ club and is committed to one day continuing her education. She wants to become an obstetrician.

“I am a living witness to the unspeakable harms of FGM and child marriage, and I will continue to teach my community to spare their daughters this ordeal,” she said. 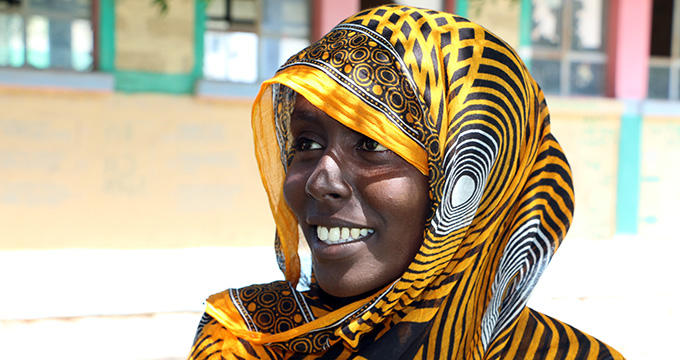