COX’S BAZAR, Bangladesh – Early monsoon rains have arrived in Cox’s Bazar, Bangladesh, where hundreds of thousands of Rohingya refugees are living in flimsy tents of bamboo and tarpaulin, renewing fears of flooding, mudslides, water-borne diseases and further displacement among an already beleaguered population.

Some 693,000 Rohingya refugees have crossed the border in the past eight months alone, following extreme violence in Myanmar’s Rakhine State. They join hundreds of thousands of other Rohingya refugees already living in the area. It is estimated that 1.3 million people are now in need of humanitarian assistance, including the new arrivals, the earlier arrivals and the overburdened host communities.

The makeshift camps are set upon steep, often bare hillsides – sites ill equipped to endure the lashing winds and pounding rains of the country’s cyclone and monsoon seasons.

The early rains have already triggered flooding and damage, according to the International Organization for Migration (IOM), which estimates that 120,000 people will be threatened by floodwaters and landslides.

UNFPA is working with partners to secure the safety and dignity of those in need.

“We recognise that this may become an emergency within an emergency,” said Hassan Abdi, UNFPA’s reproductive health coordinator in Cox's Bazar. 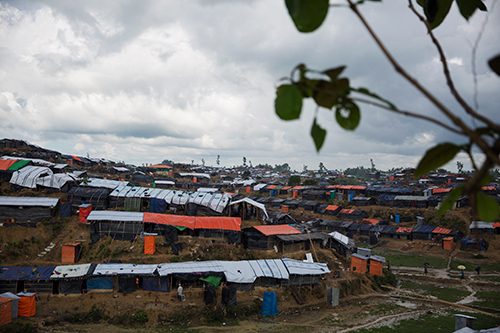 The camp sites are ill equipped to withstand the coming rains. © UNFPA/Prince Naymuzzaman

The refugees suffered extraordinary hardships before reaching the relative safety of Cox’s Bazar. Armed violence, arson, sexual violence and the long trek to Bangladesh have taken a serious toll on the population.

Since August 2017, UNFPA has distributed dignity kits – which include hygiene supplies such as soap and sanitary napkins – to over 110,000 refugees. UNFPA-deployed midwives and health staff have screened more than 250,000 women and girls, and provided antenatal care to 72,000 women.

UNFPA is also operating 19 women-friendly spaces across many of the camps. There, trained staff provide counselling, support, information and referral services to vulnerable women and girls, and refugees are able to rebuild networks and recover a sense of community.

But these services could be at risk because facilities are currently placed where they are accessible to refugees – in areas that may be vulnerable to flooding and mudslides.

Thousands of people are now being relocated to safer ground by United Nations agencies and partners.

UNFPA is searching for safer areas to relocate its women-friendly spaces, and is buttressing existing structures to withstand the coming rains. Reproductive health clinics are also preparing contingency plans, such as relocating services and changing operating times.

“UNFPA is working to ensure continuous service for the community, as we know women and girls are most vulnerable and affected during emergencies,” said Mr. Abdi. 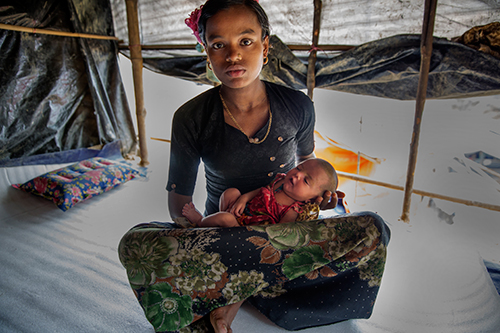 Outbreaks of water- and vector-borne diseases could threaten the health of pregnant women, post-partum mothers and newborns. © UNFPA/Prince Naymuzzaman

Women take the lead on preparation

UNFPA’s women-friendly spaces are also offering information sessions to help refugees prepare for the coming rains, including how to recognize warning signals and where to seek help.

Attendees are advised to keep their families together if possible, protect their possessions from water, and take particular care of especially vulnerable persons, such as women in their last trimester of pregnancy.

One woman said the plastic roof of her shelter rattles around in the wind. “At home we had sturdy, safe houses, so I’m learning a lot here,” she said.

These women are not alone.

By some measures, refugee women are taking the lead in monsoon preparation. An IOM report indicates women regularly outnumber men in workshops teaching how to upgrade shelters for the season.

United Nations health experts are also preparing for possible outbreaks of water- and vector-borne diseases, should sanitation conditions deteriorate or health-care access become disrupted. The spread of these diseases could imperil the health of pregnant women, post-partum women and newborns.

At its clinics, UNFPA is providing information about World Health Organization efforts to vaccinate against acute watery diarrhoea.

And as part of its contingency planning, UNFPA is pre-positioning dignity kits, medicines, reproductive health supplies, and materials for women-friendly spaces and clinics, should these materials be needed under crisis conditions.