TUMBES, Peru – “I have been told that it was too dangerous to travel alone, but I did it for my family’s and my own well-being,” said Britney, 18, part of a mass exodus of people leaving Venezuela in search of a better future.

The escalation of tensions and economic hardship have compelled millions to exit Venezuela. “The number of refugees and migrants from Venezuela worldwide now stands at 3.4 million,” the United Nations Refugee Agency and the International Organization for Migration said in a joint statement this week.

Peru now hosts the second largest number of exiting Venezuelans, after Colombia. Since 2017, more than 648,000 Venezuelan migrants have crossed the border into Peru, according to Peru’s National Immigration Superintendence. Approximately 42 per cent of them are women.

Women and girl migrants are especially vulnerable. Many fear sexual violence and exploitation as they travel great distances, often alone.

A looming threat of violence

“I have been fearful since one doesn’t know what some people’s intentions are,” Britney said about the people she encountered during her eight-day journey, on foot, from her hometown in Valle de la Pascua.

“They can kidnap you or force you to go into prostitution. At some point, there is a need to talk to someone, and I will always think: Will that be a good or a bad person? A lone woman runs all the existing risks in the world.”

Many women and adolescents have banded together in groups to help one another, but this strategy does not offer sufficient protection.

In the first few weeks of 2019, UNFPA registered and assisted 21 cases of violence against Venezuelan women at the Border’s Binational Attention Center (known by the Spanish acronym CEBAF).

At the centre, Britney received information about recognizing gender-based violence and how to find help.

It was part of a range of assistance UNFPA is providing at CEBAF. This includes providing referrals to protection services and legal assistance. It also includes sexual and reproductive health services, such as family planning counselling, screenings for sexually transmitted infections, and antenatal services.

The perils can be even greater for pregnant women. On average, 80 pregnant Venezuelan women arrive in Peru every month.

Mariana, 30, is one of them. At five months pregnant, she left her home on Venezuela’s Margarita Island, and recently arrived at CEBAF.

“We left because I would not be able to raise a child over there,” she explained. “We were not able to obtain either medicines or food.”

On her way, she and her husband slept in the open, without any shelter. “During the travel, we would sleep in the streets and wake up in the streets, until we arrived here,” she said.

“We have been traveling for a week without being able to sleep, take a shower or eat well. I get tired easily, and have vomiting and headaches. It is very tough. I am scared.”

Mariana received an antenatal check up at CEBAF. She was relieved to learn her baby is fine.

In the first few weeks of 2019, UNFPA provided sexual and reproductive health services and support related to gender-based violence to 5,500 Venezuelan women at CEBAF.

In addition, UNFPA has distributed more than 6,000 dignity kits, which contain hygiene supplies such as soap, underwear and sanitary napkins.

UNFPA is also providing technical assistance to the Government of Peru to extend essential protection services and health care to Venezuelan migrants.

Still, much more is needed to ensure women can secure a better future for themselves and their families.

Despite the challenges, some women say the gruelling trek to Peru has had a silver lining: It has shown them their strength. 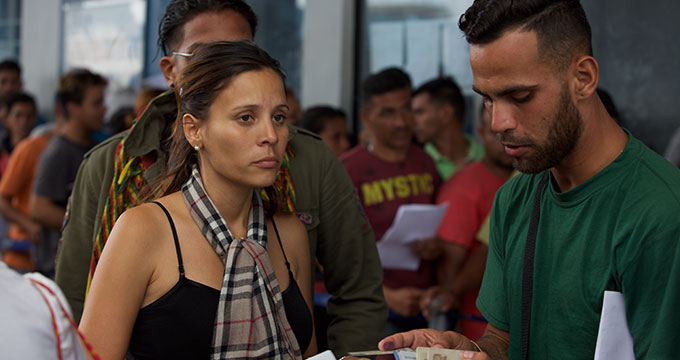