KISUMU, Kenya — In a makeshift room inside an unfinished building in the Manyatta slums in the Western Kenyan city of Kisumu, the neighbourhood’s men regularly congregate to discuss community matters, usually in the presence of the area chief.

But the May 21 baraza (a chief’s gathering) was of a different kind. A community health worker engaged the over 50 men on family planning, an issue they are uncomfortable about.

"Family planning is only for women. And it makes them promiscuous. I would never advise my wife to use those things [contraceptives] because the role of a woman is to give birth to children," Zaddock Odhiambo, a 28-year-old father of six remarked.

His counterpart, Damascus Chemonges, holds that family planning is dangerous. "I hear that it makes women give birth to children without ears and eyes. I think couples should space their children through natural means only. They were doing it before the introduction of family planning anyway."

When asked if he was aware of vasectomy (a minor surgical procedure which stops sperm from being released when a man ejaculates), Chemonges said, "When a man undergoes vasectomy, it will cause death in the home. Besides, the man will become impotent and the wife will start sleeping outside and will bring him children that are not his."

The response at meetings such as this has raised questions about male involvement in reproductive and maternal health.

Men not playing their part

According to UNFPA, the United Nations Population Fund: "It is men who usually decide on the number and variety of sexual relationships, timing and frequency of sexual activity and use of contraceptives, sometimes through coercion or violence".

There are many examples of this. "I started taking pills discreetly because I didn’t want more children given that I have four already. When my husband discovered he looked for the pills and threw them away, threatening to kill me if I continued taking them," Margaret Akoth from Manyatta told Inter Press Service.

She later went to a health facility and asked to be given a family planning method which her husband would not so easily find out about. She is now on a three-month injectable contraceptive. "I have to hide behind taking the baby for check-up, then visit the clinic to get the injection. He is now questioning why I am not getting pregnant," Akoth added.

It is not only wives who are threatened. Community health workers who seek to provide family planning education and distribute contraceptives have faced hostility from the men who accuse them of ruining families. Rose Ochieng’, a community health worker in Nyalunya, 17 kilometres from Kisumu told Inter Press Service she has been confronted several times by men who have threatened to "teach her a lesson" if she continues with her work.

She cited an incident where some of her colleagues have fled for their lives, chased away by hostile men. Health practitioners fear that the target of reducing maternal deaths by 75 per cent by the set deadline of 2015 will not be met without concerted efforts of all, including men. 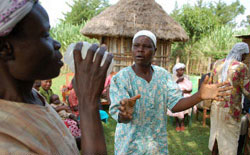 Several programmes are working with men to dispell myths about family planning.

But men’s low acceptance and near rejection of family planning is due to numerous reasons according to preliminary findings of a joint study by the Kisumu Medical Education Trust – a community based organization involved in provision of reproductive health services in western Kenya – and Boston University. Research was conducted between December 2008 and January 2009 in Rift Valley, Nyanza and Western provinces found that most men were reluctant to visit reproductive health clinics for advice on family planning because they viewed the facilities as a ‘women’s place’, and did not want to mix with women for fear of being seen to be henpecked or considered effeminate.

The overriding factors are widespread myths and misconceptions about family planning for women and men. A majority of the male respondents indicated that family planning made a woman cold in bed, while many others elicited fears that vasectomy would render them unable to have sex. They held that this would harm their standing in society, as well as cause their spouses to look for other partners.

Health care givers cite the need to dispel such rumours in order to increase uptake of family planning methods. For example, vasectomy, regarded as one of the most effective means of birth control, is offered free of charge at Marie Stopes Clinic in Kisumu. Yet Dr Charles Ochieng’ has only conducted six since beginning of the year - and this figure is an improvement compared to previous years.

The fear of what might happen in the event that a man loses children either through death or divorce, given that vasectomy is irreversible, also prevails. "...it is not that we do not want vasectomy, but I have seen a situation where a friend of mine who had four children lost all of them - and his wife. I do not see myself doing such miracles to my body," one of the male respondents interviewed in the study said.

While some of these concerns may be valid, Ochieng’ - who has himself undergone a vasectomy - wants the myths dispelled. "It is not true that a vasectomy causes a man to lose his sex drive, neither is it true that a man becomes impotent. A man who has undergone vasectomy performs his sexual duties normally, only that a woman cannot get pregnant, that is why it is an efficient birth control method."

"Under this strategy, community health and extension workers have been on the ground talking to everyone including men about family planning. They are creating awareness about different methods for men and women and therefore men should show interest in family planning," Josephine Kibaru, head of the Family Health Department within the ministry of Public Health and Sanitation told Inter Press Service.

Several reproductive health institutions have devised other ways of reaching out to men to ensure increased involvement in family planning. For example, the Marie Stopes Clinic in Kisumu is targeting men and boys at their favourite pastimes. The clinic has begun organizing football, boat and bicycle riding competitions, where officials take advantage of the opportunity to disseminate family planning information.

"There is progress. We are beginning to see men participate in discussions on family planning. They are asking questions and even some have started visiting the clinic for further information," George Yogar, a deputy manager at the clinic.

A family planning programme in Zimbabwe has been cited as a success story for creating a campaign to reach men using communication channels that appealed to them. The 1993-1994 project used a combination of radio and television programming, print materials and community events such as drama and sporting events to encourage couples to embark on long-term and birth control methods. In the process, the campaign succeeded in promoting male participation in family planning decision-making.

Bodily autonomy: a cornerstone for achieving gender equality and universal…