KAPILVASTU DISTRICT, Nepal — Thanks to a recent hysterectomy, Dhana Kala Rokka Magar feels like a new person. At age 60, she has become a passionate health advocate, in the hopes that others will not suffer as much as she has, after 28 years of dealing with the misery of a prolapsed uterus.

For most of her life, Dhana Kala lived in Arghakhanchi, a hilly district where access to health services is severely limited. The only health post was a six-hour hike away; and during all of her seven pregnancies, she never visited a health clinic or had obstetric care.

After the birth of her second child, Dhana Kala’s uterine muscles loosened causing her womb to fall slightly. With each successive pregnancy and continuous heavy work – farming, fetching water and collecting firewood and fodder – the problem got worse.

”Because I was too shy and too poor I didn’t tell anybody,” she said. “I didn’t know whether the problem was curable or not. I never had a chance to arrange for a safe delivery.’

During her seventh delivery, at age 32, her whole uterus came out with the baby. “The neighbours, who helped during delivery, pushed it back into my body and wrapped my private parts in plastic,” she said. After delivery I did not have enough food. I didn’t go to the doctor. My uterus kept falling out and I suffered a lot. I could not move, I was in pain while working.” 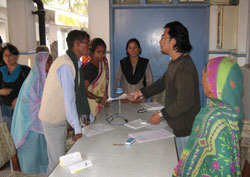 Registering for treatment to correct uterine prolapse at the Kapilvastu district hospital.

A common problem in Nepal

Uterine prolapse can result from prolonged labour, too early or too closely-spaced pregnancies, improper delivery techniques and resuming work too soon after childbirth. All of these conditions are common in rural Nepal, where child marriage is common, family planning use is low, women typically carry firewood and other heavy loads and nine out of ten give birth at home without a skilled birth attendant.

The condition affects some 600,000 Nepalese women, according to a 2006 demographic and health survey, and 200,000 are in need of immediate corrective surgery. It cross-cuts every social, ethnic and geographic group in Nepal and occurs in girls as young as 16.

The condition has various degrees of severity. In third-degree prolapse, when the uterus falls completely out of the body, women typically experience incontinence and frequent infections, often leading to isolation or even abuse. “My husband started to beat me and threatened to take a second wife,” recalls Dhana Kala. “My mother-in-law thought I was not working well enough and was not taking good care of my hygiene.”

Camps to treat uterine prolapse and other gynaecological conditions

In 1988, Nepal established a system of female community health volunteers who help disseminate health information throughout the country. It was through one of these health workers that Dhana Kala learned last year that her problem could be cured, and that a surgical camp for this purpose was to take place at the village hospital.

Although the surgery is offered free of charge, Dhana Kala was initially worried that she would not be able to afford transportation to the hospital or the related expenses. However, organizers of the camp covered all her costs, and her local health volunteer made the necessary arrangements.

The surgery, which took place last November at the hospital in Taulikhawa, was a success. Afterwards, for the first time in almost three decades, Dhana Kala felt comfortable with her body. Once again her family treats her with respect. And she has found a new purpose in life: telling others how to protect themselves.

‘No human being deserves to suffer like I did,” she said. “I’m going to convince all the women in my community to have medical check-ups and get treatment if they’re having problems.”

Treatment for a growing number of women

“Uterine prolapse is preventable and easily curable,” notes Anna Adhikari of UNFPA, the United Nations Population Fund. “Stories like Dhana Kala’s occur, among other reasons, because there are no services and contraceptives, because a woman has too many children too often and due to a lack of skilled birth attendants.” Addressing the issue is a top priority of UNFPA in Nepal, she added.

Thanks to the hard work and advocacy of various organizations, the Government has provided funds for the free surgical treatment for 12,000 women with the condition since 2005, and the number has been increasing yearly. In support of this, surgical camps are organized periodically with support from UNFPA, the European Commission’s Humanitarian Aid department (ECHO), Denmark, Great Britain and Japan.