SANLIURFA, Turkey – Refugee women and girls face extraordinary hardships. They endure grave risks and often brutal violence, and many are thrust into poverty. But they can also face another, more intimate, hardship, one that is seldom discussed – the effects of exile on their sexual and reproductive health.

Some 475,000 Syrian refugees have sought safety in the desert city of Sanliurfa, Turkey, an hour’s drive from the Syrian border. To meet their needs, UNFPA is operating four women’s and girls’ safe spaces in the city, which are all supported by European Union Civil Protection and Humanitarian Aid Operations (ECHO).

These centres offer health and social services for the refugees, as well as other support. The lobbies are crowded with women waiting to see doctors and midwives for gynaecological care.

“The main challenge is infections due to poor hygiene,” said Neval, a UNFPA-supported midwife at the Devtesti safe space. “The infections often start happening in Syria, where women lack access to clean water and hygiene supplies.”

There have been no studies into the prevalence of these infections, or their relationship to hygiene practices. But health workers across several clinics said these complaints are commonplace among refugees, and may be exacerbated by poor living conditions.

The infections also affect pregnant refugees, who face additional risks, such as malnutrition. “Usually, with pregnant women, both infections and anaemia are very common,” said Mesa, another midwife at the Devtesti centre.

The gynaecological infections are widespread, noted health workers at the Hayati Harrani safe space, in the neighbourhood of Eyyubiye, which has a high concentration of Syrian refugees.

“The biggest problem we see are vaginal infections, anaemia and malnutrition,” said Huda, a Syrian refugee and midwife working at the centre.

“Treatments are available, but the cases are simply too numerous. This is the challenge,” said Dr. Hadel Bakjaje. She says she sees up to 15 women per day with vaginitis.

The condition is not simply a nuisance.

Some infections, like bacterial vaginosis, can lead to pelvic inflammatory disease and infertility. Others, like trichomoniasis, can increase women’s vulnerability to sexually transmitted infections like HIV, and in pregnant women can cause low birth weight and preterm delivery.

“It can become chronic and can cause miscarriages and early births,” said Dr. Bakjaje. “We have seen these complications.”

The prevalence of these conditions also signals the low status of women and girls, with poverty, shame and gender inequality eroding their ability to secure even their basic hygiene essentials.

The majority of refugee families in Sanliurfa choose to live outside the refugee camps, hoping to build a normal life. But many cannot afford proper housing.

“Many of them don’t live in flats. They often live in unoccupied shops, one room only, where 15 to 20 people are crowded all together,” explained Saha Ciftci, a UNFPA health mediator who goes door-to door to help refugees access health services. “Storerooms don’t have running water or utilities.”

Many have difficulty managing menstruation or post-partum bleeding. “Post-partum mothers living in these conditions cannot care for themselves properly,” said Ms. Ciftci.

And women are often not empowered to find lasting solutions. Infections such as trichomoniasis, for example, are sexually transmitted, but “men refuse to get treatment, so women can be infected again and again,” Dr. Bakjaje said.

“Men refuse treatment because of shame and ignorance,” she added. “The mentality is that women are to blame, not the men. They don’t use condoms.”

The four safe spaces in Sanliurfa are part of UNFPA’s support to the Turkish government’s humanitarian relief operations. Run together with its partner, Harran University, these health facilities are working to meet women’s basic needs.

Between the start of 2017 and May 2018, the centres reached nearly 33,000 women and girls with sexual and reproductive health services.

“But as long as their situation is so dire,” Ms. Ciftci said, “the same problems will continue to recur.” 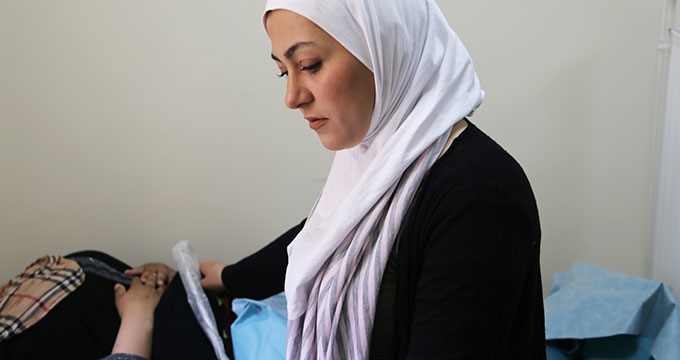