The Executive Director in Liberia

At 770 deaths per 100,000 live births, Liberia's maternal mortality is one of the highest in the world. But this situation is improving – four years ago the rate was 994.

Liberia's ambitious 5-year plan to improve maternal health aims to increase the number of skilled birth attendants by 50 per cent and to increase the coverage and access of quality comprehensive and basic emergency obstetric and newborn care. It also calls for increased family planning services and stronger community management of maternal and newborn health. These strategies have proven to be critical in reducing maternal deaths. 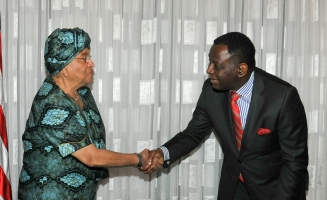 Babatunde is welcomed to Liberia by Her Excellency Ellen Johnson-Sirleaf, President of the Republic. Photo: UNFPA Liberia

"I commend the Government of Liberia for choosing MDG 5 on improving maternal health under the MDG Acceleration Framework. It has multiplier effects on gender and maternal and child health. Liberia will have access to UNFPA's full range of technical expertise in working toward this important goal," said Dr. Osotimehin.

He also praised the Liberian president and her government for progress on women's economic empowerment and efforts to prevent and respond to combating sexual and gender-based violence.

"UNFPA has been working with the Government of Liberia and we will like to do far more in order to ensure that we reach every woman and every girl with the appropriate sexual and reproductive health information, education and services that can help them make better choices," the UNFPA Executive Director said. 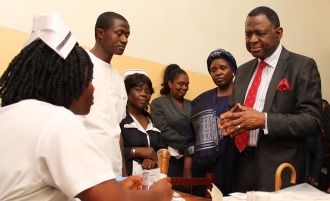 A nurse providing family planning services in the Redemption Hospital talks about her work with the Executive Director. Photo: UNFPA Liberia

The Executive Director also visited to Redemption Hospital, a 200-bed facility that afforded him an insider's look into the state of health delivery in Liberia, particularly the challenges of delivering quality emergency obstetric care services required for reducing maternal deaths. Supported by UNFPA, the hospital provides Emergency Obstetric and Neo-natal Care and lifesaving skills training for intern doctors, nurses, midwives and physician assistants. The hospital also serves as one of the 11 fistula repair sites in Liberia.

Dr. Osotimehin promised that UNFPA would continue to support the Redemption Hospital in the training of intern doctors, nurses, midwives and physician assistants to provide EmONC services and in lifesaving skills. He stressed the need to increase the stock of mid-level health workers to meet the challenges of delivering quality emergency obstetric care services required for reducing maternal deaths. "Obstetricians and gynaecologists cannot do it alone. We need to increase the stock of midwives and community health workers," he noted.

The Executive Director also had the opportunity to share a moment with some survivors of obstetric fistula. UNFPA supports the Liberia Fistula Project at the Ministry of Health and Social Welfare. 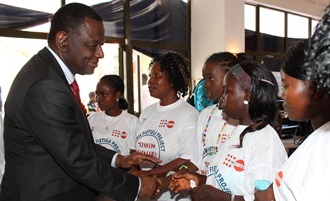 Data for development in Liberia

During his visit. the Executive Director was updated on the results of the 2008 Liberia National Population and Housing Census. UNFPA is the lead agency that supported the planning, conduct, analysis and dissemination of the census, which has made reliable data available for development planning for the first time in 24 years. It also provided an up-to-date sampling frame for sample surveys in Liberia.

At a presenation of  the census results, including analysis of thematic areas by the Liberia Institute of Statistics and Geo-Information Services, Dr. Osotimehin said the availability of improved data is vital for evidence-based decision- making and policy formulation. "The availability of data will enhance planning and can be utilized in articulating the cross-cutting thematic linkages between population dynamics, health, gender, and other areas pertinent to adolescents and youth," he said.

Dr. Osotimehin called for special attention to issues affecting the young people of Liberia who constitute 63 per cent of the total population. "Human capacity is the most important resource any country has. If we direct investment in young people's education and health, and they make the right choices, they can actually drive the economy," he noted.

The programme was attended by the Vice President of Liberia Ambassador Joseph N. Boakai. Vice-President Boakai commended UNFPA for its commitment to partnership and role in helping the Liberia's development drive.