BANGLADESH — Grinning with nervousness and excitement, a group of teenagers stands up and asks rapid-fire questions: What’s your name? How old are you? Are you married? How old were you when you were married? How and where did you learn about sex? Smiling in return, the Members of Parliament respond in kind: What are you learning that is useful? When do you want to get married? How do you stop an early marriage from happening? What do your friends and family members think about what you’re doing? What impact has this programme had on your life? 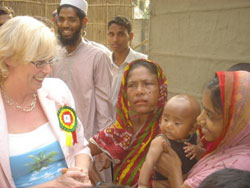 "I am really convinced about the power of the project….the way of orienting young people into life." - Ms. Magda de Meyer, MP, Belgium Photo: Neil Datta

The discussion took place during a recent visit of Members of Parliament from Belgium, Germany, Portugal and the United Kingdom to Bangladesh, one of the most densely populated countries in the world, with almost 142 million people living in 147,570 km2. By the year 2050, the population of the country is projected to increase to 242 million. As a result of continuing high fertility rates, especially in poor rural areas, the country’s population is young. A full 40 per cent of the entire population is under the age of 24, while one quarter are adolescents between the ages of 10 and 19. Teenage marriage is highly prevalent.

In 2003, RHIYA came to life in Bangladesh to raise awareness among young people of sexual and reproductive health care, changes in puberty, child marriage, early pregnancy, sexually transmitted infections, HIV/AIDS and other health-related matters that remain taboo subjects in family households and society at large. RHIYA reaches out to young people by:

Since 2003, the 24 youth clubs created by RHIYA in Bangladesh have witnessed a steadily growing number of young people enthusiastically joining discussions and events, many of whom become “peer educators” and help further increase the spread of knowledge on these subjects.

"I think that this joint programme by UNFPA and the EU shows that where true partnerships are run as a team, we can really make a difference. This I will take back to Brussels."

On their visits to the programme sites, a strong emphasis was placed on interaction with the population; the delegation talked to many young people from the community, who are involved in the programme, to receive broad feedback. It was during one of these meetings that Lyn Brown described how impressed she was with the development of the healthcare sector in Bangladesh and with the RHIYA project itself: “I will tell my government to continue to fund the project”.

During the 6-day journey, the parliamentarians met with government officials, including the Finance Minister Saifur Rahman, the Minister for Health and Family Welfare, Dr Khandaker Mosharraf Hossain, the Speaker of the Bangladeshi Parliament, Mr. Jamir Udddin Sircar, and the State Minister for Youth and Sports, Fazlur Rahman. They also met with the first counsellor of the European Commission Anthony Goodwin to discuss matters of cooperation. The Bangladeshi Government highly appreciates the RHIYA-Initiatives, one of the many reasons that made the European legislators confirm that they would persuade their respective governments to enhance assistance for developing the health sector of Bangladesh.