Escape from Fallujah: Pregnant residents describe life on the run from ISIL

BAGHDAD, Iraq – Residents of the long-embattled city of Fallujah are accustomed to hardship. But even for this battle-tested population, life under the Islamic State of Iraq and the Levant (ISIL, also known as ISIS) was a nightmare, with women treated as chattel and soldiers delivering brutal punishment for the smallest infraction, or for no reason at all.

On 22 May, two and a half years into the occupation, the Iraqi army initiated a campaign to expel ISIL from Fallujah. Tens of thousands of residents took the opportunity to flee. Some 87,000 people have since been displaced from Fallujah and the surrounding areas.

“I need a miracle to forget what we have been through under ISIS,” said Ayyam*, 24, who fled the city with her husband and child. She was in the late stages of pregnancy and knew the journey would be arduous, but could not give up the chance to escape. 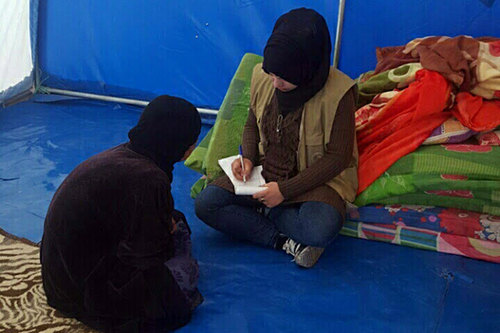 In Khaldiya, a UNFPA-supported social worker interviews a woman who has been displaced from Fallujah. These interviews are helping officials conduct a rapid assessment of gender-based violence among the displaced. © Tajdid NGO

Those who fled walked for days – some up to 72 kilometers – to reach safety. Many did not make it: Some were shot by ISIL militants, others were drowned in the Euphrates. Still others were captured.

“We fled our home with no food and no water, running through the desert and under torrid heat to reach the safe zone,” Ayyam later told a social worker in a UNFPA-supported women’s centre in Habanyia Camp.

“But we knew that making it to a safe place might be a dream, because many people who tried to escape died trying or got caught by ISIS, and what happened to them is worse than death.”

Pregnant and on the run

The journey was harrowing, especially for women who were pregnant. Many miscarried on the way, according to reports to mobile clinics and social workers. Reproductive health services had been unavailable to Fallujah residents under ISIL, and the gruelling trek to safety could prove too much.

And when the first wave of displaced people arrived, there was nothing: No tents, no supplies, no support. All they found was a place free of ISIL.

Ayyam’s family walked for two days. By the time they arrived in Habanyia, there was a camp and UNFPA was providing assistance in the form of social workers and clinics.

But when Ayyam went into labour, she was too fearful to seek out these services. Her husband, like all men fleeing the city, had been detained by government forces to be screened for ISIL ties. After the horrors she had witnessed, Ayyam refused to leave her tent without him.

Women living in the neighbouring tents helped her deliver her child. 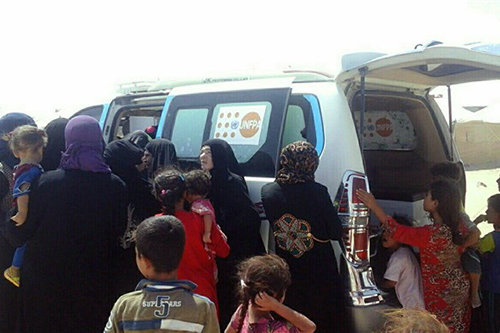 There are now more than 55,000 women and girls living in three camp complexes – Habanyia, Khaldiya and Amiriyat Fallujah – in Anbar Province.

An estimated 4,464 women are pregnant. All Fallujah residents have gone for over two years without reproductive health care. UNFPA worked with partners to meet their needs immediately. Three delivery rooms and three reproductive health clinics were quickly established. During the first month of the crisis, 321 deliveries were supported in these clinics, and 6,120 consultations were provided.

Within two weeks of the start of the displacement, UNFPA had established four safe spaces for women, and deployed three mobile teams to assist survivors of gender-based violence. More than 27 social workers were deployed and some 50 volunteers joined them.

Between 22 May and today, psychosocial support and services for violence survivors have been provided to over 21,000 women and girls. More than 19,000 dignity kits, which contain soap, sanitary napkins and other hygiene supplies, have been distributed to camp residents.

Still, these services must be scaled up.

“This intervention cannot stop, as these women need a long time to recover from their wounds,” said one social worker in a UNFPA-supported women’s centre.

With only about four months left in the year, less than half of the funding required to assist Iraq’s internally displaced population has been mobilized.

“I need a miracle”

After Ayyam gave birth, UNFPA social workers persuaded her that she would be safe in the camp, and encouraged her to receive assistance.

She now speaks to social workers at one of the women’s centres, and says that has helped her.

But life is still difficult.

“I have two children now,” she said. “I am not educated, and I have few financial resources.”

And she cannot forget that ISIL is not far away.

“I need a miracle to be better,” she said.