DELHI --- “I am overwhelmed by the sheer numbers of girls and boys and the rigour they go through every day,” said Catarina Furtado, who was visiting Jawahar Navodya Vidyalaya in Jaffarpur, Delhi, a school that implements the Adolescence Education Programme supported by UNFPA India in collaboration with the Ministry of Human Resource and Development. Ms. Furtado, a popular Portuguese television personality, who also serves as a Goodwill Ambassador for UNFPA, was in India recently to report for the 13-episode TV series, Principes do Nada (Princes of Nothing), which is aired weekly on RTP, Portugal’s main TV station.

The TV series puts a very human face on the difficulties of development and the challenges of reaching the MDGs across four countries: Haiti, India, Mozambique and South Sudan. The Goodwill Ambassador focuses on the importance of reproductive health, sexuality education and HIV prevention to delivering a world where every pregnancy is wanted, every childbirth safe and every young person’s potential fulfilled. During her visit, she and the producer of the TV series, Ricardo Freitas and video photographer, Hugo Goncalves looked at the ongoing adolescence education programme, a health facility under the National Rural Health Mission and a project to engage men in reproductive health issues. The visit to India marked the final leg of her four-country tour. 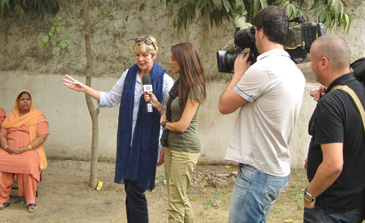 Exploring a range of sensitive subjects with students and teachers

Close interaction with some of the students and teachers in the Navodaya School provided a good opportunity for Ms. Furtado to understand the diversity of the adolescent experience depending on residence (urban or rural), caste, class, religion and cultural beliefs. She asked students about child marriage, early pregnancy, relationships with peers and parents, gender issues and sexuality. Her interactions with the children in the school were so free and forthcoming that one of the girls was encouraged to ask, “Can I call you if I have a personal problem?”

A visit to a health facility in Jharsa, Haryana district, gave the team an insight to its functioning and brought to focus the roles of various levels of health workers who help bring services to underserved communities, from Auxiliary Nurse Midwives to Anganwadi Workers. Catarina interacted with some pregnant young women who had come to seek services the facility and health staff.

On querying with one pregnant woman how she would react if her second child would be yet another girl, the woman replied, “I will be as happy as I was when I had my first child.” India is one of the countries where a traditional preference for boys has led to unhealthy sex ratio imbalances.

Ms. Furtado found other evidence to support the idea that traditional gender roles are shifting in the state of Maharasthra, where UNFPA India supports NGO partners in a project that encourages gender sensitivity among young married and unmarried men through trained, village-based facilitators in 100 villages of rural Maharashtra. 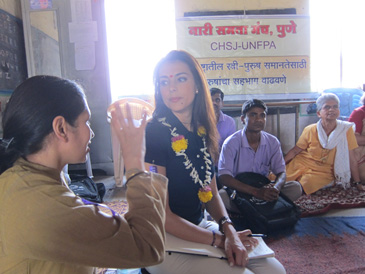 During her visit to rural Pune, one of the progressive districts of Maharashtra, Ms. Furtado received a surprising welcome that demonstrated the shifts that are occurring: a man placed the sacred kumkum, a vermillion dot, on Catarina's forehead and a garland around her neck - a custom that is traditionally is always performed by married women. As Sadhanaji, the veteran feminist and the head of the NGO Nari Samata Manch explained, gender stereotypes have to change through small everyday tasks, even the change such as this welcome ceremony, has to become routine.

Ms. Furtado was particularly struck by how quickly things are changing through the programme: men committing to marry without dowry, opening separate bank accounts for their wives and encouraging their financial independence, investing in their daughters’ education and more critically, having dreams for them as much as their sons. Many spoke about sharing household responsibilities with their wives and saying that equality can only be achieved by exercising it in one's daily life.

The Goodwill Ambassador interviewed women to understand if their experience of receiving this wave of change was indeed perceived by them as useful in promoting gender equality. They all said that true progress on gender equality cannot come without involving men, whether it is their spouses, their fathers and brothers or their male colleagues. They spoke about challenges in working as a part of typically male power structures such as the local councils.

Their confidence stemmed from the experience of running households for so long: why, then is it not possible to manage matters related to village development! A memory that will stay with Ms. Furtado as she continues her journey to work on issues of gender and health is this remark by a woman elected representative in reference to a prominent social reformer from Maharashtra, Jyotiba Phule. She said, “Even behind the success of a woman, is a man. And therefore, Savitribai Phule (wife of Jyotiba Phule) could achieve so much for the emancipation of women".