DELHI/NEW YORK – "Today, there is no country in the world, not one, where women and girls live free from violence," said UNFPA Executive Director Dr. Babatunde Osotimehin, in a statement marking the International Day for the Elimination of Violence against Women.
The day, commemorated annually on 25 November, calls for global action on preventing and ending violence against women and girls – one of the most pervasive human rights violations in the world.
About one in three women report they have experienced physical or sexual abuse. Most of this violence is perpetrated by an intimate partner.
A new study by UNFPA and the International Centre for Research on Women examines the attitudes that help perpetuate these abuses, and underscores the need to promote gender in efforts to eliminate gender-based violence.

Inequality at the root of violence

In the study, 'Masculinity, Intimate Partner Violence and Son Preference in India', 9,205 men in India were interviewed about their views on masculinity and women.
A majority of men said they were entitled to make decisions on behalf of their wives or partners. Ninety-four per cent said a woman should obey her husband. Seventy-seven per cent of men said they expected their partners to agree to sex, and 54 per cent said their partners could not use contraceptives without their permission. Sixty per cent admitted to perpetrating at least one form of intimate partner violence – ranging from emotional and economic abuse to physical violence and sexual violence.
Of the 3,158 women surveyed in the study, 52 per cent said they had experienced some form of violence from a partner in their lifetime. Thirty-eight per cent said they had been physically assaulted.

The study was released at the November 2014 MenEngage Symposium in Delhi, India, where policy experts, researchers and activists gathered to share findings and best practices on involving men and boys in ending such violence and promoting gender equality. 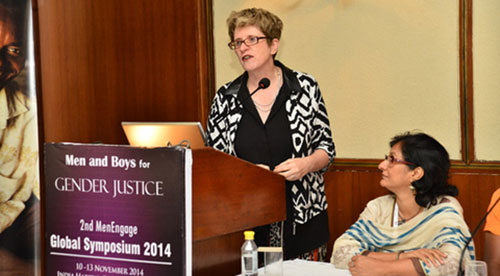 "There is power, and there are multiple realities of powerlessness," UNFPA Deputy Executive Director Kate Gilmore said at the symposium. "It is time the world got its act together."

"The study reaffirms and demonstrates that addressing inequitable gender norms and masculinity issues are at the heart" of tackling intimate partner violence, said Luis Mora, a UNFPA expert on gender and human rights.

UNFPA works closely with partner UN agencies, NGOs and governments to support survivors of gender-based violence and to strengthen protections for vulnerable women and girls. UNFPA also works with men and boys in all regions of the world to change the discriminatory attitudes that allow these abuses to persist.
"It is time to end the gender inequality and the impunity that allow this violence and human suffering to continue on such a widespread scale," Dr. Osotimehin said in his statement.
"The global community is united in its position that ending violence against women must be prioritized in the post-2015 international development agenda," he added. "UNFPA will keep pushing for a world free of violence for all women and girls. We will not stop until this violence is no longer tolerated, consigned to the shameful chapter of history where it belongs."