UNITED NATIONS, New York/Nkhata Bay, Malawi – Five years ago, people living with HIV could only receive HIV services and antiretroviral therapy (ARV) at Mzenga Health Centre in Malawi’s Nkhata Bay district on Tuesdays. As a result, anyone seen entering the clinic on that day of the week was branded as living with HIV and subjected to stigma and discrimination by the community.

“It was so pathetic that at times people pretended to come to draw water at the borehole close to the hospital, but their main intention was to see us come and get the [HIV] drugs,” says Amos Banda, age 31, who began receiving ARV at the Mzenga clinic in 2008. 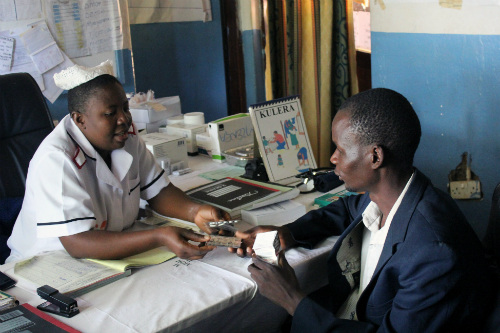 Mzenga Nurse Pilirani Gondwe meets with Amos Banda, who has been receiving HIV care at the clinic since 2008, and reports that stigma for the services has drastically declined. © UNFPA Malawi/Henry Chimbali

In addition, women in need of family planning services and oral or implant contraceptives could also only receive them one designated day a week, causing many who did not want their husbands or the community to know they were using contraceptives to stay away.

The case for integrated services

The majority of HIV infections are sexually transmitted or associated with pregnancy, childbirth and breastfeeding, making linking the services a natural fit. And the approach doesn’t only reduce stigma, it improves care.

Now that they are able to provide patients with everything they needs in one visit, instead of multiple, the staff at the Mzenga clinic is much more efficient; waits, which could last for hours on days offering popular services, like HIV care, have become manageable; and fewer people are dropping out of care. Plus, the clinic is able to reach people who might have slipped through the cracks in the past – such as men accompanying their partners for a maternal health visit who can now receive HIV and sexually transmitted infection information and testing while they wait.

The program, currently operating in fifteen pilot sites in Malawi, including Mzenga, is part of a five-year-old joint UNAIDS/UNFPA initiative to integrate HIV and sexual and reproductive health services in seven African countries – Botswana, Lesotho, Malawi, Namibia, Swaziland, Zambia and Zimbabwe – that claim seven of the world’s nine highest rates of HIV. And the pilot programs in all the countries are showing similarly positive results.

“Integrating HIV with sexual and reproductive health and rights makes smart sense,” said Julitta Onabanjo, Regional Director of UNFPA East and Southern Africa, during an event on the importance of linking the two held today during the United Nations General Assembly High-Level Meeting on Ending AIDS. “And now we have evidence to back integration. There are gains in care efficiency and also increases in patient satisfaction.”

The project hopes to use the evidence of success to scale integrated services up throughout the seven countries, the region and the world. 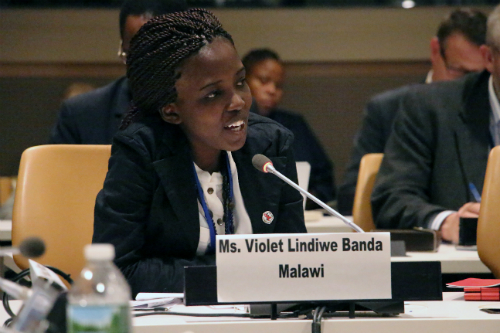 Globally, HIV remains the leading cause of death among women of reproductive age. In Malawi, the HIV rate among reproductive age adults is approximately 11 per cent, though women are much more at risk – claiming a rate of 13 per cent, compared 8 per cent among men.

Young women and adolescent girls, ages 15-24, are among the populations most vulnerable to infection. Across the Eastern and Southern African region, they are up to seven times more likely to be infected with HIV than boys of the same age – and they become infected five to seven years earlier.

The integrated care is proving effective not only in ensuring young women and adolescent girls can receive HIV care, but also other critical services, such as contraception, that have often proven hard for adolescent girls, especially those living with HIV, to access.

“As of now, in Malawi, still only a small percentage of youth have access to reproductive health services, and most are not integrated,” said Violet Lindiwe Banda, a young women who has been living with HIV since birth, during today’s High-Level event. “You cannot distribute condoms in schools. And when we young people ask for contraceptives to avoid unwanted pregnancy, the doctors [at non-integrated clinics] say no, it is not good for your health as a person living with HIV. And we just say okay. But we young people, we are having sex, and we shouldn’t have to lie about it.”