It is late afternoon and a pale February sun casts shafts of golden light through the shade trees surrounding a small square in the quiet village of Bibir Bazar, buried deep in the pancake-flat rice country of southern Bangladesh. The village looks no different than thousands of other farming communities in this cramped, over-crowded country of 130 million, surrounded on three sides by India. But beneath its bucolic appearance is a hive of activity. There is nothing ordinary about Bibir Bazar. It has become a model of community-led development that is being replicated in other parts of Bangladesh. 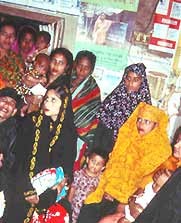 In 1996, the Department of Youth Development in nearby Comilla, the seat of the regional government, launched a UNFPA-funded project to promote gender equity through education and skills development, provide access to reproductive health and family planning services, improve community sanitation, protect the environment and reduce poverty. A local branch of the national youth club NGO -- Ghilatali Mahila Kallyan Samity - was established to implement the project. This club is administered by a dynamic woman named Ms. Monorwara Begam. Initially, the project concentrated on skills development and income generation for young women. Like adding on rooms to a house, the project expanded its base of operations to include a wealth of community development activities. Next a small health clinic was established which provided basic services along with reproductive health and family planning. Then a grade school was set up for under-privileged children whose parents could not otherwise afford the cost of school fees and books. After that the community put in sanitary latrines and provided potable piped water. But the heart of the project was and remains poverty alleviation by providing training and skills development for income generation activities made possible through a micro-credit scheme patterned after the Grameen Bank. 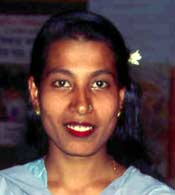 Shahina Akter, an attractive, willowy 20 year old, with long black hair, stands under one of the shade trees. She is only one of some 1,100 young women who have completed a variety of training courses and gone on to start their own small businesses. In Bibir Bazar the community decided to concentrate on dress making, basket weaving, poultry farming and raising livestock. "I joined the club out of high school in order to learn a marketable skill and spent six months learning to make dresses and scarves" she explains in a clear articulate voice. An intelligent, ambitious girl with a flair for business, Shahina took out a small loan amounting to 5,000 taka (about $100 dollars) and in no time had recruited another 20 girls for her dress making enterprise. She sells her products to stores in nearby Comilla, earning tidy profits. She also trains girls in dress making. "There are no dropouts in my class," says Shahina proudly.

Of the young women entrepreneurs churned out by the training part of the project, totaling 1,160, only 60 of them failed to establish a business. Village incomes have risen considerably, breaking the poverty cycle so evident across South Asia. Most importantly, women have economic clout, can regulate their fertility, and have fewer, healthier children later than their peers in less enabling environments.

Two other remarkable social achievements grew out of this community development effort: the age of marriage has increased from between 17 and 19 to around 24 and the old dowry system has been abandoned entirely. In fact, no one in the entire village will accept a dowry even if it is offered.

"In this village," explains Shahina, "the girls come to marriage with their own 'dowries', earned themselves. Here we are on more equal terms with men."

When asked what her life would be like without this project, Shahina is quick to respond. "I would probably have married by 19, had a child already, and remained poor and malnourished." It is very important she points out to be "self reliant and help your family."

By providing livelihoods the community has been able to develop quickly. After incomes rose, Bibir Bazar provided a host of services and infrastructure not possible in other areas beset by high infant and child mortality rates and growing numbers of uneducated, unemployed youth with no prospects of making a living.

"There is no secret to development here," says Q. Hassan, Deputy Director of the Department of Youth Development in Comilla. "It is grounded in education and skills development. Once you have the basic building blocks for earning money, everything else falls into place."