New York — When AIDS first struck in the 1980s, it mainly affected men. Today, women account for about half of the 33 million people living with HIV worldwide, and 60 per cent of those infected in sub-Saharan Africa. The large majority of these women acquired the virus through heterosexual intercourse, mostly through unprotected sex with their husbands or long-term primary partners.

“Women think marriage is a safe haven,” says Beauty Nyamwanza of Zimbabwe’s National AIDS Council. “They think that when you’re married, you don’t have to worry about HIV.”

But what the AIDS-prevention team in that country soon found out is that marriage can actually increase the risk of HIV among young women. According to research carried out in Kenya and Zambia in 2004, marriage increases the frequency of sex and hinders a woman’s ability to negotiate condom use or abstain from sex. Married women are often afraid to ask their husbands to use a condom – or to use one themselves – since this implies that they suspect their husbands of infidelity. 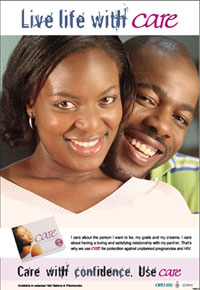 This poster is part of a major advertising campaign promoting condoms in Zimbabwe. Photo: PSI Zimbabwe

Thanks to the efforts of Ms. Nyamwanza and others, Zimbabwe is one of a handful of countries that has taken advantage of the female condom and made major inroads in promoting its use. The latest device, the FC2, is a strong, flexible, nitrile sheath, about 17 centimetres (6.7 inches) long, with a flexible ring at each end. The closed end is inserted into a woman’s body, and the open end remains outside during intercourse. Like the male condom, it offers dual protection against unintended pregnancy and sexually transmitted infections, including HIV. But it has one critical advantage: It is the only available technology for HIV prevention that women can initiate and control.

In negotiating safer sex, condom promoters in Zimbabwe encourage married women to present the female condom not as an HIV-prevention tool, but as a means of averting unintended pregnancies. This enables a woman to avoid accusing her husband of having other partners and putting her at risk.

Zimbabwe introduced the female condom in 1997, but acceptance was slow. Eventually, the Government requested support from UNFPA to scale up promotion of both male and female condoms through the public sector. Beyond training condom promoters, highly creative ways to educate the public about condom use were employed. Billboards, radio spots and TV commercials helped break down taboos against talking about condoms, and thus helped overcome the stigma sometimes associated with them. In the process of implementing the strategy, the team – which included the Ministry of Health and Child Welfare, the Zimbabwe National Family Planning Council, the National AIDS Council and Population Services International (PSI) – discovered that the female condom can be a tool for empowerment, enabling women and adolescent girls to take the initiative in protecting their own reproductive health and that of their partners.

From 2005, when the strategy was launched, to 2009, female condom distribution by the public sector in Zimbabwe increased sixfold, from about 400,000 to more than 2.5 million. Sales of female condoms through social marketing rose from about 900,000 to more than 2.1 million, and sales of male condoms also increased. The impact of the change is far-reaching: Government figures (released September 2009) estimate that HIV prevalence among adults in Zimbabwe has dropped to under 14 per cent by the end of 2009, from a high of more than 26 per cent in 1997.HIV prevalence in young women, a good proxy indicator for the trend in new infections, declined even more steeply, from 24 per cent in 1997 to 7 per cent in 2009.  Researchers attribute the decline in part to behavioural changes, including fewer sexual partners and high levels of condom use with non-regular partners.

One person who has seen the change coming is Langton Ziromba. He owns a small, outdoor barbershop in the Budirio section of Harare. In addition to haircuts, shaves and chats about football and women, Langton provides another service to his male customers: information about female condoms, how they are used, and the advantages to both partners. Langton is one of about 70 barbers and 2,000 hairdressers in Zimbabwe who have been trained to promote the female condom. He sells Zimbabwe’s most popular brand, called Care, and makes a small commission on the highly subsidized price.

“Our research shows that for this product to be accepted and used by women, we also need to involve men,” says Margaret Butau of the National Family Planning Council. “We customize the benefits of the female condom according to the target group we are addressing.” Specific points highlighted for men include the fact that the female condom is not constricting like the male condom, it is even less prone to breakage, its use does not require an erection and it can enhance pleasure for both partners. Moreover, it is not necessary to withdraw immediately after ejaculation. And, finally, it is the woman’s responsibility. “When we point all this out, we find that men become curious about having their partners try the product.”

Providing a model for other countries

The Zimbabwe campaign created by PSI that uses hairdressers to market condoms has served as a model for a similar programme in Malawi. Some 2,400 Malawian hairdressers now sell and serve as advocates for the female condom in that country. Their numbers are growing as word spreads. Sandra Mapemba, a national programme officer in the UNFPA office in Malawi, says the impact has been dramatic. “The female condom is actually empowering women to become more assertive and to stand up for their own health issues,” she says. “That’s the most exciting thing for me. Women who are in discordant relationships or women who are HIV-positive come and tell me that now they can actually insist on condom use. Before, their partners would refuse.”

The response has been so positive that UNFPA Malawi is now providing training in condom programming to some 35 international and local NGOs working on HIV-prevention in that country. Over the course of three years, female condom distribution through the public sector alone in Malawi increased from 124,000 in 2004-2005 to nearly a million in 2008.

The success of UNFPA and its partners in promoting the female condom in Zimbabwe, Malawi and also in Zambia has prompted other countries to seek similar assistance. Though global distribution of female condoms nearly tripled from 2004 to 2008 – to a total of 33 million in 90 countries – they still represent only 0.2 per cent of condom use worldwide. Key barriers are cost and availability: Not only are female condoms more expensive than male condoms – they cost as much as $1 per unit in some countries – but they are still far less widely available. Through an initiative called comprehensive condom programming, UNFPA is helping countries address these and other issues. The programme is also a platform from which other female-initiated prevention technologies still in development, including cervical caps and microbicides, will be launched.

“Giving women the power to protect themselves could turn the tide of the AIDS epidemic,” says Bidia Deperthes, who leads the comprehensive condom programming initiative for UNFPA. “But we still have a long way to go.” The largest obstacle, in her view, is funding for programming. While the majority of donors willingly contribute essential commodities, including male and female condoms, little money is allocated to laying the groundwork needed to create awareness and demand, and to train women to use condoms correctly and consistently. “It’s all part of one comprehensive package.” 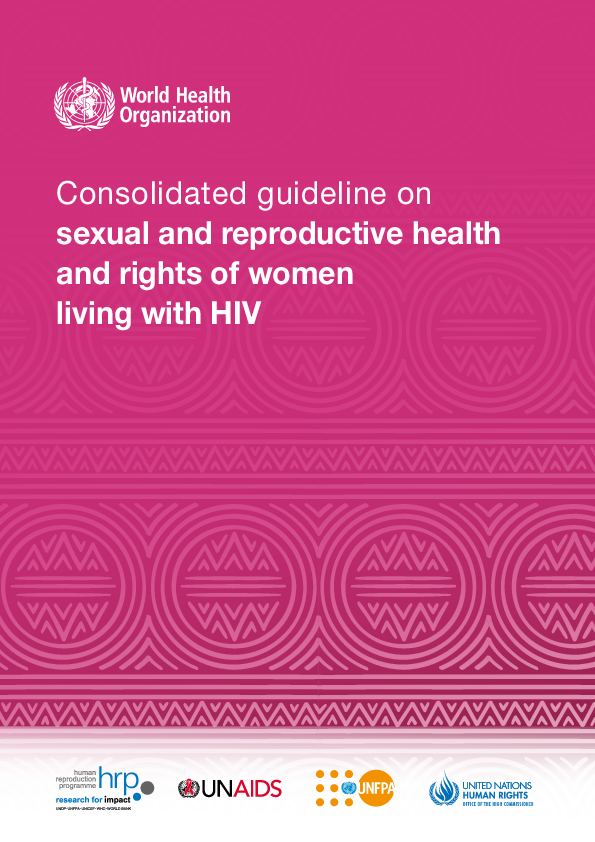 Consolidated guideline on sexual and reproductive health and rights of women…