DOKA, Sudan – Like the vast majority of women in Sudan, Haja Aicha underwent female genital mutilation (FGM)  as a child. And like many women, she says the procedure was agonizing. But unlike most people, Haja Aicha has decided to do something about it – help end the practice once and for all.

Tomorrow, 6 February, is the International Day of Zero Tolerance for FGM, a day to raise awareness of the practice and to work towards its elimination. Worldwide, there are an estimated 100 million to 140 million girls and women who have undergone some form of FGM, and if current trends continue, some 15 million more girls (aged 15-19) will be cut by 2020.

FGM is a human rights violation, and it can cause both immediate and long-term complications, including chronic pain, infections, childbirth complications, infertility and, sometimes, even death. Some 88 per cent of women and girls in Sudan have been subjected to the practice, according to the 2010 Sudan household and demographic survey.

But all this can change when community members – including women and girls – are empowered to take a stand.

Girls in Sudan, particularly those in rural areas, face entrenched inequalities. They have lower rates of school enrolment, and many are married off while still children. Haja Aicha herself received no formal education, and was married off at age 13.

Now in her early fifties, Haja Aicha lives with her family in a simple house in Doka, a rural town in Sudan’s Gedarif State. She supports her family by farming and doing janitorial work at a local municipal office. 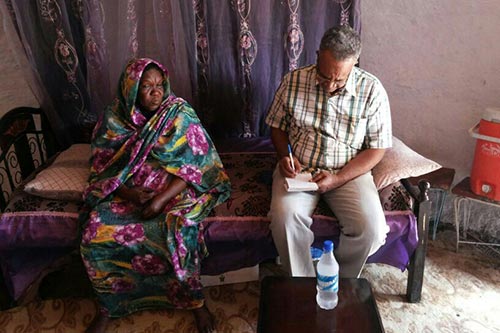 Haja Aicha is interviewed about her work to end FGM. © UNFPA

Yet she has the vision and charisma of a leader. “I always felt I had a role to play, without knowing exactly when and how,” she told UNFPA.

Her chance finally came three years ago, when she learned about a UNFPA-supported project to end FGM in the region. The programme, implemented by the University of Gedarif, teaches women about the harms of FGM, how to raise the issue with community members, and how to advocate for change.

The programme conducts outreach sessions, workshops and meetings in the community, aiming to engage women like Haja Aicha – those with little or no education, who are in need of empowerment.

The issue of FGM resonated deeply with Haja Aicha, and she found that she was a natural advocate.

“The project came just at the right time to put me on track to achieve what I had always been dreaming of,” she said. “When the facilitator was explaining the harms of FGM and early marriage, I recalled my own suffering as a circumcised girl married at the age of 13.”

She decided that no member of her family would be subjected to FGM, starting with her own young daughter, now 9 years old.

Next, she engaged her female relatives and neighbours in a discussion of the practice and its harms.

Eventually, she developed a network of women advocates. Together, they are working toward the elimination of FGM in the wider community.

The women have divided the town into blocks, with each member responsible for engaging all the women within a block. The advocates visit homes, distribute educational materials, and organize public lectures with medical doctors or religious leaders who explain that the practice is neither healthy nor religiously required.

They say they will continue until their community is declared FGM-free.

Slowly, change is coming to Sudan. An estimated 84 per cent of older adolescents have undergone the procedure – a slightly lower rate than among older women.

And the numbers will continue to fall as women become agents of change. After three years, the programme with Gedarif University has resulted in the establishment of 16 community-based organizations dedicated to ending FGM, covering the whole state.

Today, Haja Aicha says it is not difficult to approach mothers about the issue.

“Most of the women in this community have suffered once or more during their reproductive life from the consequences of FGM and early marriage, so we just ask women if they wish, as mothers, to see their beloved daughters go through the same suffering in the future," she said.

“The answer is usually no. And from there we start.” 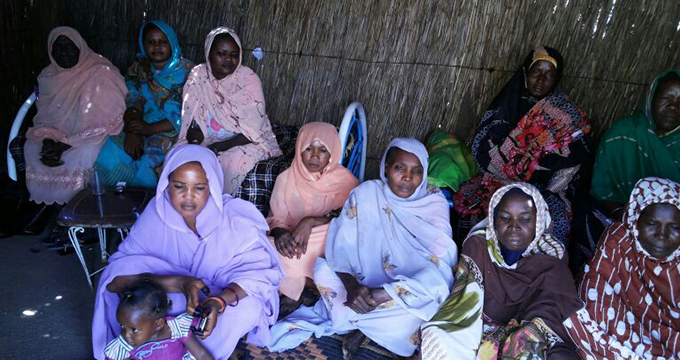