Empowering Girls in Nepal to Say ‘No’ to Child Marriage

KAPILVASTU, Nepal—Bijay Laxmi, 15 years old, has been married since she was 11. In a few months, she will move in with the family of a husband she doesn’t know. There, she will cook, clean, tend the livestock and, most likely, start having children of her own.

She knows giving birth at such a young age is dangerous, but the choice will be not hers.

“I’m sorry I was married young, but what can I do?” Bijay Laxmi asks. “I will try to convince my in-laws that it would be better if I started having children in four years.”

In Nepal, half of all girls are married by age 18, even though child marriage is against the law. Campaigns against the practice are starting to have an impact, and a growing number of girls, empowered to defend their rights, are resisting child marriage. But the change is coming too slowly and too late for many.

Too young, too poor 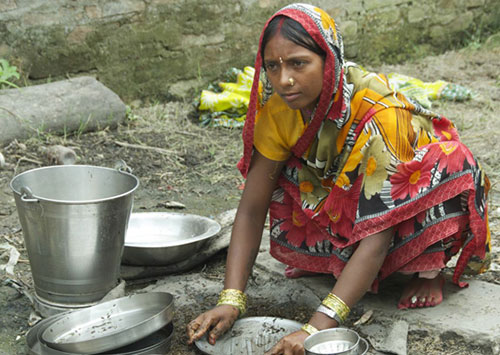 Shanti was married at age 12, but she and her husband are trying to save up some money before having children. Photo: William A. Ryan/UNFPA

Shanti, 16, has lived with her husband Ramesh and his family since she was 14. Ramesh, 17, left school after fifth grade and has no job.

“Life is hard, because my husband has no earnings,” Shanti says, and then recounts her normal routine: “Every day I cook the morning meal for my in-laws, feed the livestock, clean out the shed, watch the cattle in the field, cook the afternoon meal and then clean the pots – all by myself.”

Ramesh says it breaks his heart to tell Shanti there is no money when she needs something. “My advice to other young people is to stay in school,” he says. “Don’t get married if you can’t provide for your family.”

Unfortunately, Shanti and Ramesh had no say in whether to marry. Their parents arranged their formal marriage when he was 12 and she was 11.

Shanti gets lonely when Ramesh goes to India for months at a time to do manual labour, leaving her with her in-laws.

“I’m married now; my mother cannot look after me,” she says. “I love my husband and I don’t want him to go away. But we are poor; that’s the reality.”

“I have to bear my fate,” Shanti adds. “But I’ve told my parents: please let my sisters stay in school.”

Ramesh and Shanti are waiting to have children until they can save some money, which is atypical. Most newly married girls face strong pressure to start bearing children right away.

Suneeta Kori, at age 20, already has three daughters and a son. When she brought her youngest to a clinic for immunization, she told a health worker she was not ready to start using family planning, since her mother-in-law wants her to have one more boy.

About half of the girls worldwide who are affected by child marriage live in South Asia. This harmful practice persists for various sociocultural and economic reasons. But the common thread that runs across all ethnic groups and religions is the low status of women and girls.

The parents of both Bijay Laxmi and Shanti were both motivated by a traditional belief that they would go to heaven if their daughters were married before reaching puberty.

Child marriage often denies girls an education, and often subjects them to discrimination, domestic violence and abuse. Many start bearing children before their bodies are ready, putting them and their babies at deadly risk during childbirth.

A number of initiatives inform Nepali communities about the harm caused by child marriage and the benefits of keeping girls in school.

A UNFPA-supported programme called Choose Your Future teaches girls who are not in school about health issues and encourages the development of basic life skills.

Choose Your Future teachers try to persuade parents to let their daughters attend school full time, and many do so, especially since in Nepal girls’ education is free through grade 10.

Bijay Laxmi joined a Choose Your Future class after the teacher came to her home to explain the programme. She has already been promised to her husband’s family, and won’t go back to school. But her parents were persuaded to let a younger daughter stay in school. Prem Laxmi is now a high school student.

“Early marriage is our custom, and we didn’t know it was wrong before the teacher explained things to us,” says Malati Sebak, the girls’ mother. “But we won’t get Prem Laxmi married before she is 20.”

Girls in Choose Your Future take its message of empowerment seriously. Some have started to take matters into their own hands.

Fifteen-year-old Bijay has been married since she was 11. Photo: William A. Ryan/UNFPA

Fifteen-year-old Usha was chosen by her peers to lead her Choose Your Future class, where the girls learned that child marriage is illegal and can lead to childbirth complications. Then she learned her parents were planning to have her married.

“I was thinking, ‘I am the class leader. If I can’t prevent my own marriage, who will speak up for my classmates?’ So I confronted my mother with the help of my friends,” Usha recalls.

When Usha and her peers threatened to inform the authorities if the marriage went ahead, her parents relented and called it off.

Usha knows it pays to let girls stay in school instead of getting married. She doesn’t hesitate when asked what she’d like to become. “After I finish school, I could be a teacher or a doctor, or at least a shopkeeper,” she answers proudly.

After Usha took her stand, other girls in her group also resisted marriage plans. This created a dilemma for their parents since the dowry a bride’s family must pay increases as she gets older.

Poverty remains an underlying cause

Sabrunisha Gaddi, who has seven children and is pregnant, complained about not being able to marry off her daughter Kabrunisha, 14.

“Yes, child marriage is a problem,” she says, “but look at it from the parents’ side: we are so poor. It will be harder to marry our daughter when she is older, and we have younger ones at home.”

Winning over the mothers is crucial, says Sita Ghimire of Save the Children Nepal: “At first the mothers say, ‘I have been through child marriage and I am still surviving, so why not my daughter?’ Then we ask them, ‘How many children did you deliver; what were the problems you faced; didn’t you want to stay with your parents when you were married at age 9?’ Then they realize and say, ‘Oh yes. I will not do that to my daughter.’”

Community awareness campaigns to stop child marriage in Nepal have taken a variety of forms including radio spots and street theatre by children’s clubs. Now there is a push to step up prevention efforts, including advocacy work with men and boys.

The National Planning Commission and government ministries are working with UN agencies and civil society organizations to develop a plan of action on adolescent development that will address child marriage.

The aim is to strengthen commitments to end child marriage, so that, one day soon, girls like Bijay Laxmi, Shanti and Usha will really be able to choose their futures.