BADAKHSHAN, Afghanistan — It juts like a finger, thrusting through the freezing and windswept Pamir Mountains: jabbing through the broad plateau of Tajikistan to the north and Pakistan to the south. From there it points inexorably east to China. In Badakhshan even the border seems to be admonishing the world for a tragedy that unfolds hourly in one of the most remote and backward provinces of one of the most troubled and impoverished places on earth: the conflict-prone country of Afghanistan. 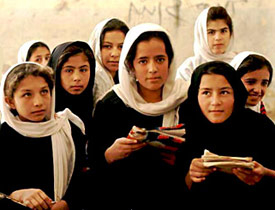 Once part of the ancient Greek kingdom of Bactria and renowned in antiquity for the quality of its gemstones, Badakhshan has now earned the dubious distinction of being home to the highest maternal mortality rate in the world. For those struggling to bring new life into this austere and merciless land—many of whom are no more than children themselves—Badakhshan’s harsh landscape and lack of infrastructure too often spells disaster for both mother and child. Few trucks, cars or other means of transportation, coupled with even fewer roads, results in delays that can easily lead to life-long disability or death. In winter, snow blocks the narrow paths that link mountain villages with main thoroughfares—often for as many as seven months at a stretch.

In Badakhshan, for every 100,000 babies born, 6,500 women will lose their lives. Healthcare workers maintain this crisis has as much to do with the low social and nutritional status of its victims as it does with the remote and rugged terrain. In Afghanistan as whole, a woman dies of pregnancy-related causes every 27 minutes of every day. In Badakhshan, a woman faces almost 600 times the risk of dying in childbirth than do her counterparts living in North America. Of the thousands of infants left motherless, 75 per cent will perish either during, or soon after, delivery.

“It is terrible,” says Dr. Ibrahim Shinwari, a programme director for UNFPA, the United Nations Population Fund, in Afghanistan. “There are no roads. There is no helicopter. There is no transportation. These people really, really suffer.”

Apart from its vertiginous cliffs, poor roads and extreme weather, one of the most significant reasons behind the persistently high death rates is gender discrimination. In Afghanistan, men are considered superior to women, and sons are generally more prized than girls. This ‘son preference’ translates into high rates of female illiteracy, malnutrition and early marriage. Indeed, women are seen as little more than commodities: they are often bought, sold or given away to rival families or clans as a means of resolving conflicts. The strong conservative patriarchy of Afghanistan is deeply rooted in its history and culture and is justified through local interpretation of Islamic teachings. Because families are so poor, parents are more likely to pool scarce resources to send their boys to school and to ensure that they remain healthy. Girl children often do without. Indeed, so entrenched is the bias against girls and women, that Afghanistan is the one of only two countries where male life expectancy exceeds that of females.

One of the more pernicious aspects of discrimination, however, lies in the widespread practice of child marriage. According to Shinwari, more than 40 per cent of Badakshani women are married before the age of 15 and often long before their immature bodies can cope with both the demands of sex and the rigours of childbirth. Girls under the age of 15 are five times more likely to die in childbirth than women in their twenties.

In Afghanistan overall, 40 per cent of girls are married before they reach the age of 18. In outlying areas, poverty, lack of awareness and the need to 'protect' young girls from premarital pregnancy encourages many parents to marry their daughters off even younger—in some cases when they are no more than seven years old. Many of the women and girls who eventually make it into Dr Shinwari’s clinic have been stunted by years of semi-starvation. This, coupled with poor infrastructure and the pressure to begin child bearing early, can be a recipe for disaster.

Haemorrhage is the leading cause of maternal death in Afghanistan overall. In Badakhshan, however, prolonged and obstructed labour accounts for most (30 per cent) maternal deaths. In the absence of emergency obstetric care, this can also lead to disabling and stigmatizing conditions such as obstetric fistula.

Other risk factors include: limited access to what few health facilities are available, lack of skilled personnel, poverty, malnutrition, the low social status of women and girls and high illiteracy rates. A recent UNICEF survey revealed that of the mothers interviewed, only 3.3 per cent had given birth in a health facility.

Lack of access to modern methods of family planning means many women are unable to choose when and how many children to have. Repeated pregnancies and deliveries can result in ‘maternal depletion’, which, in turn, increases the risk of complications. According to UNICEF, fully 97.6 per cent of married women surveyed were not using any sort of contraceptive, while 78 per cent had never even heard of family planning. Afghanistan has one of the highest fertility rates in the world with an average birth rate of 6.75 children per woman.

Today, on World Population Day, it important to note that the majority of those who suffer from prolonged and obstructed labour are young women and girls. Almost without exception, most are too young, too powerless and too marginalized to have any say as to whom and at what age they will marry, how many children they will have, and when. While many of their counterparts in wealthier nations are enjoying an education and planning for their future, thousands of these young girls die each year—often in the most bleak and impoverished circumstances imaginable.

Since 2003, the UNFPA has been working in Badakhshan to raise awareness, train health care personnel in emergency obstetric care and educate local leaders, women and their families about family planning and adequate pre- and antenatal care. In tandem with the Ministry of Women’s Affairs, the organization has also launched a campaign alerting both religious leaders and the public to the dangers posed by early marriage.

In addition to supporting four regional health clinics and one hospital, UNFPA is also providing vocational training to local women in recognition of the link between economic independence and social and reproductive wellbeing. So far, local authorities have been “very co-operative” notes Shinwari, and the women are “eager” to learn.

Nevertheless, like the snow drifts that block all movement for more than half the year, obstacles are many. “Women are so dependent on men, and families are giving far more attention to their sons instead of their daughters,” says Shinwari. “Until girls are educated, fed properly and women are able to participate in social and economic life, high maternal mortality will remain a problem for many, many years.”