CHISINAU, Republic of Moldova—“I endured nine years of consistent physical and emotional abuse at the hands of my husband,” says Angela. “I said nothing about it because I knew my circle of friends would not support me at all. Here in the Republic of Moldova, it's always the woman's fault when marriages turn sour. We have strong stereotypes in this country, especially about women's roles and functions.” 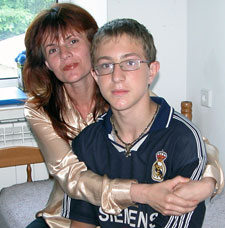 Angela and her eldest son at the shelter in Chisinau. Photo: Don Hinrichsen

A mother of two, Angela, an attractive red-haired woman in her mid-thirties, has fled her husband and her home. She found haven in the Shelter for Victims of Gender-Based Violence, located in a quiet enclave in Chisinau, the country's leafy capital. It wasn't until she found out about the shelter that she took the difficult decision to leave her husband. “It was hard for me to make the decision to leave him, even after all the beatings, including one during my fourth month of pregnancy with our second child,” recalls Angela. “Even now I only want this marriage to work, but I know it won't unless my husband changes his behaviour.”

None of her circle of friends understood her plight at all, nor offered any help when Angela did complain about her husband's systematic abuse. “I have an advanced university degree and worked as a psychologist at the Academy of Public Administration, under the auspices of the president's office,” she explains. “My friends were all accusatory. They told me: your husband is an intellectual, a university professor and you are a psychologist. Why couldn't you see this coming?"

"In this country even if a woman has social standing, she is still not respected. The general feeling is that a woman's place is in the home, not having a career."

“You have to be aware that in this country even if a woman has social standing, she is still not respected,” continues Angela. “The general feeling is that a woman's place is in the home, not having a career.”

After months of counselling and support from the Shelter, Angela began to rebuild her shattered life. It was a long and painful process. “This Shelter is the only place where I feel good about myself,” says Angela. “When I lost my high profile job, they helped me find work and also helped me find an apartment of my own. I feel like a human being here, not a number.”

Angela lives in a rented flat, while her husband occupies their house. Her two children live with her. “It's not ideal, but we are managing,” says Angela. “I also work as a volunteer counsellor here at the Shelter. This place has given me so much, I want to give something back.” 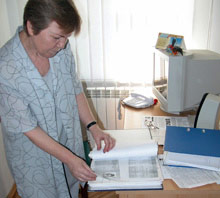 Gender-based violence is endemic in the Republic of Moldova, as it is in next-door Romania. In the first five months of 2005 alone, some 1,150 cases of domestic violence were reported to the Shelter, including five deaths and 14 women who sustained serious injuries. “This is just the tip of the iceberg,” says Tatiana Tofan, Director of the Shelter for Victims of Gender-Based Violence. “Unfortunately, domestic violence is accepted in Moldova. Many women keep silent about the abuse they endure and never report it.”

There is another stumbling block to resolving gender-based violence. “The police are not sympathetic to women who report their violent partners,” says Tatiana. “We are trying to work with the police and social services to sensitize them about domestic violence, but it's a long process.”

“UNFPA has been instrumental in helping us set up the Shelter,” says Tatiana. “They provided advice, contacts with the government and training for our counsellors.”

Thanks to a coalition of NGOs, working with UN agencies such as UNFPA and members of Parliament, the ugly reality of domestic violence is beginning to be addressed. “Before, no one wanted to get involved in this issue,” recalls Tatiana. “The Government regarded it as a women's issue, not a societal issue.”

Now attitudes are changing. A law on domestic violence has been drafted and is being considered by Parliament. The law, if passed, will require the Government to create more shelters for battered women in all regions of the country. “Right now, this is only one of two shelters in the entire country,” says Ludmila Zmuncila, head of the Gender Centre, an NGO based in Chisinau. “We need to set up more of them in both urban and rural areas.” 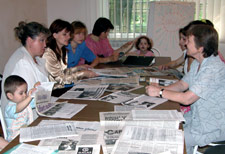 Though the Government donated the building for the Shelter, its running costs have to be met through donations. Even Tatiana is a volunteer. “I work as a journalist,” she says proudly, “and run this Shelter in my spare time. We have 25 beds here, including a kitchen, toilets and counselling rooms. We offer a complete array of services,” she continues, “but obviously we could be doing more if we had more resources.”

Since the Shelter began operating in 2004, over 1,000 women have been helped with emotional, psychological and legal support. Hundreds have lived in the Shelter for various periods of time while they were sorting out their lives. “I lived here for some three months, during my darkest days,” says Angela. “I wouldn't have made it without this Shelter and the close bonds I have formed with other women who have gone through what I have.”

Another aspect of the problem that the Shelter and its coalition of partners are trying to address is the need to work with the ‘aggressors' -- men who habitually abuse their wives and children. “What our research has shown is that we need a crisis center for aggressors,” says Ludmila. “And right now nothing like that exists.”

Women are routinely thrown out of their homes, along with their children, while the men stay put. “This is certainly not right,” says Ludmila. “The aggressors should be forced to leave, not the victims.”

As the lights of legislation are turned on this widespread problem, the country is moving in the right direction. “But this country has a long way to go,” says Angela. “I am thankful to this Shelter, UNFPA and the other organizations that are helping to bring this shameful situation into the public consciousness. Gender violence is not something we can ignore any longer. It's time to end the silence.”

Violence against women manifests itself in different ways in different societies. It may range from psychological abuse and physical harm within the family to sexual violence used as an instrument of war. As noted in a major report issued by the UN Secretary-General, all forms of violence against women represent unnacceptable violations of human rights and together they form a major impediment to gender equality. Within the UN system, UNFPA has been a leader in raising this important issue with governments and helping them to develop strategies to address it within their national action plans.