DUHOK, Iraq – Sixteen-year-old Nada* was already struggling to care for her family when her community was attacked by the Islamic State of Iraq and the Levant (ISIL, also known as ISIS). Forced to flee their home in the northern Iraqi town of Sinjar, she and her siblings spent more than a week in hiding before they were brought to a displacement camp in Dohuk.

They are among the roughly 1.8 million Iraqis who have been displaced since the beginning of the year. Ensuring the dignity and protection of affected women and young people remains a priority for UNFPA, which is supporting a variety of services, including reproductive health care and hygiene supplies.

UNFPA and partners are also providing psychosocial support – including counselling and referral to special services – to those in need. Between early August and early September, these services had benefitted 487 displaced Iraqis in Duhok, including Nada. 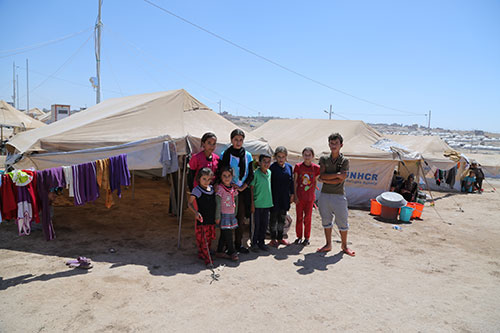 Nada (name changed) and her siblings in front of their tent in the Khanke Camp for displaced Iraqis. Photo credit: UNFPA/Millat Horiri

Nada is one of eight children. Their father died seven years ago, and about a year later, their mother disappeared. “We do not know her whereabouts,” Nada told UNFPA.

Nada’s older brother, Ala'a*, now 17, dropped out of school to earn a living, and Nada left school to look after her six younger siblings.

When the crisis in Iraq erupted earlier this year, life became even more precarious. On 2 August, Nada's neighbours warned that ISIL fighters were coming.

"We didn't believe them at the beginning, until almost the neighbourhood was deserted,” Ala'a said. “Then we decided to join our uncle and join the crowd."

They walked south for over an hour, to Sinoni Village, where they stayed for seven days. But they were not safe there, either.

"A group of fighters came to the place that we were hiding in and told us there is a white car on the way here,” Nada said. They did not know what group the fighters belonged to.

“’Run away because the car belongs to ISIL, and they will not let you go if they catch you,’" Nada remembers them saying.

They decided to travel to the Syrian border. Once there, they were transported to the Khanke Camp, in Duhok, Iraq.

Today, Nada watches over her six younger siblings in a tent in the Khanke Camp. The transition has been difficult.

"My siblings surround me at night, and all of them want to sleep hugging me to feel secure," Nada said.

It was not easy for her to explain what had happened. She did not speak at all during her first session with a psychosocial counsellor.

"She was only shaking her head with fear and looking around her, showing insecurity," a UNFPA social worker said.

After a few sessions, she was able to talk about what she had been through. "Now, she can talk,” the social worker said, “but she needs further help."

The UNFPA-supported social workers hear many stories like Nada’s.

Another girl, 13-year-old Nura*, cried at the first psychosocial session she attended, where she spoke about watching her family’s detention by ISIL.

Her parents had placed her in a neighbour’s car as the two families were fleeing.

"There was no space in my family's car, which was transporting my parents, my brother, his wife and their children, along with my 16-year-old sister."

The cars departed together, but her family’s car was soon stopped by ISIL fighters. "I saw them, and could not help them,” Nura said. “I was watching from the back window of the car, shouting and crying."

She says she saw the militants hit her father and brother. “I was helpless,” she said.

Nura now lives in a school in Dohuk that has been turned into a shelter for displaced Iraqis. She has heard rumours that her brother’s wife and their children are imprisoned and that her sister has been forced to marry an ISIL fighter. She does not know whether her parents are alive.

Still, as the violence drags on, the needs of displaced communities and those in conflict areas continue to intensify.

In the Central African Republic, the devastating price women and girls pay for…