NEW YORK --- Throughout the first week of the UN Commission on the Status of Women, UNFPA highlighted numerous issues related to violence against women and girls, the theme of this year’s session.

UNFPA-hosted events from 6 to 8 March addressed the pressing need for and difficulty of collecting accurate data on the issue; the importance of engaging men and boys in preventing gender violence; the widely tolerated denial of human rights by child marriage; and a global initiative to provide critical services for survivors of violence. Most of the UNFPA-hosted events were filled to capacity, with people sitting or standing in the aisles to hear the expert voices. 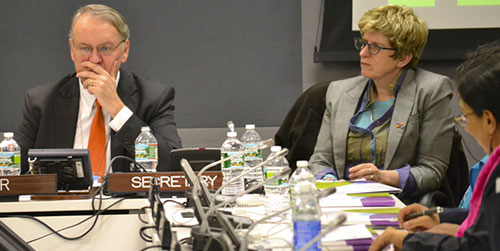 A common thread in these discussions included the pervasive, yet often hidden, nature of gender violence and the depth of its consequences for survivors, many of whom are the most vulnerable and powerless members of society. Another common theme was the need to ensure that survivors can obtain timely, sensitive and appropriate services and support.

Launching a package of critical services for survivors

All survivors of gender-based violence should have access to a core package of critical services, UNFPA Executive Director Dr. Babatunde Osotimehin noted in a 7 March panel. UNFPA and UN Women are initiating the roll out of such a package at country level, beginning with the development of standards of service delivery. Components of the package may include immediate health care and effective police responses, as well as psychological support and counselling; legal advice and protection orders; as well as  social assistance.

“While UNFPA realizes that services alone will not address the deeply entrenched nature and vast scale of this issue, they can provide a crucial turning point for women and girls experiencing violence,” said Dr. Osotimehin..

The quality and consistency of services now vary widely, according to UN Women Executive Director Michelle Bachelet, and can be vastly improved through globally agreed standards and guidelines, as recommended by the UN Secretary-General in his report onproviding multi-sectoral services and responses.

“To move forward, every victim of violence must have prompt access to the full range of services, including sexual and reproductive health services, and support to ensure mental and physical health and well-being, safety and other needs,” said Ms. Bachelet. Too many survivors meet with ill-informed, insensitive or dismissive responses, which fosters a culture of hopelessness and impunity, she said.

Child marriage, a form of violence rooted in rural poverty

Dr. Babatunde Osotimehin with other panelist at the Too Young to Wed  event. Photo: UNFPA

Every day, some 39,000 girls are wed before their 18th birthday. Unless current trends change, 140 million girls expected to marry before the age of 18, 50 million under the age of 15. These were some of the facts brought to light in Too Young to Wed panel jointly sponsored by the governments of Bangladesh, Canada and  Malawi.

Despite the physical damage and the persistent discrimination to young girls, little progress has been made toward ending the practice of child marriage. In fact, the problem threatens to increase with the expanding youth population in the developing world.

But this is not inevitable, said Archbishop Desmond Tutu in a video message. “Change can happen in a generation,” he said. “I know this. I have seen it happen.”

The other panelists spoke of the dynamics that hold the tradition in place, mostly in impoverished rural areas, and the interventions needed to reverse these social norms. “We need to give girls the chance to forge their own identities and reach their full potential,” said Dr. Osotimehin. He added that the low status of women was a root cause for child marriage and and other forms of gender violence.

Laws against child marriage are already in place in most countries, panelists noted, so avenues for reversing the trend need to encourage girl's education and universal marriage registration as well as influencing religious leaders and other custodians of cultural norms. These vary from culture to culture, noted Lakshmi Sundaran, global coordinator for Girls Not Brides.

A highlight of the event was a video message from Mereso Kiluso, a Tanzanian mother of five, now in her 20s, who was married at 14 to an abusive man in his 70s. She was hoping to come to New York to tell her story in person, but the bureaucratic hurdles proved insurmountable for her.

The importance of – and difficulty in collecting – quality data

“The growing attention to gender-based violence has increased the demand for quality data,” said Anne-Birgitte Albrectsen, UNFPA Deputy Executive Director (Management) at a 6 March panel on the role of data in addressing and preventing such violence. “Everyone is trying to get a handle on the problem,” she continued. “But because of the sensitivity and stigma that surrounds this issue, it is very difficult.”

Those difficulties were elaborated by other members of the panel. The subject itself is so fraught, according to Henrica Jansen, a global expert, that in some cases surveys cannot even include the words “violence against women” in the title, which needs to be framed in terms of family health and safety. Interviewers need extensive training, strict confidentiality needs to be maintained, and difficult logistics have to be overcome.

Yet the results can be transformative, for government officials, interviewers and interviewees alike. In some cases, according to Ms. Jansen, the very fact of being able to have their experiences of abuse taken seriously can be life-changing for women.