Dignity and strength: Venezuelan refugees and migrants in Colombia

CÚCUTA, Colombia – Not long ago, 15-year-old Nelsmar attended a middle-class school in central Venezuela. That was before her family was uprooted by the economic and humanitarian crisis in her country, which has pushed nearly 3.9 million persons to migrate or flee, according to recent estimates of the Coordination Platform for Refugees and Migrants from Venezuela.

Nelsmar’s family made the move over a year ago. They walked for eight days, and spent the rest of the journey traveling by bus, before reaching the border with Colombia. When they arrived in the border city of Cúcuta, she thought the worst was over – but she was wrong.

For weeks, Nelsmar slept either on the street or in a boarding house with shared toilet facilities. Her family struggled to access shampoo, sanitary napkins or even a flashlight to light the way at night.

“When you don’t have the means to bathe or change clothes, or you don’t have enough money, something as natural as one’s menstrual period becomes a real challenge,” Nelsmar told UNFPA.

There are 1.2 million Venezuelan migrants and refugees living in Colombia, and large numbers continue to pour over the border. Many bypass immigration controls.

The mass displacement has led to a heightened risk of sexual violence and exploitation. According to the organization CEPAZ, some 37 per cent of migrant women have reportedly experienced some form of violence. Many migrants are also in need of health services.

UNFPA is working with the government and humanitarian partners to help women receive reproductive health care, including access to maternal health care, contraceptives and other critical services.

UNFPA is also distributing dignity kits, which contain hygiene supplies including sanitary napkins, soap and shampoo, as well as information on where to find health and psychosocial support services. And UNFPA is also organizing workshops on gender-based violence, helping vulnerable migrants identify abuse and learn where to find help.

“The aim of our work was to provide opportunities for the discussion of sexual and reproductive rights, prevent gender-based violence and sexual violence, and share information about the places victims of aggression can go to for care,” explained Dildar Salamanca, a UNFPA field coordinator in Cúcuta, the Colombian city that has received the largest number of Venezuelan migrants in recent years.

In Cúcuta and the city of Maicao, some 2,300 dignity kits have been distributed, and 2,600 women have been reached with contraceptives. More than 2,300 women and adolescents have received information about sexual and reproductive health and gender-based violence.

Despite the extraordinary challenges, Mr. Salamanca says he has seen that “migrant women and adolescent girls are extremely strong, resilient and capable of rising above the hostility of life.”

Nelsmar is one such example.

Today, she is living in Cúcuta, where she attends a new school and watches over her siblings when her parents work. She has even joined a group of volunteers who meet on Saturdays to work on youth issues.

Asked how she feels about her situation, she replied firmly, “Well, my dreams are still intact.” 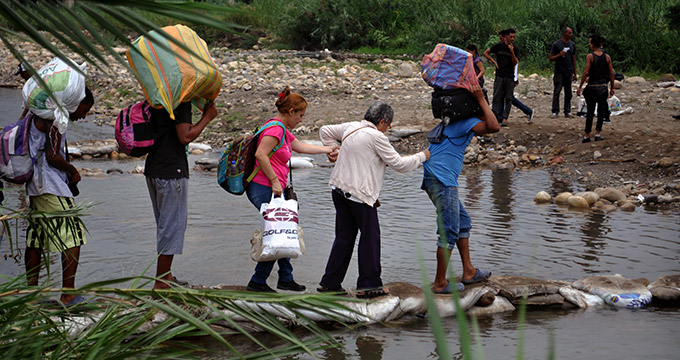 Dignity and strength: Venezuelan refugees and migrants in Colombia