GAZA STRIP, Palestine – “Sometimes I feel that this is a nightmare that I will eventually wake up from, but the nightmare is never-ending and I do not know how much longer I can handle this,” T.C.* told UNFPA.

She is a resident in Al-Bureij camp, one of the poorest and most crowded camps in the Gaza Strip. Her husband, a taxi driver, has long been both physically and verbally abusive, but the situation took a dramatic turn for the worse under the COVID-19 pandemic.

The abuse became a daily occurrence. T.C. felt she was “not living anymore,” she said.

Gender-based violence is a serious concern under even normal circumstances. A 2019 survey by the Palestinian Central Bureau of Statistics found that almost 4 out of 10 women in Gaza have endured violence. But today, with households facing lockdown, financial pressures and anxiety related to the pandemic, experts say there has been a dramatic increase in calls for help.

Yet support for survivors of gender-based violence has been curtailed due to the movement restrictions. Access to safe spaces and in-person counselling have been significantly reduced and, in some cases, totally suspended.

Organizations are racing to adapt to these new circumstances, often without adequate funding.

More than 15 West Bank organizations specializing in services for survivors of gender-based violence have shifted to remote operations, and nine such organizations in Gaza have made the switch.

These groups – all part of the Gender-based Violence sub-cluster, a humanitarian response mechanism led by UNFPA – have established hotlines and online chat groups to provide counselling and emergency referrals, and are spreading awareness about these services via television, radio and social media.

The organizations are also distributing food parcels and dignity kits, which contain hygiene items including soap and sanitary napkins, as well as information about how to receive further support and protection, to at-risk families and survivors of violence, including those in quarantine. Vulnerable women and families have been given contact information for lawyers and social and health workers, including psychologists, who can provide mental health and psychosocial support, legal aid and case management.

T.C. was one of those people able to receive support.

She began to discreetly communicate with a counsellor at the Palestinian Working Women Society for Development (PWWSD), often calling when her husband is out of the house. She has been informed about protection services, including local shelters, where she and her children can go. She has also learned about stress-relief and anger-management techniques.

“I feel that the situation has become more bearable,” she said recently.

Since 22 March, PWWSD has provided more than 1,400 remote consultations and 1,100 phone-counselling sessions in Gaza and the West Bank. Nearly 1,000 of the sessions and calls involved gender-based violence.

The pandemic has taken its toll on many people in the community. Service providers say they have seen an increase in calls for mental health care and psychosocial services unrelated to domestic violence.

“I feel overwhelmed all the time,” 38-year-old Manar* said. She lives in the outskirts of Hebron, and is currently sheltering at home with her six children, who are between the ages of 5 and 18. Her husband works away from the home, and Manar fears he could fall ill.

She has been receiving remote counselling from the UNFPA-supported Palestinian Family and Protection Association, which provides free health, psychosocial and legal support.

“Manar was crying when she called me,” said Maysah Shalaldeh, a social worker from the organization. “Manar had heard about COVID-19 and was afraid someone from her family would get infected… She was crying and was hardly able to speak.”

The two spent hours on the phone, and Ms. Shalaldeh took care to explain how COVID-19 is transmitted and can be prevented. Together, they came up with plans to manage the risks her husband and family are exposed to, such as creating a quarantine space in the home.

Today, lockdown measures are easing in Palestine, but services have not yet returned to normal. UNFPA’s support to service providers, remote-counselling programmes, and other essential support is ongoing. 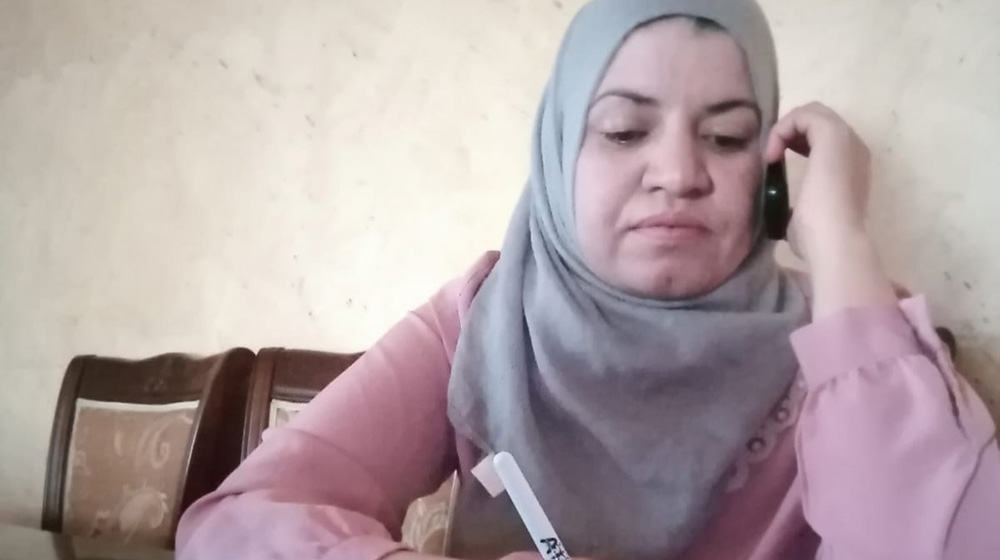