Delivering Safely, Even in the Refugee Camps of Uganda

KAMWENGE DISTRICT, Uganda — Alice Furaha, 22 years old, was five months pregnant when she fled her home in Eastern Congo last May. When she arrived at the border with Uganda, Alice was taken to the transit centre in Kisoro and eventually transferred to Rwamwanja settlement camp in the Kamwenge district.

Having experienced a still birth just last year, she was now worried about the risks of delivering in a refugee camp.

In the past eight months, fighting between the Government and  the M23 rebel group in the Eastern part of the Democratic Republic of Congo (DRC) has intensified. The rebellion has forced over 60,000 Congolese to flee to neighbouring countries and has displaced nearly 600,000 people within the country. The sudden influx of refugees has strained existing services in the Kamwenge district in the South West region of Uganda, and addressing the needs of some 300 pregnant women was a particular challenge.

Women were seen delivering in their tents, and only one ambulance was available for 10 to 12 women each month who experienced complications and needed emergency obstetric care. Medical equipment and supplies as well as human resources for health are not sufficient to provide quality lifesaving pregnancy and delivery care, according to a report by the Central Emergency Response Fund (CERF), which has provided more than $200,000 to UNFPA, as part of an overall contribution of $6.8 million to the emergency situation in Uganda. 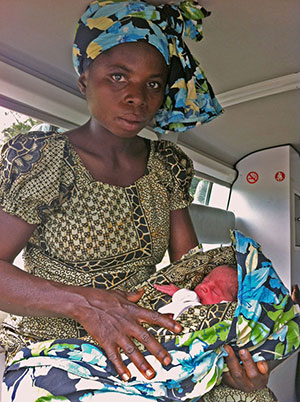 On 26 August Alice delivered a healthy baby boy at Fort Portal regional referral Hospital, about 80 kilometres from the settlement camp. "When labour pains started, I went to the Ramwanja Health Centre expecting that everything would be ok," Alice recalls. "I was shocked to be told by the midwife that I was going to be referred to Fort Portal Referral Hospital because my baby was in distress." Luckily, an ambulance of the Uganda Red Cross Society was mobilized with support from UNFPA so that Alice could be transferred and receive the care she needed.

She was lucky, because ambulances are in short supply. In a period of one month, four babies perished because women could not get emergency care quickly enough. In those cases, fortunately, the mothers survived. However, when the only available ambulance was busy taking one woman to the regional referral hospital, another emergency case had to wait for more than six hours to receive  care.

CERF funding enabled the Uganda Red Cross to get one of its ambulances re-deployed for mothers in the refugee settlement who need emergency obstetric care. This simple service has significantly increased the ability to get emergency cases to the hospital. It helped save the life of Alice and her baby.

The additional funding has helped in other ways as well, according to the UNFPA Representative Janet Jackson. .
“Thanks to the CERF funding, we have been able to introduce new dimensions to the registration process for new refugees who arrive in the camps," she said. "Every pregnant woman is registered as she arrives in the camp. Also, volunteers have been mobilized from the host community and from the refugees to ensure that women access care during pregnancy, child birth, and afterwards. This includes ambulance services in the event of emergencies in addition to receiving a dignity kit.

"Besides, the volunteers have been trained to provide support to survivors of gender-based violence. All these are innovations that would not have been possible without the CERF funding,” Ms. Jackson says.

Delivering Safely, Even in the Refugee Camps of Uganda