CYBER CITY, Jordan- To one new mother, whose baby she delivered safely in a clinic, she is like a second mother. To another, whose breast cancer she detected, she is a ‘saving angel.’

After nearly 30 years in nursing and midwifery, Fathieh Ayyad still considers her work to be extremely satisfying. She now cares for Syrian refugees at the UNFPA-supported clinic operated by Jordanian Health Aid Society at the Cyber City complex “I am really glad that I can contribute in putting a smile on each woman’s face,” says Ayyad.

It was at the UNFPA/Jordanian Health society clinic in Cyber City that Ayyad was able to help Kholoud, who had fled the violence in Syria, deliver safely. “I had no other option but to help her give birth at the clinic,” says the 50-year-old midwife.

Because of the tender delivery and post-natal care she and her baby received, Kholoud, and some of the other new mothers, call her Um Ahmad (‘Um’ means ‘mother’ in Arabic).

Ayyad was also described as a saving angel by a woman who is now undergoing treatment for breast cancer. 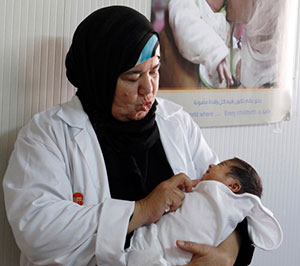 Ayyad referred Huda, who was in her eighth month of pregnancy, to a hospital for a thorough check after she complained of a mass in her breast. There, Huda underwent a Caesarean section to give birth to baby girl Yasmeen so that she could proceed with the prescribed treatment.

“Without Um Ayyad’s diagnosis, I would have never heard of breast cancer,” Huda said. After lab results following the birth of her baby, Huda will now have to undergo a mastectomy – but her chances of survival are good.

A long and rewarding career

Ayyad’s career as a midwife started at the young age of 15, due to the difficult financial situation of her family. Her father’s business was not profitable, and she had to work to help him pay back his debts.

In those days, working in nursing was considered a taboo most Jordanian women. Being a nurse requires working night shifts, and spending nights away from home was frowned upon. But Ayyad had the support of her family. “My father stood by my side and refused to listen to my relatives who did not want me to work in nursing,” she said.

After a distinguished record in nursing college, Ayyad received an appointment in the public hospital in her home town of Ramtha where she worked for five years before educating women on reproductive health issues at a maternity centre.

Although Ayyad was married at the age of 25, and eventually had six children, she continued her career, with the support of her husband and help from her mother, who helped take care of her six children. The Ministry of Health hired her to conduct home visits to raise the awareness of women on family planning, and the importance of ante- and post-natal care.
Earlier this year, after 27 years of working for the Ministry of Health, Ayyad was tasked to work at a transit centre for Syrian refugees who arrive at the Jordanian borders.
--